The Jawaharlal Nehru University has issued a notice to the students of the Sutlej Hostel of the university that their mess facilities will immediately be stopped if they fail to clear their outstanding bills by November 14. The students had been protesting against the new hostel rules and fee hikes the administration had proposed in its Draft Hostel Manual which was allegedly passed without any representation from the JNU Students' Union. Former JNUSU President Geeta Kumari, who is still a student of the university took to Facebook to make the notice public. She called for complete non-cooperation with the administration till they roll back the new hostel manual. "Do not pay your mess we will see who will stop our food. We cook and eat on our own. Without affordable education, we are anyway as good as dead," said Geeta. "Starve us but this fight will continue till the end. And appeal to all the residents and presidents to resist this move by the admin. Our scholarships do not come till the end of the semester and you are asking for money out of the blue," she added.

Apeksha Priyadarshini, a member of the current set of representatives and a member of the Bhagat Singh Ambedkar Students Organisation said that the Mahi/Mandavi hostel faced the same threat but dealt with it democratically. "They tried doing this in one more hostel, Mahi/Mandavi, as well but the students conducted a GBM and rejected it," she said.

The JNU students had rocked the nation's capital on Monday when they marched to the AICTE Auditorium at 8 am on November 11 where the convocation was going on. Students present at the scene said that they were met with barricades and a huge police force along with a CRPF battalion who were mobilising water canons and tear gases. The students alleged that the police were in civil dresses and not their uniforms to probably help mingle with civilians. "Why are our students not being let inside? It is our convocation after all. Why is the Delhi Police even involved? This is an internal matter which should be addressed by the administration," said N Sai Balaji, the Former President of the JNU Students Union. The Vice-President M Venkaiah Naidu and the HRD Minister Ramesh Pokhriyal 'Nishank' are the chief guest and guest of honour for the convocation and will be handing over degrees to those who completed their PhDs from July 1, 2018, to June 30, 2019. The protesting students had earlier declared that they will not receive the degrees but are not boycotting the event. 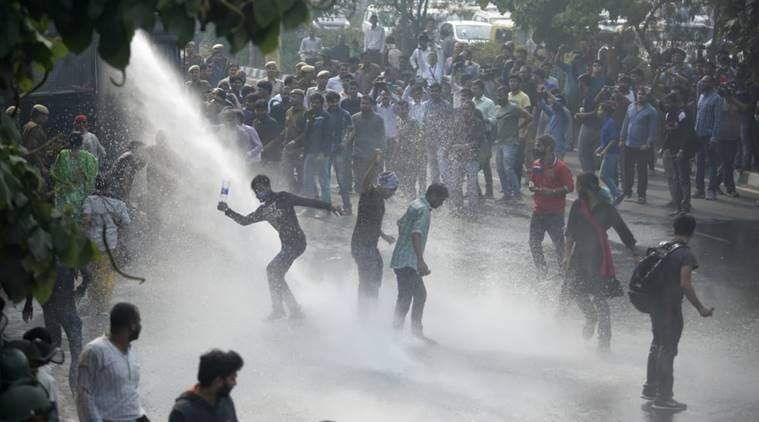