The victim, identified as Absar Zahoor Dhar, from Srinagar in Kashmir, suffered grievous injuries to his hand, head, and face

Post the Pulwama terror attack in which 49 CRPF personnel were killed, assaults on innocent Kashmiri students seem to be continuing. In a shocking development, a 24-year-old Kashmiri student — who freelanced as a part-time model on the fashion circuit — was brutally beaten up by four youths in Bengaluru on March 20, 2019.

The victim, identified as Absar Zahoor Dhar, a 24-year-old from Srinagar, Kashmir, was attacked by miscreants in the AECS Layout near HAL in southeast Bengaluru. Absar, who is a civil engineering student at the CMRIT College and self-funds his education through modelling, suffered severe injuries on his head and was rushed to a nearby hospital. Absar had no idea why he was being attacked, his friend stated in a dismayed tweet. 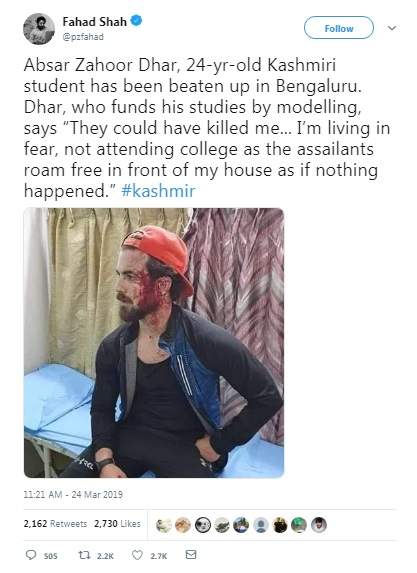 A case has been registered against the attackers at the HAL police station. Based on the complaint filed by Absar, the HAL police officials arrested four men, identified as Nithin (25), Manjesh (21), Gautham (26), and Abhi alias Santhosh (20), who are all residents of Kundalahalli Colony. Absar told Deccan Herald that he continues to live in fear and has not been attending his classes, as all the four accused in the attack have obtained bail. "I am living in fear and not attending college as the assailants roam free in front of my house as if nothing has happened,” Absar reportedly said.

The issue that gave birth to the conflict began on March 19 when Nithin, one of the miscreants, accused Absar of eve-teasing while he was at a cafe near his college. Absar had politely refuted their claim, following which Nithin and his associates warned him and left. Absar was attacked the following day (March 20) and was beaten up with iron rods outside an ice cream parlour in AECS Layout.

Absar's friend, who came in a motorcycle, managed to get him out of the mess and to a nearby hospital. "My friends rushed to my help or else they could have killed me," Absar added.