Dr Mitra has also informed that the meeting will be recorded and a copy will be given to the doctors. But he has not mentioned anything about the media being present at the meeting

Director of Medical Education, Government of West Bengal, Dr PK Mitra, in a letter addressed to the protesting doctors of the state, has urged them to reach Nabanna, the state secretariat by 2.30 pm on June 17 for a meeting with CM Mamata Banerjee to discuss their demands for better security at medical colleges.

Dr Mitra has also informed that the meeting will be recorded and a copy will be given to the doctors. But he has not mentioned anything about the media being present at the meeting, a demand that the agitating medics had stressed on to ensure transparency. "I also request you to immediately communicate to me names of the two representatives from each medical college to enable us to keep your security passes ready," Dr Mitra wrote in his letter.

The protesting junior doctors earlier on Monday had claimed that they have not received any official invite from the Chief Minister's Office for a meeting. Addressing the media, the medical students and doctors said that they want to talk to the CM and discuss their demands but will only do so if it's not a closed door meeting and the media is allowed to telecast live. "We still want to sit for a discussion but we want it to be an open door discussion where representatives of all medical colleges are present along with the media," said one of the agitating students while addressing the media earlier on Monday. 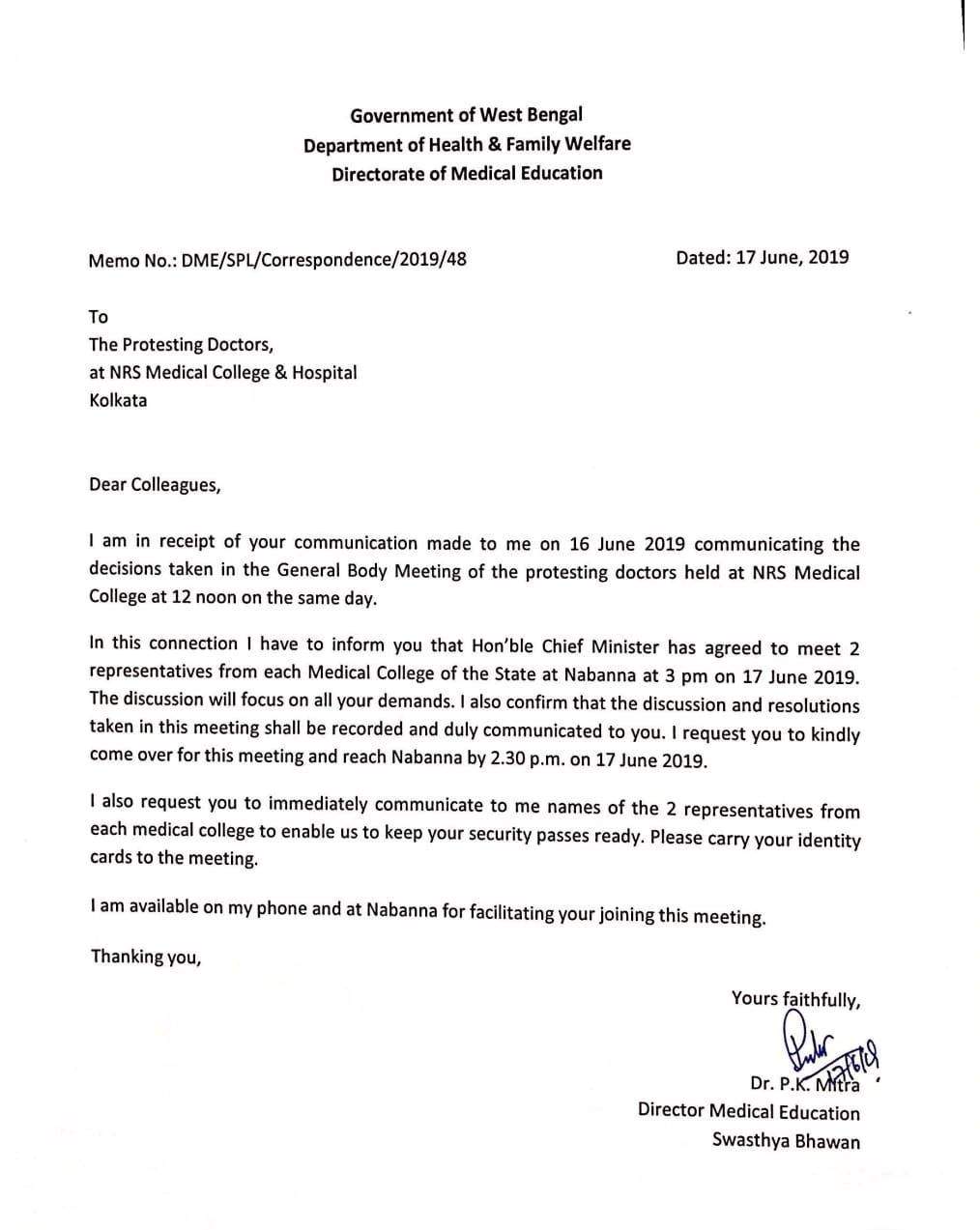 Healthcare services across Kerala were affected as doctors of state-run hospitals boycotted work for two hours on Monday and those of the private hospitals supporting the 24-hour nationwide strike being observed in support of the protests in West Bengal. Doctors in several hospitals across Odisha and Goa also resorted to cease work on Monday in response to a nation-wide strike called by the Indian Medical Association (IMA).

More than 40,000 doctors in Maharashtra are boycotting work on Monday as part of a strike call given by their apex body IMA in support of their agitating colleagues in West Bengal, an official said. Healthcare services at government and private hospitals in the national capital will be hit on Monday as scores of doctors, including those at AIIMS, have decided to boycott work as well.  Hundreds of private hospitals, nursing homes and clinics in Karnataka suspended outpatient services on Monday following a call by the Indian Medical Association to hold a day-long strike.

The Telangana Junior Doctors Association (TJUDA) Sunday threatened to go on an indefinite strike against the state governments decision to enhance the retirement age of doctors in medical college hospitals from 58 to 65.

The IMA said all outpatient departments (OPDs), routine operation theatre services and ward visits will be withdrawn for 24 hours from 6 am on Monday to 6 am Tuesday. Emergency and casualty services will continue to function, it said.

The Delhi Medical Association (DMA) and the Federation of Resident Doctors Association (FORDA) also extended their support to the strike call. "Emergent Executive Committee Meeting convened today decided to support the call given by IMA for withdrawal of non-essential services on 17th June (Monday) for 24 hours (6am to 6am) to protest against violence against doctors and hospitals. All clinics, nursing homes, diagnostic centrés and hospitals are requested to shut down routine services," a statement by DMA said. Junior doctors in West Bengal are on strike since June 11 after two of their colleagues were reportedly attacked and seriously injured by relatives of a patient who died at the NRS Medical College and Hospital in Kolkata.

In a show of solidarity, medical practitioners across the country chose not to work, leaving patients in the lurch. Union Health Minister Harsh Vardhan on Saturday asked states to consider enacting specific legislation for protecting doctors and medical professionals from any form of violence. The apex medical body, IMA, has demanded a comprehensive central law in dealing with violence on doctors and healthcare staff.

Security measures and the determinants leading to violence should also be addressed, it said in a statement. Exemplary punishment for perpetrators of violence should be a component of the central law and suitable amendments be brought in the Indian Penal Code (IPC) and Code of Criminal Procedure (CrPC), the IMA said.

The medical body had launched a four-day nationwide protest from Friday and wrote to Union Home Minister Amit Shah demanding enactment of the central law to check violence against healthcare workers.