Injured Nil Ratan Sircar Medical College and Hospital (NRSMCH) intern Paribaha Mukhopadhyay is recuperating well at Institute of Neurosciences Kolkata and could be released in a few days. According to reports, Paribaha, whose skull had been dented by a stone during a clash between junior doctors and relatives of a patient at NRSMCH in Kolkata on June 10, will need another surgery within three months to replace the fractured part of his bone that was removed during the initial operation.

"We have seen Dr Paribaha Mukhopadhyay today. He is recovering well from his severe head injury. He still has a few symptoms mostly from anxiety. He has been assured. All the parameters including a CT scan of the brain show no additional problem," said a medical report issued Monday morning from the Insitute of Neurosciences, Kolkata where the junior doctor was admitted. Paribaha is stable and is out of the Intensive Care Unit. 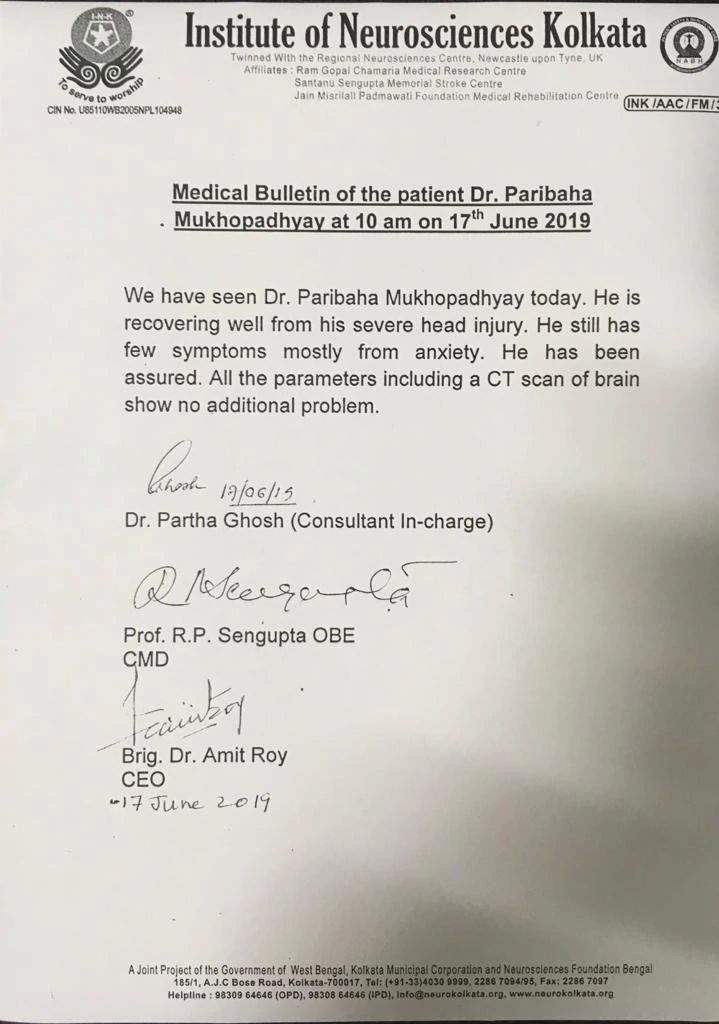 "Mukhopadhyay will have to undergo a cranioplasty to replace the injured part of the skull bone that has been removed. But the procedure can only be done after he has recovered sufficiently which could be another three months," Partha Ghosh, one of the doctors who operated on the intern told TOI.

The clash in which Paribaha was injured had taken place on June 10 after Mohammed Shahid, a 75-year-old patient died due to alleged negligence, police said Tuesday. Regular services at NRSMCH were disrupted as the junior doctors began a sit-in, demanding better security. Family members of Mohammed Shahid, a resident of Tangra, allegedly assaulted some junior doctors after he died. As a result, a clash broke out, virtually turning the hospital premises into a battleground.

Doctors all over the country have been protesting for the past few days demanding proper security. Amid this stand-off between the doctors of Bengal and its government, many on social media claimed that Paribaha has passed away succumbing to his injury. A Facebook Page named Renu Pandeya, Samajsevika posted a photo of the doctor and claimed that he has passed away, which has been taken down an hour after being uploaded and shared by others. The post was discovered to fake after West Bengal Governor Keshari Nath Tripathi went to meet the injured doctor on Friday evening, and later told media persons present there that the junior doctor is doing fine.

On June 13, a Times Now journalist Mayukh Ranjan Ghosh tweeted a video of Paribaha in which he can be seen speaking to someone in the hospital.