Prabu said he never went to a private coaching centre as his school provided him with extra classes.

Despite having to spend almost two hours in physiotherapy every day, KK Karvanna Prabhu managed to secure the fifth rank under the male physically-challenged category in NEET. Prabhu, who got an All India Rank of 15,623 with 572 marks, said since birth he has had problems walking. But it's something that never stopped him from moving forward. “I see myself on par with a normal student. I always wanted to become a doctor just like my parents. I am happy that I have taken the first step towards achieving my goal.” 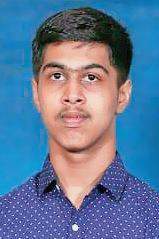 He now wants to pursue education either in JIPMER or Madras Medical College. Prabu said he never went to a private coaching centre as his school provided him with extra classes. After school, he spent three to four hours doing some self-study.“I genuinely believe that one should not consider disability as a curse and should make it their strength. With confidence and hard work, we can achieve what we aspire to,” he said. A native of Karur, he studied in Namakkal. “This was my first attempt and to be honest I expected to do a little better, but I am not too disappointed with my score," Prabhu said.

“As I have to spend at least an hour-and-a-half to two hours every day on my physiotherapy sessions, I could not do study for more than three to four hours a day,” he said, adding one does not have to spend 10 to 12 hours for it. “Instead of spending hours on memorising answers, students should focus on understanding concepts and practice it,” he said. Prabu wants to become a psychiatrist. His father K Kannan, a surgeon, said, “Since childhood, he is a bright student. I am very happy for him.”