Poraatam Pliss: How Chennai turned up at a permission-less anti-CAA protest with just the right amount of gethu

There was a slight unease with the police walking through the crowds quietly. But then the speaker quickly thanked the police for helping the crowd despite revoking permission

Just before we got out of the cab, I alerted the photographer to wear his press tag, just in case someone stopped us from entering. With the police revoking permission for the anti-CAA protest at Valluvar Kottam in Chennai — at the last minute — nobody was really sure what to expect. So there was some slight nervousness about what could ensure during the cab ride too. Those Jamia images are still fresh. But somehow, the minute we stepped out, I felt a sudden adrenaline shoot through my drugged up, 101-degree fevered-up body.

I'd been waiting to go to one of these protests for so long. 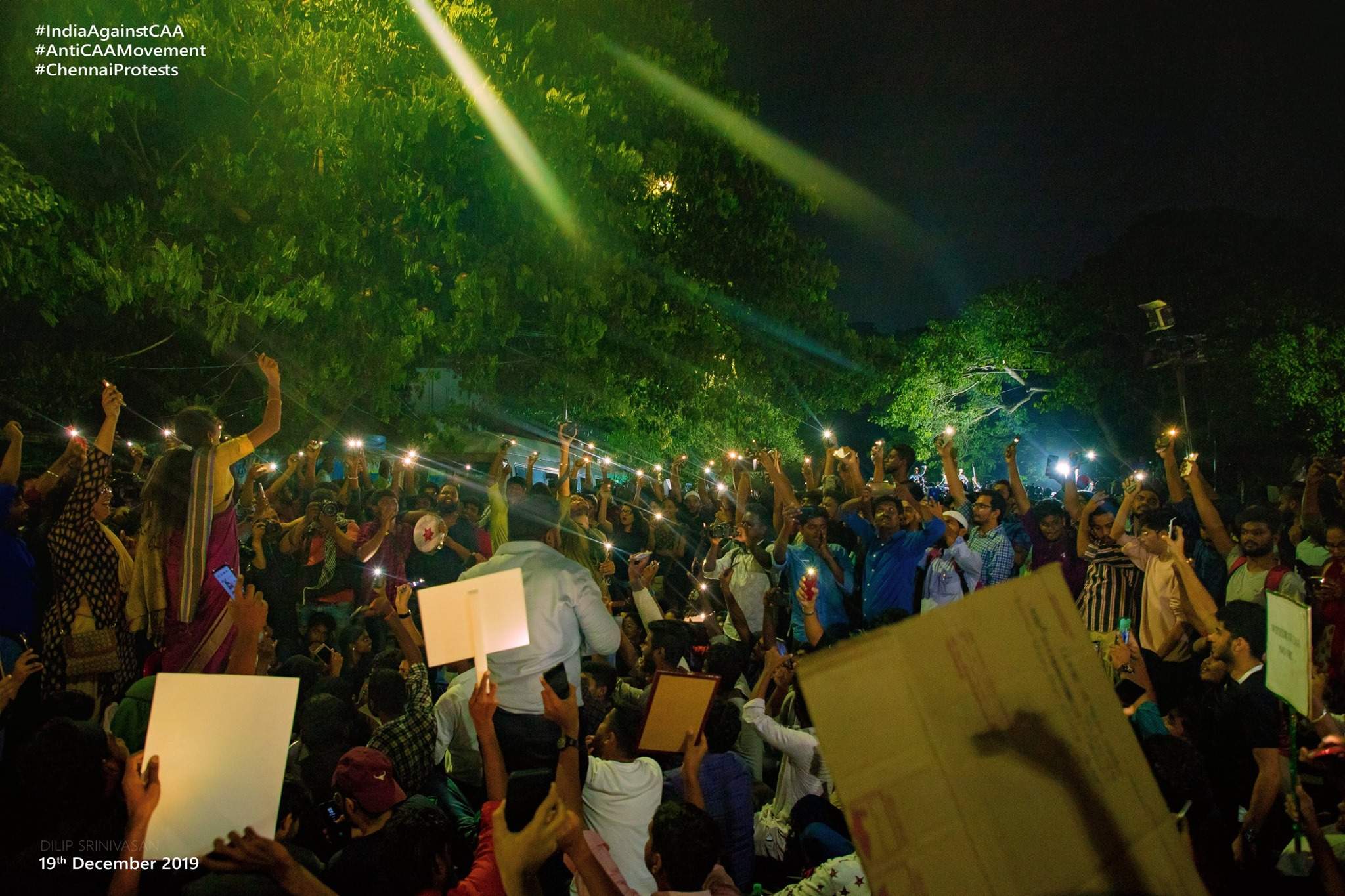 Keeping khaki at one arm distance

At one point, all we could see was khaki, hordes and hordes of policemen but no, they were not stopping anyone from entering. People entered in a single file to join the masses on the other side of the barricades. As soon as we got in, I quickly removed the tag and shoved it inside my bag, (I confess this, risking the fact that my editor will read this piece, even before the rest of you do). When I sought permission I was told I could go, if it was for a dual purpose. Which is the honest truth, anyway.

But I also wanted to be there just as another citizen of the planet. I would have liked to have said India, but that's a bit of a hazy concept at this point.

Thalaivaa, what you are telling?

The protest was loud, passionate, colourful and even funny. Even though Rajnikanth just tweeted quite a vague message about being against 'violence happening everywhere', at yesterday's protest, people used his dialogue from Pa Ranjith's Kabali as a slogan — We want to tell Modi-Shah that we will not accept their CAA, NRC and we will say it with 'Gethu'. There was sloganeering, nice and loud. 'Azaadi' echoed through the noise of the traffic at the Valluvar Kottam junction. Joining in the chorus was both an overwhelming and humbling experience, there's nothing quite like the high you get from feeling you are doing something you believed in and there were others who were doing it with you.

There was a slight unease with the police walking through the crowds quietly. But then the speaker quickly thanked the police for helping the crowd despite revoking permission. So some of us heaved a sigh of relief. So we could stay a little longer, without any trouble. 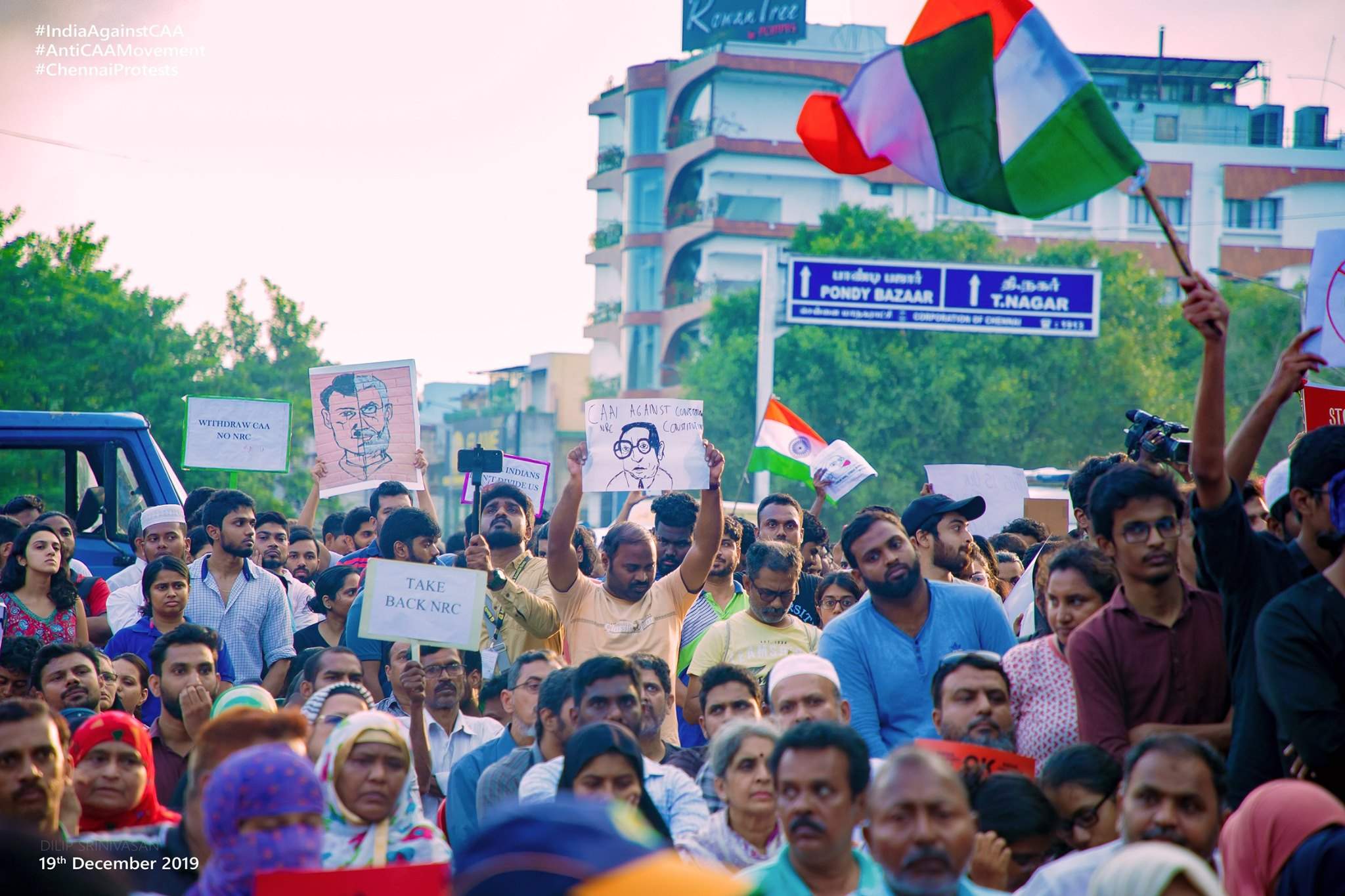 Dear Modiji, take it my Hindi

Chennai, as we all know is home to people from across the country. And so at the protest too, there was a mix of people, yet everyone sang along to the Tamil slogans too. But that didn't mean there were no Hindi slogans, in fact one of the activists joked about how they were forced to learn Hindi just so they could 'scold Modi, Shah' in a language they can understand. "We are a state that refuses to accept Hindi as the national language but that doesn't mean we won't learn Hindi to rise against you. We will talk to you in a language you understand, don't worry!" a protester said.

Heads of various groups, NGOs, civil rights activists, transgender activists all took the stage, taking turns to raise their own slogans, from Suresh from PUCL's 'With your head held high' to TM Krishna's rendition of Gandhi's popular Raghupathi Raghav. When actor Siddharth who has been earning high praise for being vocal about the government's policies arrived, the entire crowd sang an off-tune but heartfelt 'Welcome, Welcome' even though he seemed to prefer staying among the crowd.

Fun in the times of frustration

Even though fear had brought the crowd together, the people seemed to have found both hope and solace while they stood shoulder to shoulder. Yelling the same words, clapping in unison, laughing together and condemning together. They also snacked on groundnuts, sundal and some chukku kaapi as well.

Thol Thirumavaalavan was the only MP to arrive at the protests, he said he came as soon as he knew that the people had gathered at Valluvar Kottam. The MP warned that the CAA was not a sudden bad move by the government, but they had made a series of bad, discriminatory policies ever since they came to power and that we must stand together against every single one of them. "From the time of Gowalkar, the Sangh has imagined a Hindu state. What the Sangh hates more than Muslims is the constitution, democracy, social justice and secularism," he said, as the crowd applauded.

Just as Thirumavaalavan left, the sun began to set as well. The sundal seller left with a smile, so did many others but not without the promise that they would be back the next day. There was a certain group that settled down and did want to leave without making a statement. The hordes of police that swarmed in and made sure they left the location. But they did, they weren't going anywhere.