The Jamia Coordination Committee that was formed after the recent incident of police brutality, organised a non-violent protest called 'Songs of Resistance' on campus

"Dilli police baat karo, aao humare saath chalo" (Delhi Police, talk to us. Come along and walk with us). Does that ring a bell? On Thursday, crowds of protesters at Jantar Mantar, peacefully demonstrating against the Citizenship Amendment Act and the National Register of Citizens, were seen kneeling in front of Delhi Police personnel, offering roses and their unity. While there have been instances of violence in several states like in Uttar Pradesh, Karnataka and more, protestors have also come up with interesting and creative means to express their dissent in a peaceful manner. Jamia Millia Islamia, which has been the epicentre of students' protests, witnessed a one-of-a-kind method of resistance on Friday afternoon.

The Jamia Coordination Committee that was formed after the recent incident of police brutality, organised a non-violent protest called Songs of Resistance near Gate no 7 at the varsity. The protest was in the form of a cultural programme 'Bol Ke Lab Azaad H Tere', where several young artists came in to perform their songs, poems and plays to express their solidarity with the ones who are fighting together against the controversial CAA and NRC. The programme was followed by a Preamble reading. The five main artists who were a part of the programme included Aseem Sudan, Nabiya Khan, Poojan Sahil, Kaushik Raj and Aamir Aziz. 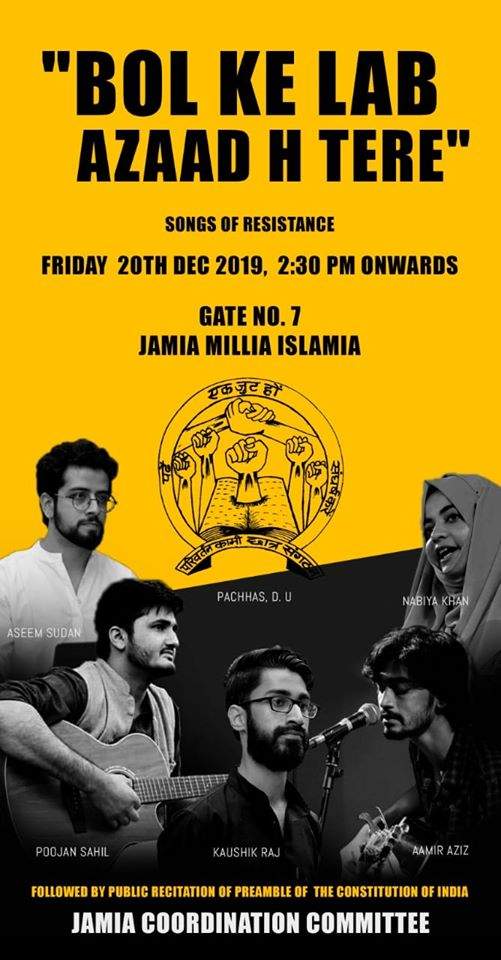 "My poems are a protest against the tyranny of these times. I express and explain what I wish to convey to the people through my poems," said Nabiya, one of the artists. Nabiya has been a student at Jamia in the past and is currently pursuing higher studies at Guru Gobind Singh Indraprastha University in Delhi.

Poojan Sahil, who is a known face on YouTube for his social-political parodies and songs of dissent, was also present at Jamia. Speaking about his songs, he said that his songs are meant to "inspire hope, resistance and unity." He added, "Through my songs, my aim is to spread the message of love and unity. To let everyone know that we are together come what may." Poojan is currently a teacher at a school in Delhi. 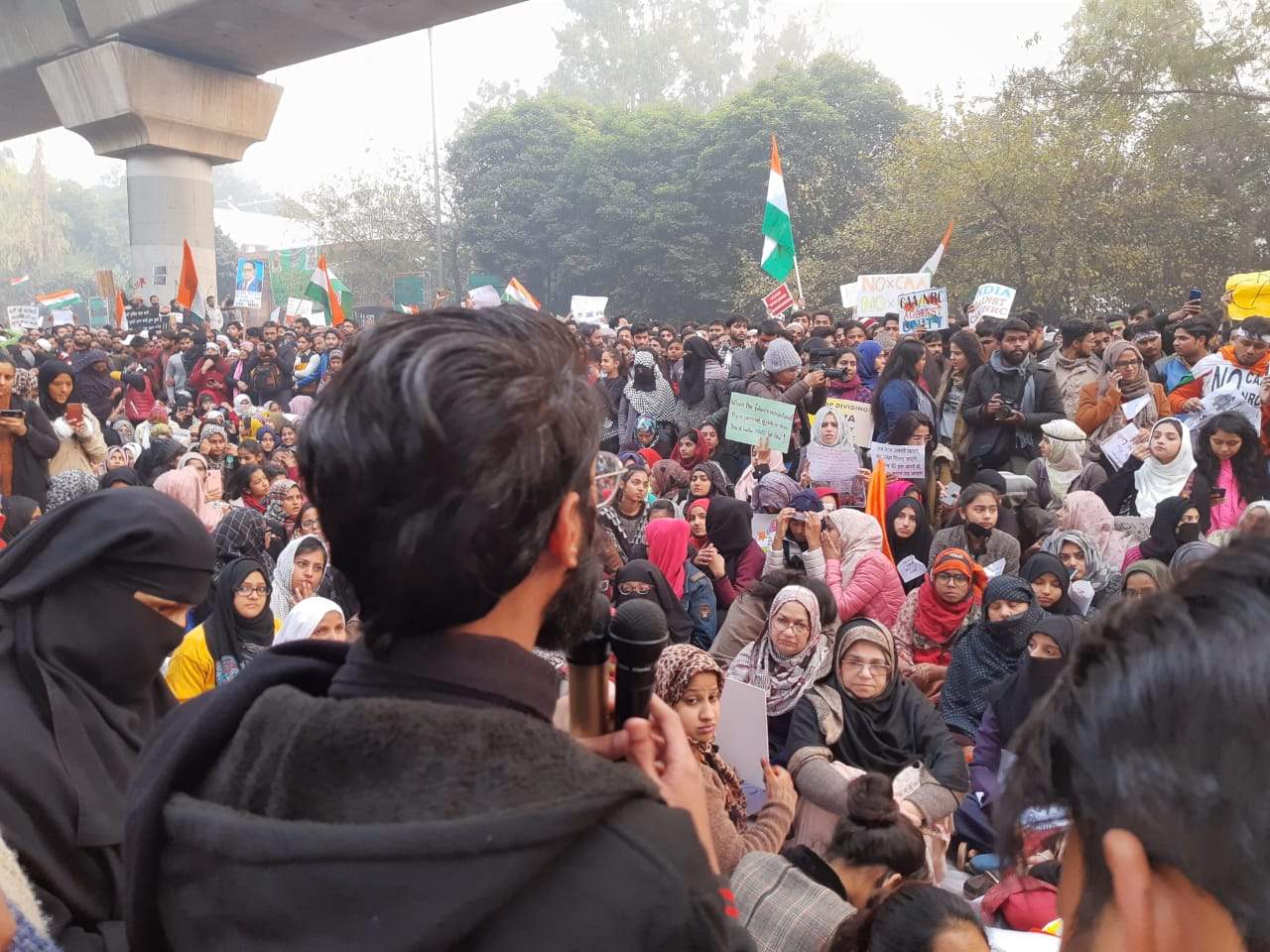 Kaushik Raj, one of the five artists, is also a known face among protestors for his unique poems of dissent. "Jamia has been witnessing all kinds of protests throughout the past week. We have seen the students express dissent in numerous, but non-violent ways. For instance, they protested by creating human chains on both sides of the roads so that they don't block traffic and let the vehicles pass. While protesting against the police brutality, they have been calling speakers, student activists and other students to enthuse the protestors and show support. They get to listen to varied forms of opinion through these events. Today's event also saw variety," said Kaushik. Adding that they are all united for one cause and are known for 'Pratirodh' or resistance. Kaushik was also a part of the Jantar Mantar protest that took place in Delhi on Thursday.

These artists all write their own songs and poems and then read or sing it out to everyone. Providing an example, Kaushik explained one of Poojan's socio-political parody songs. The song from the movie Once upon a time in Mumbai — 'Tum jo aye zindagi mein baat ban gayi' was modified to 'Tum jo aye phir satta mein, vaat lag gayi' (now that you were re-elected, we are in trouble), which, as it might sound, is directed towards the ruling party at the Centre. Scene from the protest by Jamia students

Amidst all the violence witnessed by the students at Jamia, these artists are showing the way forward — protesting peacefully. Explaining how the narrative of protests is changing gradually, Aseem Sudan, one of the artists said, "What I personally feel is that whatever we are trying to tell people explaining why this is wrong, we have to say it in a way that no matter how much the people in power try to manipulate, they are not successful. We need to educate and resist. Every word that is against love is wrong — and this applies to everyone, be it the government in power or the students protesting and even those who are just spectators. We are fighting a war for love to triumph. We will try our best to not let the protest die. The power of the protest is how long we can continue it, not just in numbers." 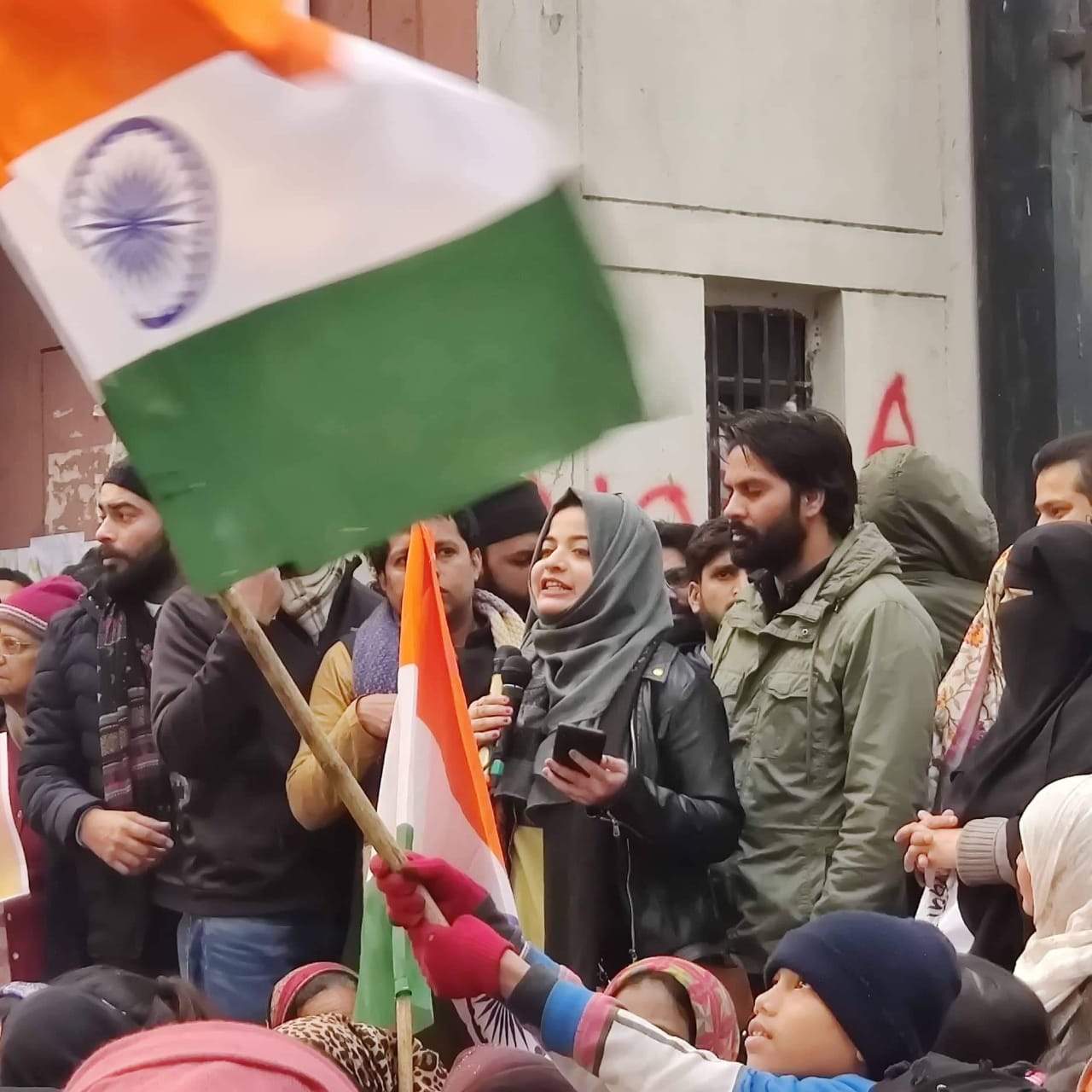 In response to the claims by several government officials that students are being misled or they do not have the right kind of knowledge and that is leading to all these protests, Aseem explained, "We are students, this is what we do. Some of us study the Constitution as a part of our curriculum. We sit down, discuss, educate unlike a lot of who get all their information from mainstream channels, which are quite misleading."

He adds, "On one side the Home Minister Amit Shah is saying that there is no need to be scared of NRC but then again they are saying CAA and NRC will be implemented all over India. They think that the public is mindless and misinformed. Student protest is not a new thing, it has a long history across the world. We have the time and privilege of studying these bills and then sharing the knowledge with our fellow countrymen. Their condescending behaviour seems to stem from the fact that they themselves don't have a culture of reading."

An excerpt from one of Kaushik Raj's poems that he performed: