Arun Jaitley, the go-to man during #ModiSarkar, passed away at 66

The 66-year-old former finance minister was admitted to the All India Institute of Medical Sciences, New Delhi after he complained of breathlessness and restlessness

Former Finance Minister and Bharatiya Janata Party stalwart Arun Jaitley passed away on Saturday at the age of 66 years. He was admitted to AIIMS in Delhi earlier this week after he complained of palpitations and restlessness. He was placed under observation at the hospital’s Cardio-Neuro Centre.

Prime Minister Narendra Modi, Union Home Minister Amit Shah, Defence Minister Rajnath Singh, Health Minister Harsh Vardhan and Lok Sabha Speaker Om Birla were among some of the leaders who had visited the senior BJP leader while he was at the hospital.

In May this year, the former finance minister was admitted to AIIMS for treatment. Earlier also, citing health reasons, the BJP leader did not contest the Lok Sabha elections. After the Modi government came back to power in this year's Lok Sabha elections, he wrote to the Prime Minister stating that he would like to stay away from “any responsibility” on account of his ill health.

He had not been keeping well for the past two years and more. In 2018, Jaitley underwent a kidney transplant surgery, following which he was put under isolation. Four years earlier, in 2014, the senior BJP leader underwent a bariatric surgery to address the excess weight he had gained because he had diabetes.

During the BJP's first term in office, Jaitley was considered to be the prime minister's "go-to" man. He was the one who was given the responsibilities of temporarily handling ministries other than his primary portfolio which was that of finance.

Before his stint as the finance minister under the Narendra Modi-led government from 2014 to 2019, Jaitley was the leader of the Opposition in the Rajya Sabha from 2009 to 2014. Under Atal Bihari Vajpayee’s government between 1999 and 2004, he held multiple cabinet portfolios including commerce, law and justice.

Jaitley studied law and was a senior advocate until he stopped practising in 2009 due to his political duties. During his early days as a student, he was a member of the Akhil Bharatiya Vidyarthi Parishad (ABVP).

Condolences have begun pouring in for the former Union Minister. 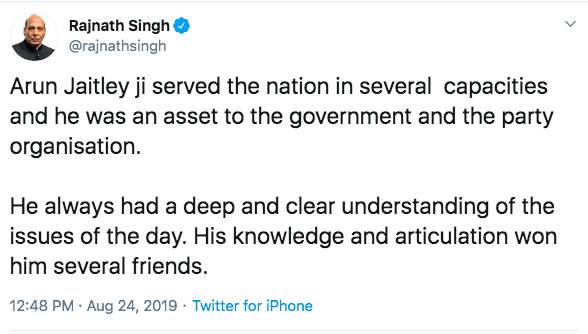 Home Minister Rajnath Singh tweeted saying, "Arun Jaitley Ji served the nation in several capacities and he was an asset to the government and the party organisation." 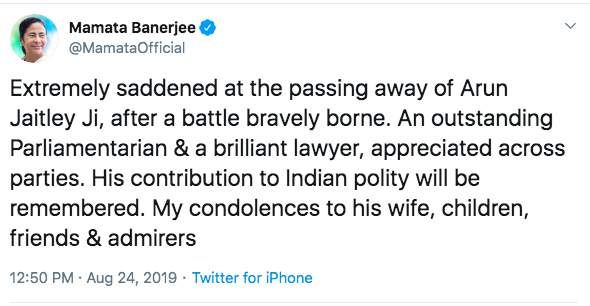 "Extremely saddened at the passing away of Arun Jaitley Ji, after a battle bravely borne. An outstanding Parliamentarian & a brilliant lawyer appreciated across parties," she wrote on Twitter.