#PrayForTheAmazon: Why is everyone talking about the Amazon forest fires?

If you are an active member on social media platforms, then you definitely must have come across the hashtags #PrayforAmazon and #AmazonRainforest in the past few days. Especially, netizens on Twitter have criticised the media for giving more attention to the fire that broke out at Notre Dame earlier this year and other news as compared to the rainforest fires. Users have also called out billionaires for what they perceive as a lack of social concern. If you are sitting miles away, only as a silent spectator to all the hullabaloo, then it is your duty towards the environment to make yourself more aware of the raging forest fires. Because climate change is real and the apocalypse might just be around the corner.

Officials looking closely at the fire said that the Amazon rainforest is burning at a record rate. Earlier this month, Brazil declared a state of emergency after the number of fires in the region has seen a significant rise. So far in 2019, almost 73,000 fires have been detected by Brazil's space research centre INPE. That means an 83 per cent increase from what the numbers were in 2018 and the highest number on record since 2013, a Reuters report said. And since last Thursday, INPE satellites have captured more than 9,500 new forest fires as these raging infernos do not seem to have an end.

Why is it happening?

Among various other reasons cited behind these fires, the increasing numbers this year have been blamed on the Brazilian President Jair Bolsonaro. Bolsonaro took office in January this year and supported developing the Amazon region for farming and mining. Cattle ranching is also considered to be the largest cause of deforestation in every Amazon country. Amazonian forests in Brazil houses approximately 200 million head of cattle and is said to be the largest exporter in the world, supplying about one-quarter of the entire global market. This phenomenon has proved controversial due to international concern over increased deforestation in the Amazonian countries.

The Brazilian President, however, has brushed off the claims made by INPE. But Bolsonaro told several news organisations it is the time of the year called the “queimada” or burn when farmers use fire to clear land. He told reporters: “I used to be called Captain Chainsaw. Now I am Nero, setting the Amazon aflame. I am waiting for the next set of numbers, that will not be made up numbers. If they are alarming, I will take notice of them in front of you.” 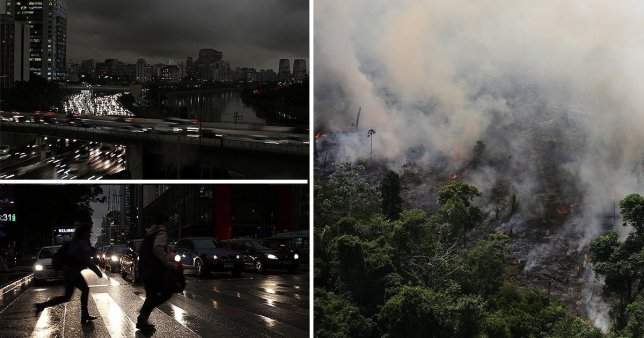 So, what are the areas affected in the fire?
Satellite images obtained by the INPE, have shown fires in the Brazilian states of Amazonas, Rondonia, Para and Mato Grosso. The state of Amazonas is the most affected and fires are still continuing to destroy the area, according to Euronews. The immediate effects of damage to the Amazon go far beyond Brazil and its neighbours. This area's rainforest generates over 20 per cent of the entire world's oxygen and 10 per cent of the world's known biodiversity. The Amazon is commonly referred to as "the lungs of the planet" and plays a vital role in regulating the climate.


How bad is it really?
It is as devastating as the fact as that one can see the smoke from space. The European Union Earth Observation Program's Sentinel satellites captured several images of "significant amounts of smoke" over the Amazonas, Rondonia states and other areas. The skies darkened over San Paulo, Brazil, for an hour on Monday afternoon after the winds carried smoke from about 1,700 miles away. Images shared on social media from the area with black smoke hovering over Sao Paulo were nothing less than catastrophic.

If these images don't make us realise what climate change could mean for us, then we do not know what would. Our world would drastically change if these rainforests were to disappear, impacting everything from farming to even the water we drink.