The 23-year-old Delhiite was touted to be the next-big-thing in the ABVP after rocking the DUSU polls. But how he shot into the limelight and his eventual burn were almost movie-like

Ankiv Baisoya is a name that spelt triumph for the ABVP during the DUSU (Delhi University Students' Union) elections on September 12. With the RSS-affiliated ABVP (Akhil Bharatiya Vidyarthi Parishad) sweeping all the major seats in the 2018 DUSU election and Baisoya elected as President of the Union, the election win was a loud proclamation that the right wing party has worked its charm on their younger karyakarthas and that they are here to stay.

Baisoya, an MA student from DU's Department of Buddhist Studies, shot to power by winning 20,457 votes and was the poster boy for the party. DUbeat, the university's independent publication described him as a diligent party member who has been working with them for about five years. Things were as hunky-dory as they could be, and at least in DU, acche din seemed to be working.

For a party who came close to winning the 2017 elections but ended up losing to the Congress-backed NSUI (National Students' Union of India), the 2018 win over NSUI was a euphoric moment for its cadre across the country. To the extent where, while congratulating the party for its win, Amit Shah, the BJP's all-weather National President tweeted, "This victory is not just a victory of faith in the youth to nationalist ideology, but also a mandate of youth against divisive and opportunistic politics." Strong words that harboured a stronger sentiment.

Baisoya himself was bombastic. Photos of him celebrating vigorously and flashing that toothy smile that eventually everyone saw, were all over social media. The good press was, well, good. Calling his win an opportunity to create new DU, Baisoya took to Twitter to express his excitement, "Thank you all wholeheartedly for showing your trust in me. This victory is not my own win but everyones. Let's create a new DU."

But as he was basking in the glory of his victory, making TV appearances and giving fiery interviews, little did he know that his dreams would be short-lived. On September 18, just six days after the election results, members of the NSUI alleged that Baisoya submitted fake BA certificates to get into DU. To back their claim, the Congress-backed NSUI released a statement from Thiruvalluvar University, the tiny little varsity outside of Vellore from where Baisoya supposedly pursued his BA in Economics. Their contention was that the documents were forged and Baisoya never studied there. Responding to the NSUI inquiry, Thiruvalluvar University's officials issued a statement that said, "The candidate's documents have been verified and (it has been) found that the said certificate is not genuine. It is a fake certificate."

Following this, the NSUI gleefully wrote to DU’s vice-chancellor seeking an inquiry into the matter and urged the authorities to file an FIR. 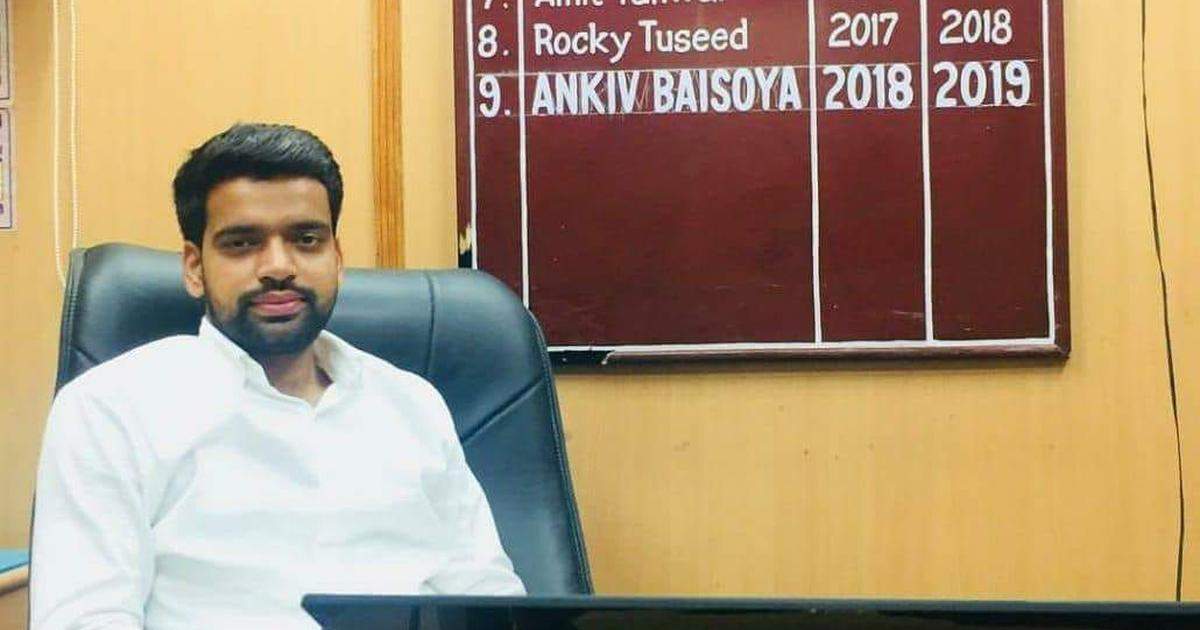 Caught with their knickers down, the ABVP refuted the claim, labelling it as NSUI propaganda and maintained that Baisoya's admission to DU was secured only after proper verification. On September 18, they went as far as to issue a statement to the hungry media, favouring Baisoya, "Delhi University gave admission to Ankiv Baisoya after due verification of its documents. It's the process of DU. Even today, DU has all the rights to verify documents of any student enrolled in the university. But it's not the job of NSUI to provide certificates to any person,” the statement read.

The party, however, changed its stance later and said that it will only take an informed decision after DU confirms the authenticity of the Baisoya's certificate. Meanwhile, Baisoya kept getting himself tied up in knots. In interviews that he gave, he kept contradicting himself. In an interview to Scroll.in, Baisoya said that he had studied 'several subjects' while he was at Thiruvalluvar University but didn't seem to remember what, "I wrote several types of exams, in English and skilled-based subject," he said. Slow clap.

Though he claims to have studied in Vellore from 2013-2014, during this time his Facebook was flooded with photographs of his party activities in Delhi — nothing from Vellore. Not even a glowing selfie from Vellore's famed Golden Temple that should have been on his must-do list, had he lived there. When asked about this he said, "I kept travelling back and forth between Vellore and Delhi. In the middle, I would go for examinations, some classes or if I had some work, but most of the time I was in Delhi only." 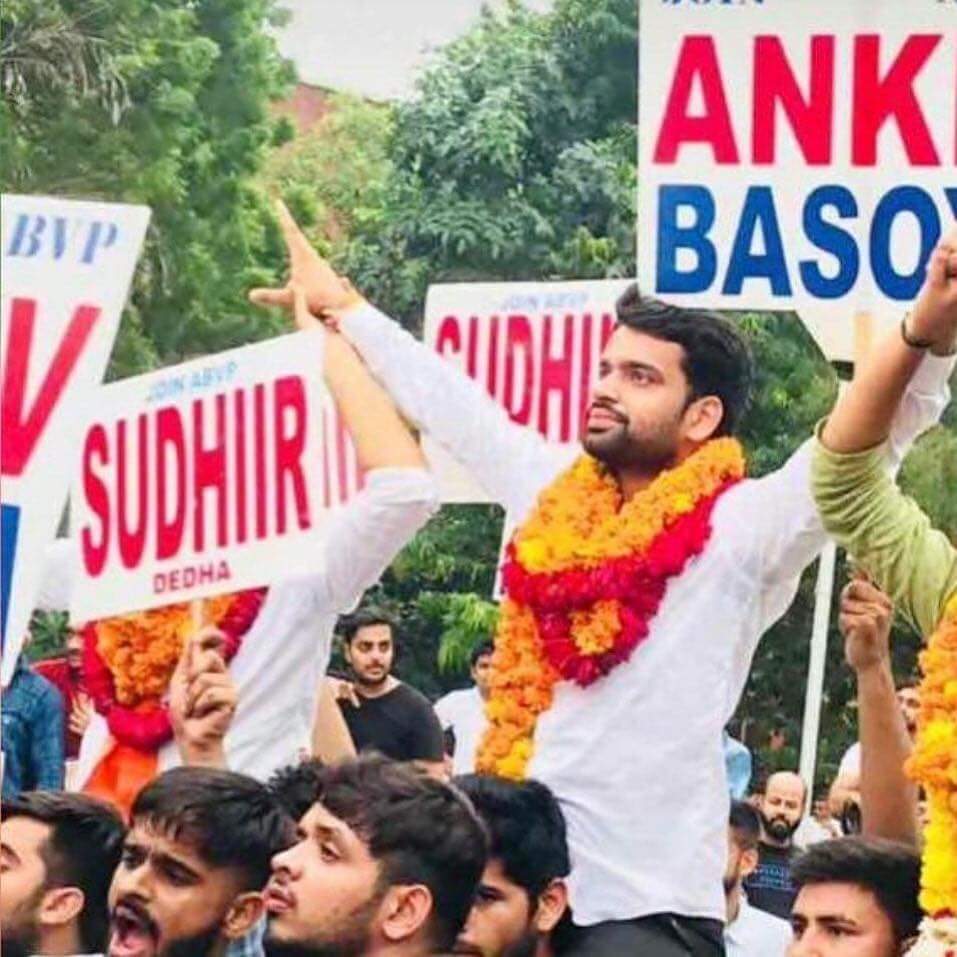 Brewing trouble: As the poster boy for ABVP, hopes were pinned on Ankiv to conquer great heights, but his dreams were short-lived when NSUI came out with evidence of his fake degree just six days after his win

On October 3, bringing the rumours to a halt, the Registrar of Thiruvalluvar University wrote a clarification to the DU administration about Baisoya’s fake degree being, well, fake. “I hereby submit that Mr Ankiv Baisoya had not enrolled in our University or in any of our Constituent or Affiliated Colleges and was not our student at all. The certificate he had produced is fake and not from our University. The Controller of Examinations had issued a letter stating that the certificate is not genuine after verification of records of the office of the same," the Registrar of Thiruvalluvar University stated.

Around this time, Baisoya's hitherto bombastic social media presence began waning, coinciding with his slow but gradual fallout with the party. His Twitter account was active up until October 6, while on Facebook, he uploaded a picture of party activities in Delhi on November 3, after which there was silence. His whereabouts starkly remain in the 'unknown' category — very unusual for a man of his rather Tweety stature.

And then came the death blow. Or the kill shot, if you're a gaming fan. His expulsion from the ABVP, on November 15, due to the pressure from a case filed by NSUI against DU for not taking action against Baisoya. With their backs to the wall and plenty of voices baying for his blood from within, the ABVP sacked their poster boy and relieved him of all organisational responsibilities.

On November 21, a case was filed a case against Baisoya and the now strongly Ex-DUSU President (possibly the shortest in the history of DUSU, DU and Presidencies, in general) was booked on charges of cheating and forgery, and they have started a customary investigation. The case was filed by K T S Sarao, the head of the Buddhist Studies department of DU. Though an arrest has not been made so far, it is certain that all this unfolding of events has created a dent in his political aspirations.

And that is how Ankiv Baisoya became the quintessential 'fall' guy.