Following the arrest of four individuals, of whom two were student unionists, in Bengal, no less than 16 student unions across the country — and from across border like Bangladesh and Philipines has issued a strong statement for their release. According to members of United Students' Democratic Front, Kolkata (USDF), the four wanted to conduct a survey in Jangalmahal to ascertain the condition of the local people in the light of the alleged changing political dynamics of the area. Following which they were arrested. Even though they were arrested on November 12 they were remanded to four more days in police custody on November 23 by a sub-divisional court in Garbeta.

Mustafa Kamal, Arkadeep Goswami, Sabyasachi Goswami, and Sanjib Mazumder, were presented to court only on November 14, two days after their arrest. And this had sparked off a much stronger protest. Charges under IPC section 121 (waging war against the state), 121A (conspiracy to commit offence against the state), 124A (sedition) and 120B (criminal conspiracy) were slapped on them. The defense lawyer, Shubhasis Roy, a senior lawyer of the Calcutta High Court, had appealed for judicial custody of the four. 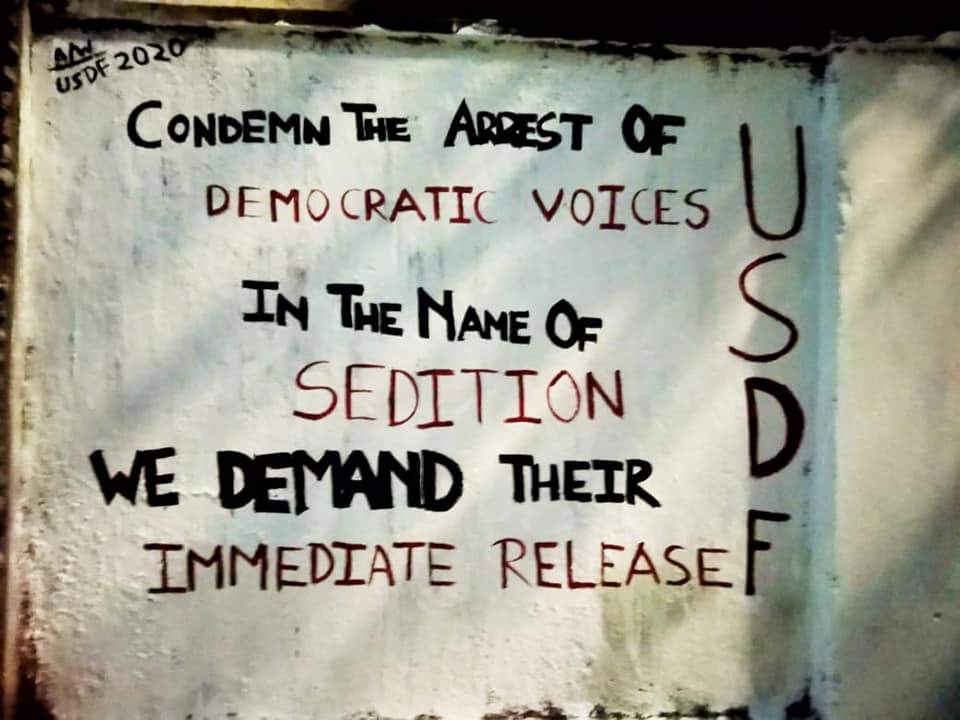 Protesting for justice: USDF members have been claiming that the four individuals arrested did nothing wrong (Pic: Facebook/USDF)

USDF members claimed that the four had done nothing wrong or unconstitutional. "This was an independent survey for them to work on and maybe write articles or papers on this later. The four of them were going from village to village to talk to the locals. On November 12 when they were on their way to a village Goaltore Police intercepted them and took them to the police station," said Subhodeep Ghosh, a member of the Committee for Release of Political Prisoners (CRPP) and a postgraduate student of Comparative Literature at Jadavpur University. 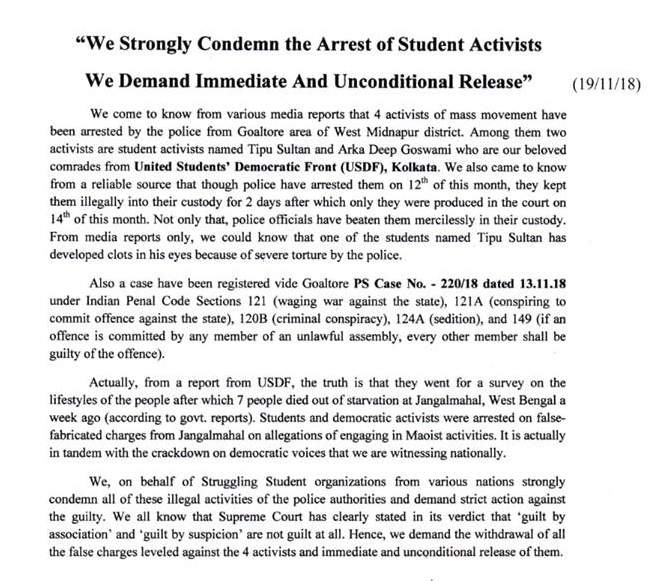 "We got to know about the incident through our friends and other human rights organisations. They held them in custody for 48 hours without producing them in court. This is undemocratic and unconstitutional. They were physically assaulted in those 48 hours. Mustafa has two blood clots in his eyes after the assault," Subhodeep added.

Mustafa Kamal aka Tipu Sultan was born and brought up in Santiniketan and he took up Bachelors in Economics at Viswa Bharti University after his schooling from Patha Bhavan. He quit Economics midway and joined Sanskrit College to pursue his undergraduate in Bengali.

Arkadeep Goswami, a resident of Behala, is an alumnus of Jodhpur Park Boys' School in Kolkata. He took up medicine after school and was admitted to Midnapore Medical College but shifted to Bardhaman Medical College after the second phase of counseling. He is in his fourth year now. Finding links: Mustafa Kamal aka Tipu Sultan was born and brought up in Santiniketan and he took up Bachelors in Economics at Viswa Bharti University (Pic: Facebook/USDF)

The other two were activists working for the people's movement. "Sabyasachi Goswami works for the people's rights movement and is also a poet," added Subhodeep. Sabyasachi, who had been arrested earlier for alleged links with CPI (Maoist), is on bail granted by Calcutta High Court recently. Sanjib Mazumder is the assistant secretary of the CRPP.

Police have claimed that they have seized some leaflets that contain speeches by wanted Maoist leader Akash from the possession of the arrested persons. The leaflets allegedly urge tribals to pick up arms in support of the Maoists, reported India Today. But in its April 2011 judgment, the Supreme Court observed while granting bail to Binayak Sen that “the mere possession of Naxalite literature does not make a person a Naxalite”.