I am not afraid: Why Sunil Ilayidom suspects university 'insiders' helped deface his office for supporting Sabrimala verdict

Ilayidom's office at Sree Sankaracharya University was defaced by unknown attackers. He now believes that it could not have happened on a campus with such good security without inside help

On November 15, unidentified miscreants broke into the Sree Sankaracharya University campus in Kalady and defaced noted orator and writer Sunil P Ilayidom's office. They broke the acclaimed thinker's nameplates and painted saffron 'danger signs' on his office doors. The Associate Professor of Malayalam was allegedly targetted by a Hindutva group for openly speaking in favour of the Supreme Court verdict allowing women to enter the Sabrimala temple.

When asked about tightening of the security around him, he refuses to even file a police complaint and says that the incident wouldn't have happened without the support of insiders, "It is a big campus with tight security. I don't think anybody would have got in without the insiders' support. I am not entirely sure about this but even the police suspect it."

Despite direct confrontation and constant abuse on social media at the hands of radical Hindu outfits, Ialayidom refuses to give in and strongly believes that women's constitutional rights should be upheld in Sabarimala. "I am constantly subjected to online harassment for favouring the SC verdict. What I speak is 100 per cent ethical and constitutional. So, as far as I am concerned, it is backed by an element of truth and therefore I don't have to fear anyone. They are trying to subdue me with their hatred and trying to drag me into controversy with their hate-spewing comments. I strongly stand by what I believe — women should have the freedom to enter the temple," says Ilayidom, who is a strong right-wing critic. 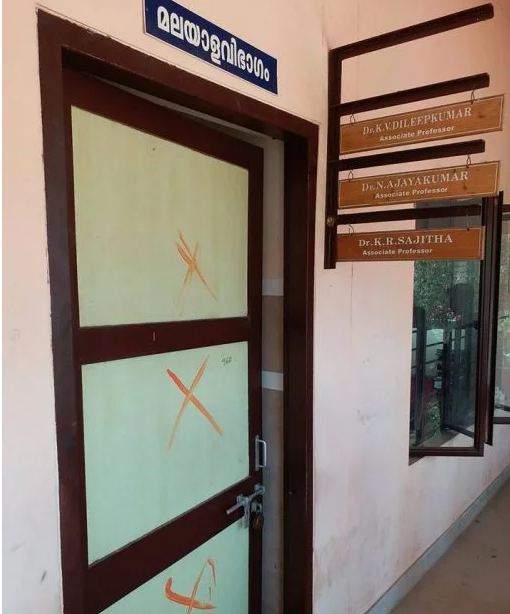 Saffron warning: Ilayidom's office in Sree Sankaracharya University was defaced on November 15. The attackers removed his nameplate and marked danger sign on his door

After the apex court's verdict allowing women between the age of 10-50 years to enter Sabarimala, Kerala has been embroiled in a dispute over the matter, with the ruling-left backing the SC verdict and the BJP holding several mass protests to stop the implementation of the same.

The deep rift between the political parties has left Keralites divided with Hindutva outfits targetting people who support the move. Ilayidom's case isn't an isolated one, Bindu Thankam Kalyani, a Dalit activist and teacher who attempted to enter Sabarimala was forced to retreat and was subjected to severe online abuse. The protesters blocked her school entrance forcing the authorities to transfer her to another school. In yet another case, Swami Sandeepananda Giri's ashram was attacked and his two cars were torched for being supportive of the SC verdict.