I thought I was going to die: JNU student attacked by ABVP recalls mob attack on campus ​

Mohit Pandey, a PhD student in media studies has been in JNU for the last four years and has belonged to the left wing every since.

Three days ago, former JNUSU President, Mohit K Pandey was brutally attacked on campus by alleged ABVP members. He thought he was not going to live through the attack. But he somehow managed to escape, made his way to a police station and registered a complaint. But today, he continues to live in fear because his attackers are allegedly roaming the campus, asking his friends about his whereabouts and threatening to attack him again. He has asked for security but there has been no response from the police.

Students say that there is an "atmosphere of fear" on campus. But what exactly took place that day and how did Mohit end up getting trapped in a car surrounded by a mob that was hurling stones at them? Well, Mohit says there is an "immediate cause" of this attack but there are also causes that have piled up over the last two years. 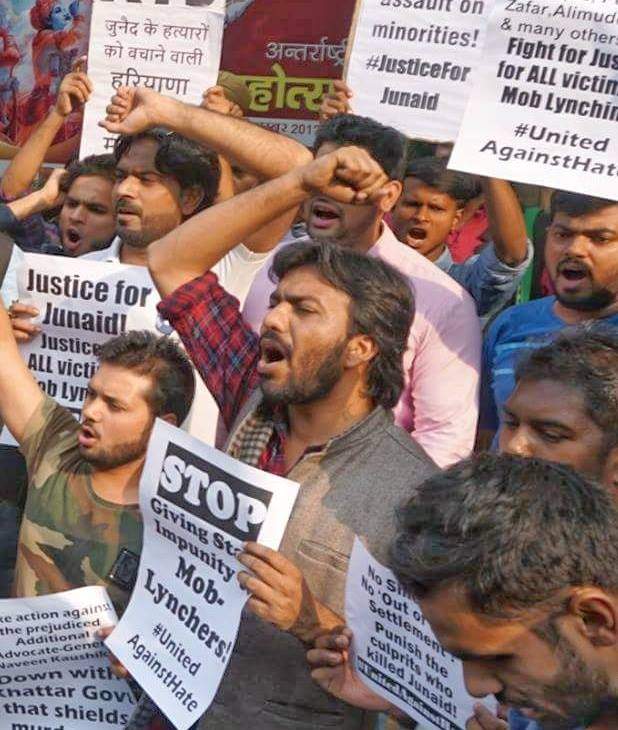 Rising in protest: Mohit Pandey has been one of the prominent faces of protest on campus over the last few years

It all started with Love Jihad

The ABVP was scheduled to organise a movie screening of a film called Love Jihad - a story of three women who get married to men who tell them that they are Hindu. But after marriage, the women realise that the men are Muslims and that it was all a "conspiracy". The ABVP had put up big banners across the campus to promote the screening.

Accusing the ABVP of spreading communal hatred on campus, the left wing students organised a protest ahead of the screening, Mohit was a part of this protest, "I have actually not even been on campus for a while, I had only returned that day and heard about the protest. So I went. Soon the ABVP members started to throw eggs at us. Eventually, we left," he said. After a while, Mohit was returning to his car when a member of the ABVP standing close by allegedly said to him" Chale jao yahaan se" and added that he was "frustrated with Mohit".

Soon after, a mob of 30-40 people started to chase Mohit, he ran into his friend's car for refuge, "A friend had come to visit me and he had offered to drop me to my hostel. So when the ABVP members began to chase me, I ran into the car. But they started throwing huge stones indiscriminately, breaking the windows, climbing on the bonnet and then tried to attack me with the broken glass. Then they started to drag me out of the car. The guards were trying to stop them but they kept pushing the car. I was terrified, I really thought I was going to die, " recalls Mohit.

According to a release by the Bhagat Singh and Ambedkar Student Organisation on campus, the mob screamed, "Aaj Mohit zinda nahi bachega"  (Today Mohit will not survive)and "Isko Najeeb ke paas bejo" (Send him to where Najeeb is).

The video footage of the incident-

No refuge in the teacher's quarters

Mohit decided it was best to go to a professor's flat, so the mob won't follow them there, "But they followed us there and kept asking people if they knew where I was. They said they would beat up the people who were hiding us as well. I called the police but they just didn't turn up," Mohit recalled. The 30-year-old then had to find a back route to get out of the campus and made his way to a police station.

"In the house that I was staying in, there was a small child so the mother pleaded with me to leave because she was scared the mob would hurt her child," he said. When he approached the police and asked them why they hadn't come to help, they said that the "gate had been closed". He has filed a case with the police claiming a threat to his life, but till now no action has been taken.

Guards caught in the crossfire

When asked about the attack, the ABVP members, in turn, blame Mohit for hitting a guard while trying to escape. "I met with the guard and apologised. I even offered help and said if he wants to take action, that is also fine. But what happened there was that the guards were trying to protect me and the ABVP members were the ones who were pushing and shoving them. There are so many videos to prove what I say, but the ABVP has no evidence of their innocence in this matter. I was only scared for my life, so I asked my friend to drive," he explained. 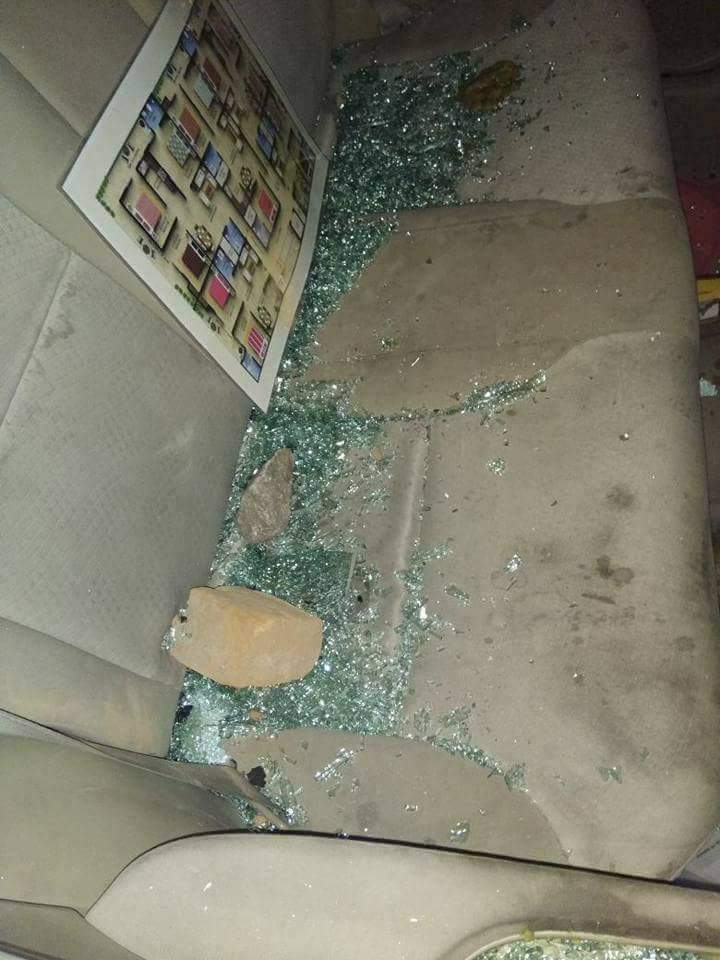 Horrific experience: Mohit, who cannot drive, got into the backseat of the car to seek shelter from those pelting stones at him

Mohit says that four or five of the mob members who attacked him were the same people who had beaten up Najeeb, "The reason why they continue to roam the campus and intimidate me and other left-wing members is that they have impunity. Even after (the outrage over) Najeeb's case, they walked around freely and now after the attack on me they continue to do so. They have no fear of the law," he said.

Nobody has the right to propagate hate propaganda on campus, the PhD student said. "How can you single out someone and attack them this way?" he questioned. "There have been many issues that we have been campaigning against but we've been particularly concentrating on Najeeb's case and refusing to forget it or let go of it. This is why the ABVP is getting so violent against us," he added.

"I come from a family of right-wing supporters but when they saw this happen to me, they were shocked. They also might share the same ideology with them but they couldn't believe that those very people attacked me so brutally just because I have different ideas," Mohit said. 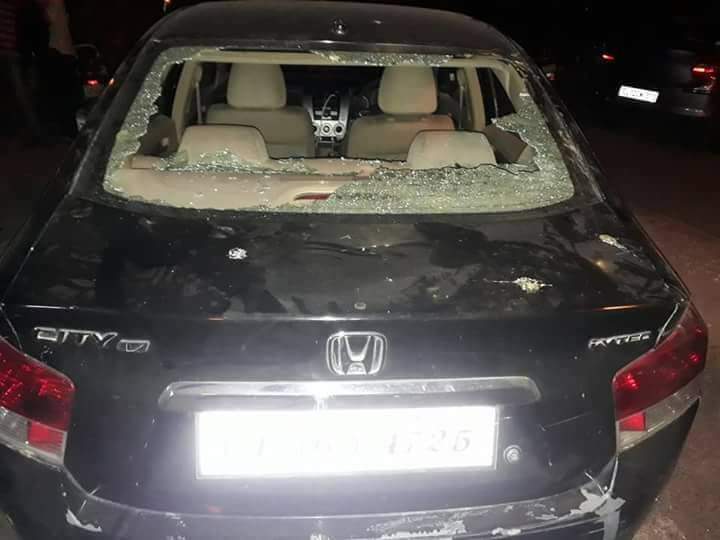 Repeat offense: Mohit's friend had come to visit him on campus and was going to drive him to his hostel when the incident occurred

An atmosphere of fear

Is the fast-approaching election date making the campus more heated? "Yes, it is. The fact that we're mobilising youth to come together against the BJP could be why the ABVP is angry. I have been travelling to different parts of the country to mobilise youth to come together against the BJP. I even worked with Jignesh Mevani on his campaign. Besides this, we've been protesting against the reservation cuts, the gender injustices and other issues in the country. So it's all these things that have been driving the ABVP up the wall," he explained.

In the release by the student group BASO, it is stated that the fact the suspended deans and chairpersons had been reinstated and that action had been taken against Atul Johri could be why the ABVP feels pushed to the edge.

A JNU student in a Facebook post said that the campus is becoming dangerous more and more every day, "The campus of JNU is becoming the safe haven of criminals from ABVP. My comrades are threatened by these goons whenever they are found alone, cornered by eight to ten of them, and told that "their legs will be broken so they can't walk again" and that they will "also be made to disappear". "Like the person from ABVP said before I was attacked. The ABVP is truly frustrated with me and others like me. So they are using violence to shut us up," Mohit said.