The Central Board of Secondary Education has declared a re-test for the board exams of Class X and XII. The decision came after two papers were allegedly leaked on WhatsApp and other social media platforms.

The alleged leaking of paper took place on March 26 when class 10th has its Mathematics exam and 12th standard appeared for the Economics paper.

Earlier, similar rumours had spread about Accountancy paper for the 12th grade — which CBSE had denied.

The board hasn't confirmed the dates but and students are awaiting updates for the same. 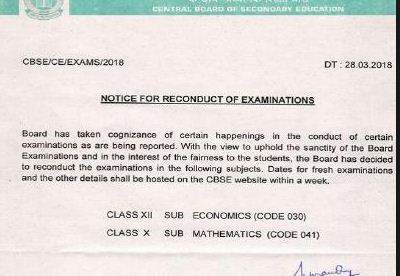 The circular read:  Board has taken cognizance of certain happenings in the conduct of certain examinations as are being reported. With the view to uphold the sanctity of the Board Examinations and in the interest of the fairness to the students, the Board has decided to re-conduct the examinations in the following subjects (Class XII  — Economics and Class X Mathematics). Dates for fresh examinations and other details shall be hosted on the CBSE website within a week