We felt betrayed: JNU researcher recounts how the police assaulted them on ‘Black Friday'

You’ve seen the pictures. You’ve heard the screams. Now, hear a blow-by-blow account of how the Delhi Police dismantled JNU’s March to Parliament

On March 23, the same day Bhagat Singh, Sukhdev and Rajguru were martyred by the British government, 4000 students, teachers and citizens of Delhi, in a disciplined and peaceful manner started the march from JNU at 3:30 pm — All the arrangements had been made for the long march to proceed in a hassle-free manner with complete information about it having been provided to the Delhi Police. The Unions had also shared the route map and all related details regarding the march with the police.

The 1.5 km rope which we had brought to ensure demarcation of space for walking protesters and traffic fell short and didn’t cover the length of the line of students. The media organisations and journalists who were covering the march even appreciated the discipline and coordination of the students  in registering their protest while ensuring a smooth flow of traffic.

Why did JNU students and teachers march to Parliament?

The trigger for this march came from two issues. One, the VC’s obdurate stance to suspend a Professor of the School of Life Sciences who has been accused of repeated sexual harassment by his students and who has 8 FIRs filed against him. Two, the non declaration of the merit list for the second consecutive year for viva for MPhil-PhD admissions.

Jawaharlal Nehru University, India’s premier university for Social Sciences, Humanities, Arts and Sciences has been under attack from the time this government came to power. The nature of attack only increased with the appointment of Mamidala Jagadesh Kumar as Vice Chancellor of JNU, who has been on a mission to shut down JNU and change its nature. For decades, JNU students and teachers have fought various regimes and have ensured quality education remained accessible to the poor and marginalised sections of society.

As the JNU administration closed all avenues of communication and started penalising every  attempt to protest or initiate dialogue, JNU Teachers Association (JNUTA) and JNU Students Union (JNUSU) decided to organise the March to Parliament to demand the removal of the VC for violating the constitution and the JNU Act passed by parliament. 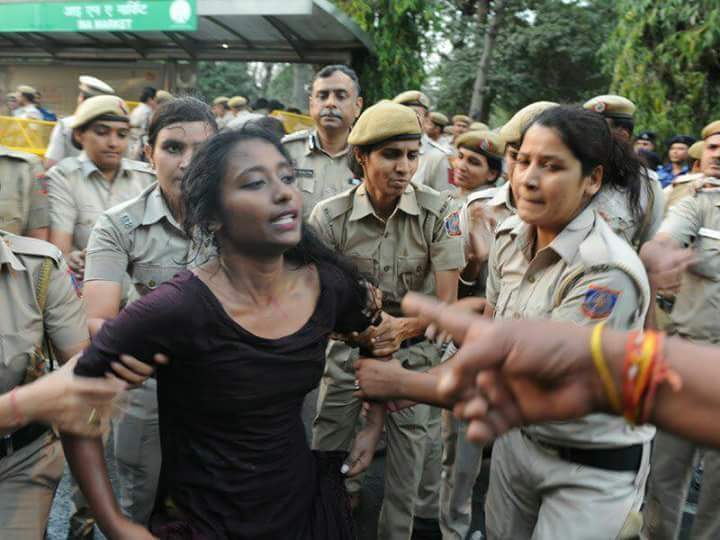 Imagined Riots: Many of the students had to be rushed to the hospital after being injured during the lathi charge

We’re not inconsiderate. We ensured traffic didn’t take a hit

The march repeatedly broke at bus stops in order to ensure that the public had access to Delhi Transport buses. We even waited at red lights and ensured than more than 60-70% of the road was free for vehicular traffic. With the help of teachers, students mobilised a huge number of volunteers who ran up and down to distribute water, biscuits and to take care of any emergencies. The whole path to parliament was resonating with sloganeering of students demanding the “suspension of Atul Johri”, VC hatao JNU Bacchao (Remove VC and Save JNU), Modi Hatao Siksha Bacchao (Remove Modi and save Education) and more.

Being a first-of-its-kind protest march in Delhi by students and teachers, we expected the Delhi Police to cooperate and allow us to go to Parliament and submit our memorandum to Members of Parliament who promised to listen to us.

Then we saw the police and their barricades

However, to our surprise the Delhi Police barricaded the road at INA bus-stop and stopped our well disciplined and peaceful march (which can be corroborated by numerous videos and posts by students and media houses) and were unwilling to heed our repeated requests to peacefully march to Parliament Street. We continued to reason with senior police officials to allow our march as the issue concerns all sections of society — poor, rich and middle class. 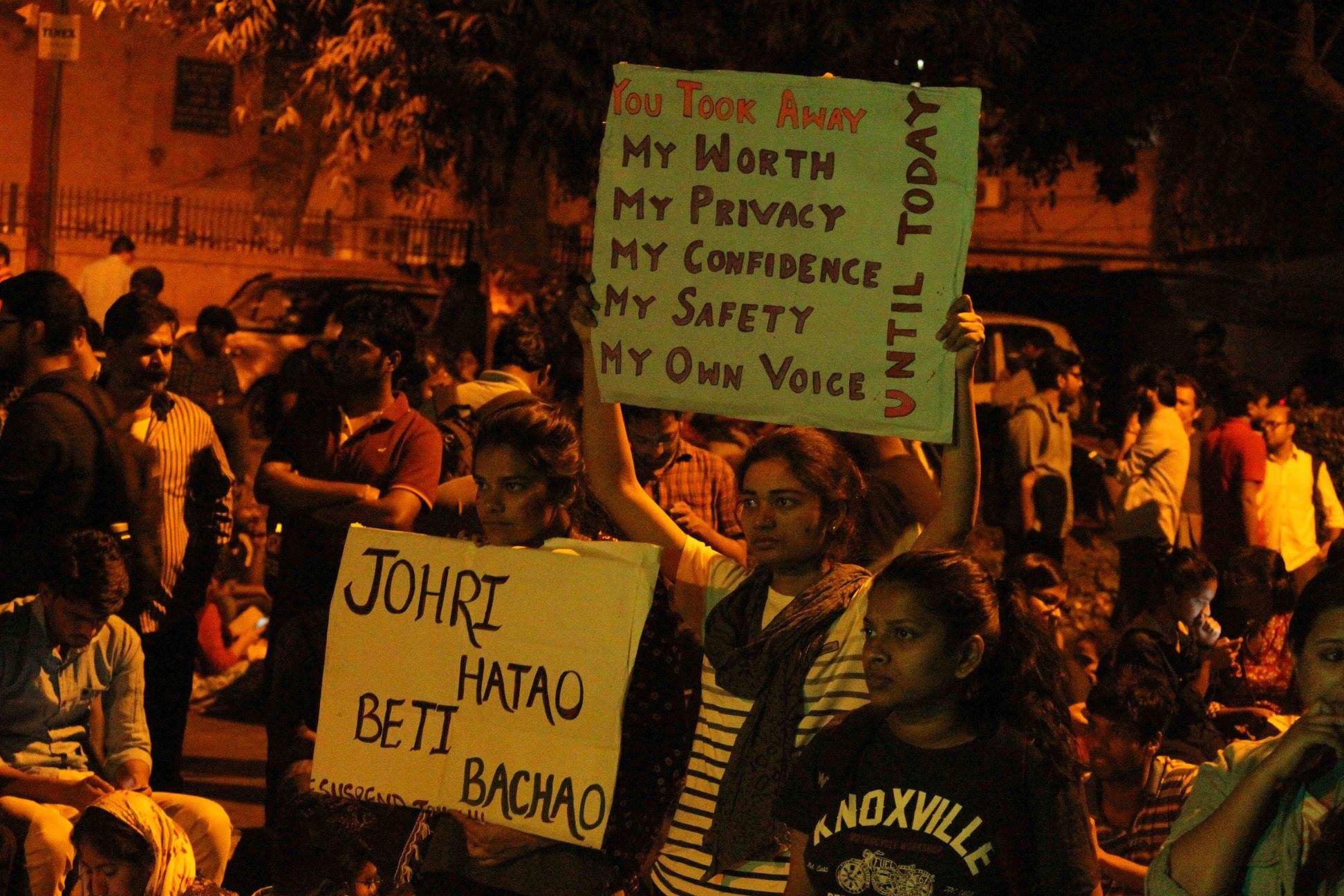 JNU Unites: The police have already filed a case against the students for 'rioting'

The IPS officer immediately went behind the barricades and what ensued next was much more damaging. The place where I and other teachers were waiting to speak to the officer had no crowd as students had only occupied the other lane. To our surprise, the police turned the water cannon on our side too. We felt betrayed by this. We didn’t understand the rationale as we were completely peaceful. That wasn’t even the worst part.

When the water stopped, the real violence and molestation began

What happened next will remain in the dark pages of history. Displaying extreme brutality and a lack of humanity, the police suddenly attacked teachers and students. They mercilessly lathi-charged students who were peacefully sitting and waiting for the march to proceed. Women protesters were chased and dragged by male cops who shamelessly manhandled, groped, tore clothes and molested them. If not for the brave and courageous reporting of some journalists, this barbarity of Delhi Police would not have come to light.

It shows how the police selectively uses the law to target students and teachers who were marching peacefully, while on the other hand allowing Atul Johri, with 8 FIRs for sexually harassment, walk out with on bail in 80 minutes. It took them 5 days to arrest Johri but not even 80 minutes to free him as they felt there was no need to seek his custodial arrest. Unneeded force: The students say that the police had pre-planned the water cannons and barricades

We are the future, so we aren’t backing down

The mayhem unleashed on students and teachers the police was unprecedented. It only reaffirms how the Narendra Modi-led government has been using the law to silence students and all democratic protest. Be it arresting then JNUSU President on fake ‘sedition’ charges based on doctored videos or using the same tactic in Ramjas College incident to target students and teachers who have relentlessly been fighting for the safety of women students, the police has once again proved that they they wish to to divert attention from Atul Johri and create a false narrative in people’s mind.

However, they fail to realise the future of this country is our future. We the students won’t allow this government to go scot free by allowing people like Johri walk free. It becomes important to constantly oppose the moves of the government to privatise, commercialise and corporatise public education in India. Today, the JNU community is being penalised for this fight but let me assure you that we will continue our struggle and fight for a better society and country.