The students are surrounded by a sicky environment and have to share plates and serve themselves during lunch, besides having debris fly around them

Tucked a few kilometres away from the bustling Begumpet is a government school where the students have to sit amidst filth to eat their midday meal. The school has turned into a dump yard for construction debris with no access to toilets or drinking water.

While the school education department denies the allegations of the lack-of-hygiene, over 500 children have to struggle on a daily basis. Unlike many government schools in the city which do not have enough students, Rasoolpura Primary and Higher Secondary School has a strength of 580 students. However, the government does not seem to be worrying about their basic needs.

The school has just 80-odd plates for 580 children, many of whom share them during lunch. It does not even have an Asha worker to serve midday meals, which then force students to serve themselves. The school had even discontinued morning prayers with an increase in the illegal dumping on its premises. 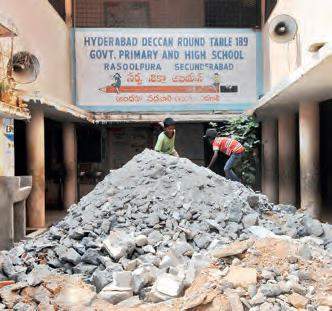 Rubble trouble: The school's playground has been encroached upon by the locals to build a community hall | Sayantan Ghosh/ Express News Service

Children in this school do not even get clean drinking water to quench their thirst and are dependent on borewell water. Moreover, the school does not even have a toilet.

The headmaster of the school, I Sarah Mani, said, "We complained about the issues to Hyderabad district education officer but no action has been taken yet. An NGO has come forward to sponsor funds to construct toilets in the school. We are trying to pay money and get the construction debris dumped in the school removed."

B Venkata Narasamma, Hyderabad District Education Officer (DEO) said, "We have not received any complaints from the school. We will visit the school once and see what their requirements are. The government does not provide plates to students for midday meals and students should get their own plates."

(This article was first published in The New Indian Express)