After UN drops event on Ambedkar's b'day at Indian Govt's behest, Dalit groups turn to US, Canada for support

Deelip Mhaske was set to organise a conference on how AI could reduce the impact of caste discrimination at the UN's General Assembly, until they pulled the plug. Now what will happen?

A month ago, several Indian Ambedkarite forums were thrilled that the UN had agreed to mark Dr B R Ambedkar's 127th birth anniversary with an event that discussed the use of Artificial Intelligence (AI) to combat the issue of caste. Today, that dream lies in tatters. Apparently, at the behest of the Permanent Mission of India, the UN has revoked permission to to hold the event — causing a whole lot of heartache for the Ambedkarite bodies including Maharashtra-born researcher and IIT and Harvard alum, Deelip Mhaske.

Mhaske, the founder of the US based NGO, Foundation for Human Horizon along with International Commission for Dalit Rights, Dr Ambedkar International Centre and Ambedkar Association of North America were to hold an intentional conference on eliminating caste using Artificial Intelligence (AI) in the United Nation's General Assembly Hall. The event, scheduled on Arpril 14, marks the 127th birth anniversary of the Dalit icon, Dr BR Ambedkar and it was to see participation from the tech giants like IBM, Microsoft, Google and Facebook on leveraging AI to eliminate caste in India and elsewhere.

However, on March 23, the Permanent Mission of India has apparently written to the UN to stall the event. Expressing his disappointment, Mhaske has written to the UN Secretary General, Antonio Guetters seeking his support to proceed with the celebrations. In the letter he has claimed that the Indian government is trying to influence the UN to cancel the pre-planned event. In a Facebook post, Mhaske wrote, "Rejecting Dr Ambedkar, Shiv Jayanti and Vaishaki celebration is equal to rejecting the United Nations diversity policies. It is a violation of India as a country as it should be protecting the rights of all citizens."

He also points out to the dichotomy in the government's actions,"India just organised a godly welcome to Sadguru Jaggi Vasudev in the United Nations but rejects icons of modern India." The Philadelphia-based Mhaske went on to add that support had been forthcoming form other quarters, "Good news is that many other countries missions' have come forward to support us. Global advocates for social justice and equality from USA, UAE, UK, Canada, Australia have already written to their respective governments to come forward in support."

Mhaske's story is one of great grit and courage. Growing up, his mother often had to resort to rag-picking for sustenance and there were times when he worked as a construction labourer to support his education during his time in IIT.  But right from his childhood, if there was anything that helped him overshadow the poverty that surrounded him, it was his academic excellence. Immediately after graduation, luck favoured him when his research paper caught the attention of the University of Pennsylvania, following which he was offered a scholarship to pursue his PhD. Soon after, he received his Master's degree in Health Science from Harvard Business School.

Excerpts from the interview: 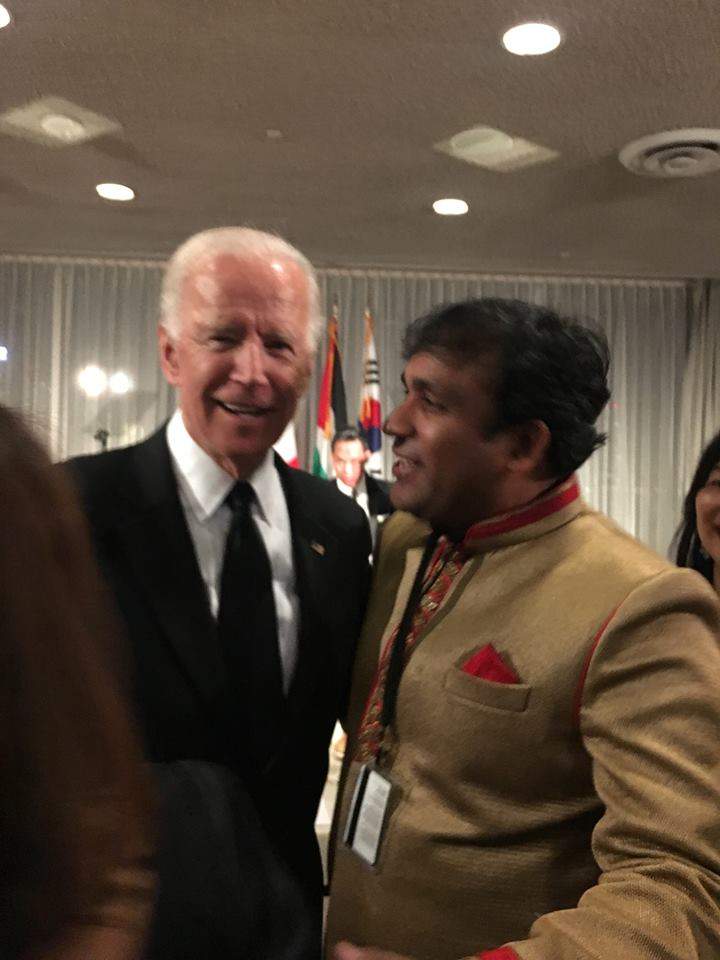 No ordinary Joe: Deelip with Joe Biden, the former Vice President of the United States at the UN headquarters in New York

By 2030, what change do you think AI would bring about for the Dalits in India?

AI will make India independent for the second time, not just the Dalits, because every thing that is public will have transparent transactions, crime will be reduced, corruption will be nil and every individual and family income and properties will be on public platforms. If Dalits adopt modern technology, they will be the world's second largest force after China. In India, we need to use the empowerment approach and not a political approach to address issues of caste. We should compare the gender equality movement to caste movement and then we will have better solutions. Again, no country exists without social discrimination. But elsewhere, such discrimination doesn't affect an individual's quality of life and the fundamental human right of leading a life with dignity and equal opportunity. Caste is a man-made concept and can be eliminated easily. Modern India is already taking steps to eliminate caste and the next decade will be ruled by generous people who understand the meaning of community.

How will data be compiled and how can AI map Dalits in remote corners of the country?

Geographic Information System (GIS) mapping and all census data is connected to the platform, including all criminal data.That predicates the areas of high interest for policy making and a technological app will connect people to government law and other machinery. This will not just be used by the government, but can also be used by any socially responsible person. Bigger Laurels: He has been nominated by the WHO for Jonathan Mann Award. The award is bestowed annually to a leading practitioner in health and human rights

This would require all the stakeholders to invest heavily in technology for its effective implementation. Why not invest the money directly for the upliftment of Dalits?

This is not about Dalits alone — this is about India as a collective community. In India, caste issues affect every Indian, it's just the intensity that is different. If caste issues are eliminated, we can triple our economy in just one year. If Dalits form a separate nation that will be the third largest nation in the world, but last in GDP. We would only have one doctor for a population of one crore. 80% women would have no source of income and would be victims of sexual exploitation. This nation will have 45% malnourished children. These shocking facts are not addressed because the population is counted as part of India.

The Modi government is pushing for a digital economy and is promoting 'Make in India' aggressively. Are you hoping for their support in this project as well?

Whatever technology you use, if it has no inclusive approach for caste. It will turn out to be caste biased and wouldn't bring in the desired change. The government's work on spreading technology is welcome, but they have to be inclusive and have to tread the path of social equality for effective implementation.

How did you start working for caste-based issues?

In 1995 while working towards my law degree in Government Law College, Mumbai, we started helping under-trial students from Arthur Road Jail, and that's how the idea for my organisation came about. Later, in the same year we were in the Damungar slum in Kandivali (which was demolished later by the government), where we set up health and education centres for school drop outs among slum children. Then we expanded the work to other slums and in 2005, we registered it in USA and UK.