48 hrs later, CTC breaks silence, says they have passes to prove they got legal forest permit ​

After 48 hours of the Theni Fire that killed 10 members of their ill-fated trekking party, the Chennai Trekking Club finally issued a statement on Facebook and the post details the events of the fateful day. The post stated that the group started off at the base from Kurangani on Saturday, March 10 and they paid fees at the forest entry check-post where they were issued an entry pass to the group. This comes in the wake of several allegations that CTC had bribed forest department officials to get their trekkers into the forest.

The post goes on to say that there was no sign of a fire in the entire forest on Saturday, "As a normal seasonal cultivation practice, local farmers at the base burn grass during this season and on Sunday it seems they light the grass at the base. Due to an unusual low depression in the Bodi Valley there were unexpected and unprecedented strong winds on Sunday. As a result, the fire swept across from the base of the hills and spread across the hill upwards," the post read. 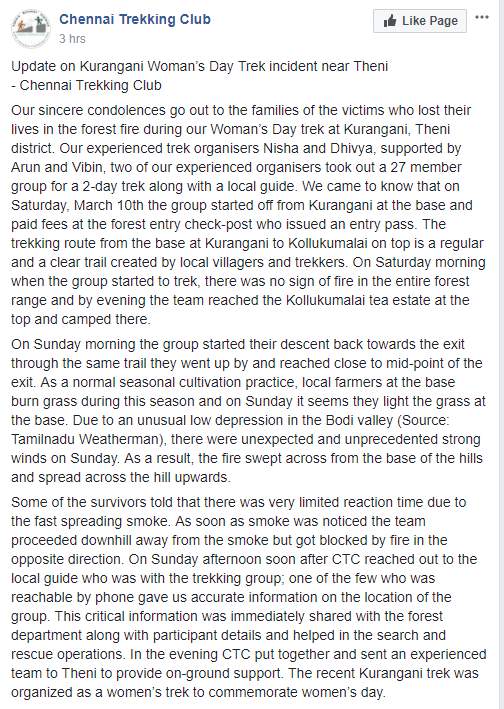 Details here: The screenshot of the Chennai Trekking Club's post in the aftermath of the Theni incident

According to the Club, there was very limited reaction time for the trekkers who started to proceed downhill when they noticed the fire but got blocked by fire coming in the opposite direction. The group stated that some of those who led the group gave up their lives trying to save others.

In a separate post, another member of the Club, Jotsna Iyer also claimed that permission was taken for this hike and added that this had been confirmed by the Theni police. There have also been questions as to the whereabouts of the founder, Peter Van Geit - who many claim has been in hiding ever since the tragedy. Iyer said that his house in Palavakkam was put on sale last year and he is therefore not available at the address. "By past records and current weather, this fire is an anomaly. It is easy now to include March in the list of months not favorable for trekking but not everyone can understand the defensive power of plantations that are, if not illegally, very unadvisedly creeping up the mountain into forest lands where animals can get to them. The real motive behind why that fire was started- if it is not to protect the heavily sprayed mango, cotton and lemon" she added. She also pointed out in her post that the leaders in these treks are all experienced, level-headed and have a good knowledge of navigation.