Staff members have alleged that despite bringing this to the notice of the concerned authorities, nothing has been done as they are busy organising day and night cricket tournaments

Students of Government Urdu School No 5 in Belagavi are having to hold their bladders or run to relieve themselves in a dangerous gutter located about 200 metres away, beside a railway track at New Gandhi Nagar here. The schools lack basic facilities like toilets, drinking water and is in a dearth of classrooms since heavy rains forced a portion of its building to collapse two years ago. The madrassa next door has offered its community hall to the school, which is where it currently conducts classes.

According to staff members, the building collapse led to some major damages. The collapse led to a shortage of classrooms and toilets with one portion of the toilets damaged. This school has a total of 595 students and among them, 399 are girls. Students, especially girls, continued to utilise the damaged toilets until it was demolished 15 days ago. The staff said that senior girls went home during lunch break and used the toilets there before returning to school. They added that most of the students reside close to the school. 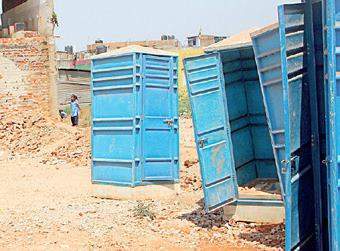 Toilet-less: Students alleged that a few temporary mobile toilets had been brought for their use but the toilets were never set up

The students allege that despite a few they have been urinating in an open gutter near a railway track since the building collapsed. The huge uncovered deep gutter which the students sue as a toilet poses its own threats and could be dangerous should a student fall in.

One of the school staffers, on condition of anonymity, said "Our misery cannot be explained in words. Students are forced to relieve themselves in the open. But the situation of older school girls and lady teachers, especially during menstruation is worse."

The school does not have a compound wall, due to which several students jump over the gutter and cross the railway track to reach their homes, which is again dangerous. These issues have been persisting for a long time but have not been investigated by the concerned authorities despite being brought to light several times, alleged a few parents. They said that they had met a few authorities and even local public representatives. "The corporators are busy with the arrangements of day and night cricket tournaments being organised by Belagavi North MLA Feroz Sait and so they do not have time to hear our grievances," they alleged.

Basavaraj Nalapawad, Block Education Officer, Belagavi City said "I will check into the issue and will immediately close the route from where students walk to the railway track which can prove dangerous. An estimate of the building project will be made and the construction work will commence immediately."

With only 19 classrooms currently available following the structure-collapse, Mohammad Isaq Mulla, Chairman, School Development and Monitoring Committee said: "We met MLA Sait on Monday morning who has assured us to commence the construction work of the building within two days".