After decades of fighting for justice, campaigns like Amnesty International's BRAVE campaign are helping Manipur's young fight the good fight in a world besotted with Twitter and Instagram

Mohammed Faziruddin, a farmer in Manipur, was shot dead in 2010, in what the security forces called a gunfight. They claimed Faziruddin was a militant. His wife, Salima Memcha, however claims that her husband's death was one of the many extrajudicial executions conducted by the armed forces, under the heavily contested Armed Forces Special Powers Act (AFSPA). Renu Takhellambam too lost her husband to these alleged extrajudicial killings. On April 6, 2007, her husband who then worked with an NGO, was shot dead along with two others in broad daylight. "He was shot in front of the whole neighbourhood, with the support from the police," Renu says.

The lives of both Salima and Renu have turned around since. Salima (38), is a mother of two and has been the sole breadwinner of the family since 2010, while also fighting for fair investigations to be held in her husband's death. Renu too has been actively fighting to support the widows of these extrajudicial killings. But they aren't the only ones - there are scores of families, especially women, who allege that the paramilitary forces have constantly abused powers and have been responsible for the 'murders' of their loved ones. Together, Renu, Salima and many like them began the Execution Victim Families Association Manipur (EEVFAM) in 2009.

More recently, several youngsters have started supporting the collective, in their effort to stand up against the alleged abuse of the paramilitary and security forces under the AFSPA in Manipur. "Youth have always been at the forefront of activism and human rights," Monika Khangembam, a young Manipuri activist herself, tells me. "This is what makes our fight stronger, I think," she adds.

A writ petition filed in 2012 by the members of EEVFAM pushed the Supreme Court (SC) to give a landmark ruling in 2017- a demand for a probe by the CBI into 90 cases of extrajudicial executions in Manipur (of the 1,528 documented). The BRAVE campaign by Amnesty International, decided to support these activists who have fought for justice by enabling them to bring out their stories to larger groups of people across Manipur. The campaign’s main objective? To work along with key members of EEVFAM, allowing them to reach out to the masses of Manipur.

Here is a brief look into the intimidation which the activists have faced, their demands, and the role of the BRAVE campaign in supporting these human rights defenders. 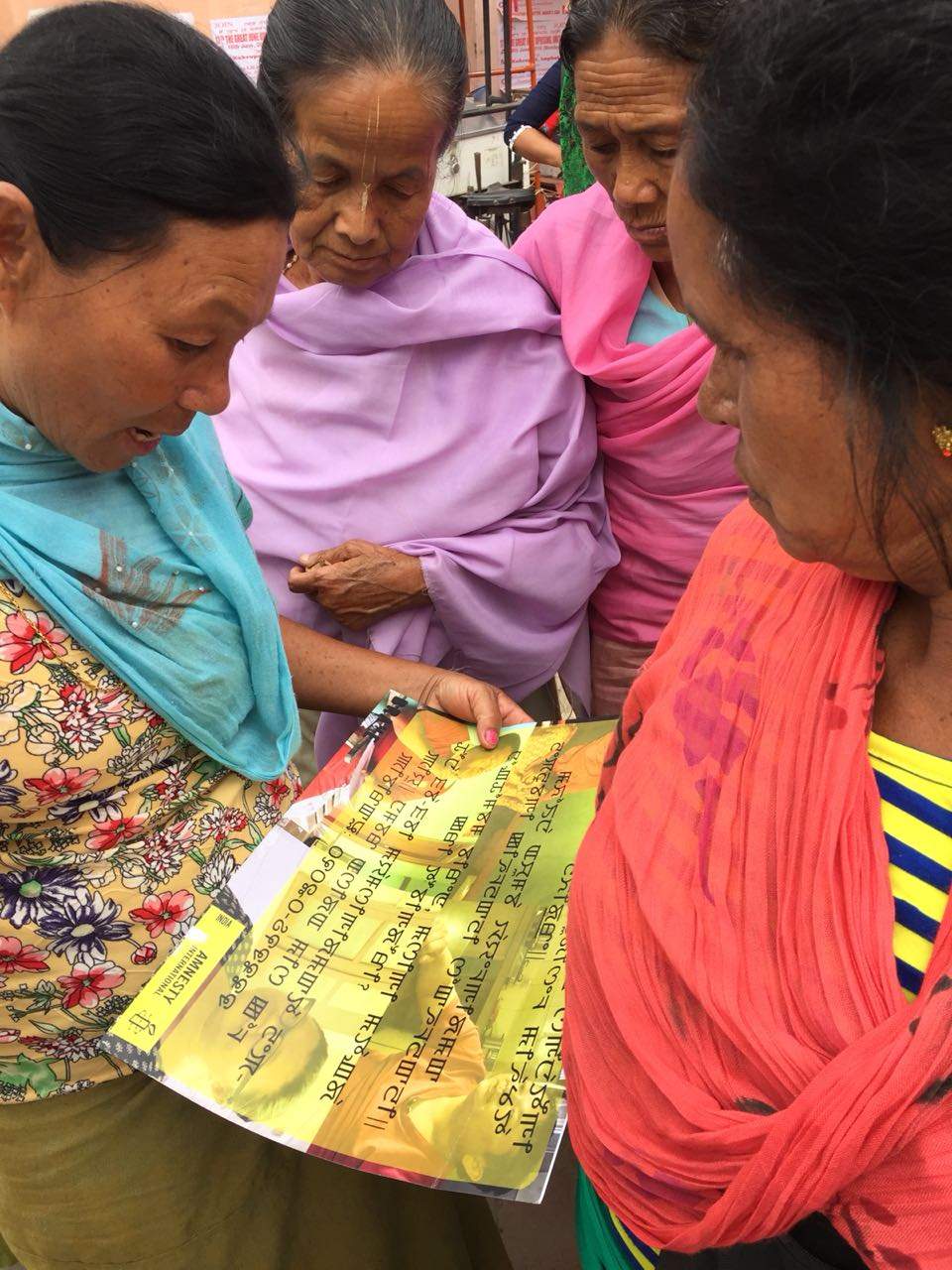 What is the issue in Manipur and what do the activists want?

Essentially an extension of a British-era act, the AFSPA gives the armed forces extraordinary powers in regions which are declared as “disturbed” – they bear legal immunity, can arrest without a warrant, can search spaces, including homes, at any given time of the day, without warrants, and can even shoot to kill. AFSPA was set in action in Manipur beginning 1958, as a result of an internal boycott, which eventually led to an insurgency by four different groups at the time. The current reasoning behind AFSPA’s continuation in the state is twofold – one, to combat terrorist outfits from Myanmar who can easily enter the country, given its shared borders with Manipur and two, to prevent separatists from disturbing the governance of the State.

Since the verdict last year, EEVFAM activists – especially four of them – claim to have faced severe harassment from state armed forces. Salima Memcha, Sagolsem Menjor Singh, Ranjeeta Sadokpam and Okram Nutankumar are the activists of the organisation, who have faced “very intimidating situations with the forces,” Likhita Banerji, Researcher for the BRAVE campaign says.

Salima, a key member of EEVFAM, was due to give a statement against her husband’s killing to the CID. At 5.30 am on April 7, the paramilitary and state forces vandalised Salima’s house, and threatened her, warning her that "they had a keen eye" on her. In another case, police personnel visited Sagolsem Menjor's house when he wasn't around. They threatened to arrest him, but failed to produce a warrant, he says. Later a public official confirmed that there was no warrant against him - and apparently it was not the first time that Menjor had been intimidated this way. Citing yet another case, Likhita tells me of Okram Nutankumar, whose window was shot at. "It could have hit anybody sitting in the room," she says.

Renu Takhellambam, also weighs in, "I have myself not faced an intimidation as vicious as the others, but each one of us who is a vocal part of the collective has certainly been harassed in some way or the other by the forces." Citing instances of bribery by the armed forces, to ensure that the cases by the activists are withdrawn, Renu tells me, “Salima was even offered a decent education for her kids, in return for not pushing through with the investigation of her husband’s killing." “And the BRAVE campaign which is a collaboration with EEVFAM and Human Rights Alert, wants these rights defenders to have the basic right to be able to seek the kind of justice, without fearing for their own lives,” explains Arijit Sen, Researcher and Programme Manager of the BRAVE campaign, spearheaded by Amnesty International.


What is the BRAVE Campaign?

BRAVE is a global campaign created by Amnesty International to rise against the many ways human rights activists around the world are targeted. The priority is to raise awareness around the issues these activists often face. In India, Amnesty has actively participated in gathering support for the activists of the Bhim Army in UP and EEVFAM in Manipur.

Between June 11 and June 17, Amnesty International India, along with EEVFAM members and Human Rights Alert, carried around the stories of four key activists of EEVFAM - who were being rather violently targeted – to the masses of Manipur, as a part of the BRAVE campaign. The idea being, that more people who know of the alleged attacks of the paramilitary and the state police, the more liable the Manipuri government will be to take immediate action against the perpetrators, while allowing the smooth investigations into the 90 cases which the SC has demanded a probe into. “We want people to understand the stories of these defenders of human rights,” says Arijit Sen speaking of the campaign. “Violence in Manipur has been so routinised, that people almost learn to live with it,” he adds. Arijit, just like the activists themselves, believes that it is important to mobilise people and get them to stand together and demand for the protection of these human rights defenders.

The target of the campaign? Get the CM of Manipur, N Biren Singh, and the Home Minister of India, Rajnath Singh, to publicly declare that the harassment of these activists will be stopped immediately, and to ensure that the alleged intimidation which has already taken place, will be further investigated in an impartial manner.

Was the BRAVE campaign bold enough?

The BRAVE campaign was conducted in four districts of Manipur. “The campaign set off with meet ups and talking to large groups at busy spaces to ensure as many people were aware of the stories of these four activists and their fights,” both Renu and  Arijit tell me. Rallies were also a big part of the week-long campaign. “Our biggest moment was the torch march by the Meira Paibis – literally meaning the women torch bearers – which added on to our cause and campaign," Renu adds in. Additionally, the campaign included a human chain formation on June 16, and a public discussion on the different facets of the alleged extrajudicial killings on June 17. Imphal Talkies, the popular band in Manipur, even made a soundtrack for the campaign, helping them reach out to a lot more people, I am told.

And the role of the youth in supporting the activists' fight and through the campaign? The opinions seem to be divided. Arijit and Likhita believe that the youth of Manipur have resisted violence together for the longest time. "I'd say that the youth and women have always been the major forces who have come together to raise their voices in Manipur. Earlier, be it against the territorial issues or the Manorama gang rape, the youth have played an important role to throw light on the situations," she says. "Even in the campaign, the youth and the women were the ones who came in in larger numbers to attend our discussions," she adds. 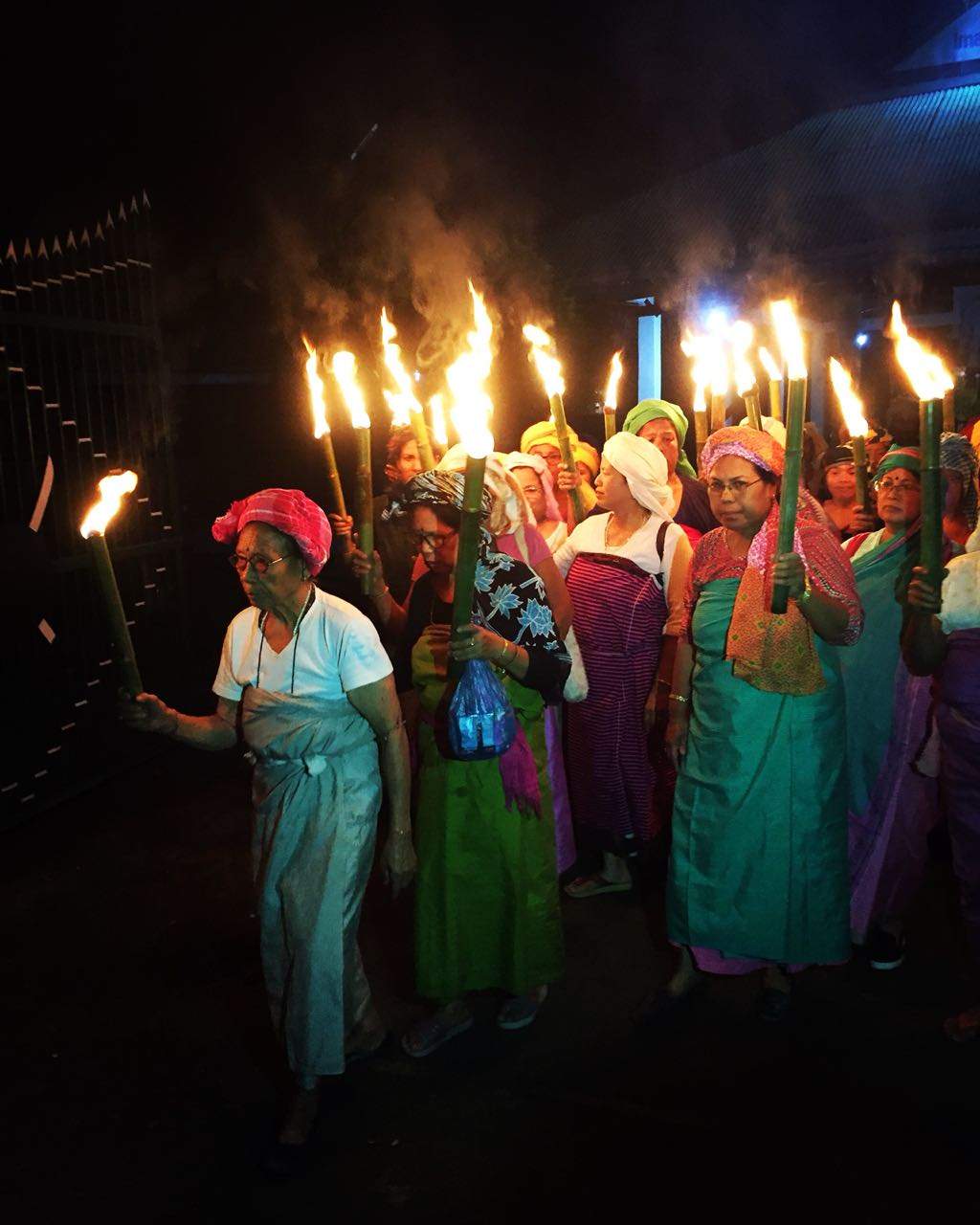 Renu, however, believes otherwise. “Some youth groups and college students do fight along with us, but the numbers are low,” she says. Could this be a result of the possible three-decade long violence the state has generally seen? “Maybe,” she says tentatively, “the point is that their active participation is little, in comparison. EEVFAM is mostly filled with activists and family members who are by now over 30 and there is a large scope for more youngsters to join us in our fight,” she lets me know.

Nevertheless, both Renu and Arijit agree on one thing – the campaign’s outcome has been positive. Not in any hurry to announce the success of the campaign, Arijit does think that the presence of so many people over the week showed positivity. “Despite the heavy rains, people came in from different places to visit our talks and discussions. That is definitely a good sign. Amnesty’s association with Manipur is long and old. Be it Operation Bluebird, AFSPA or our work on Irom Sharmila’s struggle,” he says.

They still have a long fight to fight, she says in finality.