With such DISGUSTING hostels, no wonder Calcutta Medical College students were on hunger strike for 2 weeks ​​

After 13 days of relentless hunger strike, Calcutta Medical College administration has finally agreed to their students' demand for better hostel facilities. The administration had tried to get the students to call off their strike several times in the last two weeks but they flat out refused and now they've finally got their way. But a look at the hostels and the stories that the students tell are enough to prove why the students did not budge from their protest. Dire state: Lack of space for the students was one of the major problems

Even though the students protested only recently, they say that the hostel conditions have been the same for the last many many years and every other batch just made their peace with the circumstances. From extremely unhygienic toilets and a shortage of rooms to broken furniture to rusted equipment, the students have been putting up with dreadful hostel conditions. The false ceiling in the hostel had also given away recently, putting students at risk of injury. The students only began to protest when the authorities opened a new 11-storey hostel building but allocated it completely for freshers. Unsightly: The toilets were especially old and extremely unhygienic

"There are two hostels that are in particularly bad condition and for very long the students have been complaining about the facilities. The authorities kept saying they would look into it but nothing ever happened. So when the new building came up many of the students expected to be given rooms in the new building but when they realised they won't be given the room, they started to protest," one of the students said. The administration had told the students that they were allotting a separate hostel for the freshers to avoid incidents of ragging but the students did not buy the logic because three of the floors were assigned to PG women students,

Several senior students felt that they deserved the rooms because they had to put up with such terrible conditions, "The protesting students wanted the college to conduct a transparent hostel counseling session so that a fair system is in place," the student added. 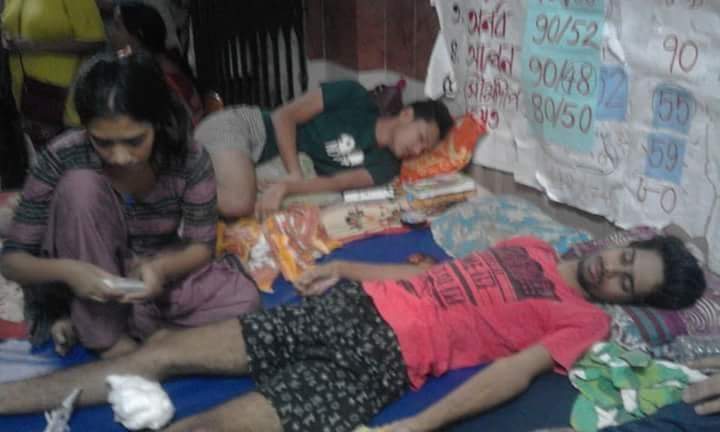 Never giving up: The students protested relentlessly for days

Things became heated when the students staged a dharna and the principal was stuck in his office for over three hours. The principal allegedly called the police on the crowd causing the students to get more aggressive with their protests. The parents of the students also came to the campus to demand that the administration make arrangements for better students, giving preferences to students who hail from very far off places too.

In the last 13 days, several students were taken to the hospital and the health of many students took a big hit. A lot of the students who weren't involved in the protests were also severely affected by the protests because their classes and lives were disrupted, "Some teachers were also harassed by outsiders who infiltrated the protest. Even though classes were going on, many students were afraid to come out because they felt things might get violent," one of the MBBS students said. But now they have reason to rejoice as the administration has accepted all the demands made by the students.