Congress President Rahul Gandhi congratulated Asharam Choudhary, the son of a ragpicker in Madhya Pradesh, who cracked the AIIMS MBBS entrance test in his first attempt and hoped that he would contribute to nation-building and inspire many in future.

"I congratulate you on clearing the All India Institute of Medical Sciences (AIIMS) entrance test in your first attempt and getting selected at Jodhpur AIIMS to pursue Bachelor of Medicine, Bachelor of Surgery (MBBS)... I extend my best wishes to you and hope you will contribute to nation-building," Gandhi said in the letter.

"I am aware that despite all challenges you were able to secure good rank. It is a testament to their dedication and your hard work that you have performed so well," he said, adding it gave him immense pleasure to note how Asharam's village doctor and parents inspired him in his journey and Dakshana Foundation supported him financially.

Choudhary also cleared the National Eligibility-cum-Entrance Test (NEET), conducted on May 6, bagging the 803rd rank in the OBC category and 2,763 overall. 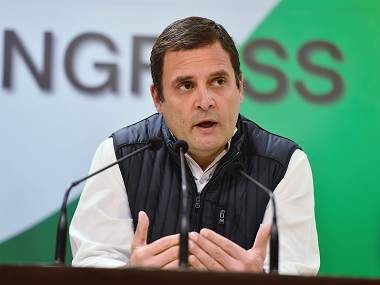 I am aware that despite all challenges you were able to secure good rank. It is a testament to their dedication and your hard work that you have performed so well

In his letter, the Congress President said, "I hope one day, you will also be in a position to inspire other children to take up medical profession and serve the people of India. You remind me of Mahatma Gandhi who used to say: 'Strength does not come from physical capacity. It comes from the indomitable will'."

In another letter to Chief Election Commissioner O P Rawat, Gandhi said, "I write this letter to commend you on the excellent initiative of the Election Commission in Karnataka. The issuance of the Braille EPIC cards to the visually impaired voters is a step in the right direction, which will make elections and voting accessible to all voters."