Seven-year-old son of house help returns lost wallet, gets himself a meeting with Rajinikanth

Yasin, son of a house help and street vendor, found a wallet with Rs 50,000 in it, and returned it to his headmaster. The superstar, in appreciation, has now promised to sponsor his future education

Abi Begum is a woman of identity - she works, ensures that there is food on the plates of her husband and kids every night, and puts her two sons through school.
Everyday, she goes to her neighbouring houses to work as a house help. In her free time, she stitches old clothes for people, for a small pay. Begum introduces herself with the name she had adopted, after her marriage - "No one knows my old name now," she tells me. Her husband, G Basha, sells baniyans and other men's delicates, on the busy market streets of Erode.

But their seven-year-old son, has just taken them to meet Rajinikanth - on the super star's invite, at that!

Yasin, Begum's second son who studies at the Panchayat Union Primary School near Chinna Semur  - "an elementary school," she tells me proudly - has just done a remarkable thing, for a class II student. On the grounds of his school a few days back, he found a wallet full of hundred and five-hundred rupee notes, which he promptly handed over to his headmaster. Upon counting, the headmaster had found a sum of Rs 50,000 in the wallet, which was readily returned, along with Yasin, to the SP in charge, Sakthi G.

"The SP was very shocked that Yasin had given away the wallet, without taking a single rupee," Yasin's mother says. And obviously so - the little boy had given away money, five times over his family's possible monthly income, without once budging from his stance. "He cajoled him to take some money for the deed, at least buy him some food or clothes, but Yasin refused," I am told. Yasin's response to the SP? His mother had taught him not to take a single rupee which wasn't his own.

In awe of the parents who had brought this little child up, enough for him to build his moral compass right at his young age, the authority went to meet Begum and Basheer. "He came over, bought him shoes and clothes, and said that there will be a felicitation to celebrate his good work," his mother says. The local newspapers were quick to get the news and giving Yasin his well-deserved time as a local hero, who had set an example for those around.

The next day, they got a call from Rajinikanth. 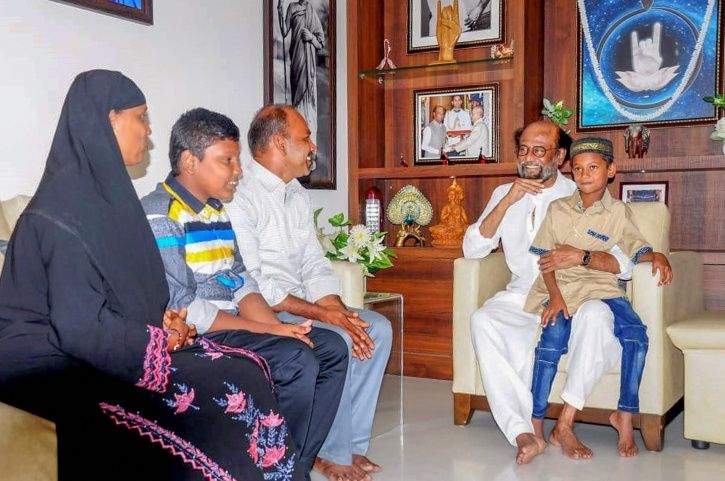 The family met the superstar in Chennai (PTI)

Yasin, like most Tamilians at heart, is a fan of the superstar who can fight all evils, even if he is the villain of the story. It is in the fabric of Tamil making to hold a soft spot for Rajini, love him or hate him. But unlike most of us, young Yasin didn't want a selfie or an autograph from Rajini. "When the reporters asked him what he would like from Rajini 'uncle', Yasin said he would like the superstars blessings alone," the mother tells me, with pride now visibly welling up in her voice. "Meeting Rajinikanth was surreal," she continues. "We weren't ready for this, to be honest. We were very proud of our son, yes, but Rajinikanth recognising him and calling us over, was beyond our imagination," she adds.

As they met the superstar, Begum distinctly remembers being quite in awe of the actor himself. Meeting Yasin and his parents at his Poes Garden residence in Chennai, the star apparently spent quite a bit of time thanking the parents for raising a son of conscience. Talking to the media present, Rajini also showed his appreciation for young Yasin, who at a day and age of theft and crime, was becoming an example of strong conviction and good morals. "He told us that he was going to be there to support our child. He has asked Yasin to continue in the government school till class XII, and post that, whatever the child wants to study, he will support him financially," his mother tells me.

Thanks to Yasin and his conscience, and the school headmaster's quick action to reach out to the authorities, the SP also gifted uniforms to the children of the school.

Yasin's parents, Abi Begum especially, will now have an added feather to their identities - of proud parents, who are raising their sons as good people, first.