Abhimanyu was stabbed to death on campus by members of a rival political party. His friends recall his charming personality and his unwavering faith in the SFI

If not holding protests and shouting slogans, Abhimanyu could be heard crooning old Malayalam melodies along the corridors of Maharaja’s College in Ernakulam. That's the memory that most of Abhimanyu's closest friends carry of the slain student. The 20-year-old leader was stabbed to death on campus during a clash between Students Federation of India (SFI) and Campus Front of India, the student wing of People's Front of India.

Hailing from a remote village in Idukki, Abhimanyu's friends recall that he grew up under very difficult circumstances, "His parents are farmers and they've struggled all their lives. The village they lived in didn't even have basic facilities like electricity or water access. They don't have any direct transport either and it wasn’t easy for him to get to the bus stand or railway station. But despite all this, he always wore a smile on his face," said Manu Prasad, his classmate from the Chemistry Department at Maharaja's.

Abhimanyu's difficult background was something that many of his friends came to know about only after his death, "I had no idea about his family situation because he would never let it show and he barely ever spoke about it either. I found out only recently that he had failed in class X because the state of the school in his village was not very good. But he somehow put in all his effort and made it to college," said Abhijit Paul, another classmate of Abhimanyu, who also seconds Manu's statement about his constant smile. Silent walls: His friends say that Abhimanyu was known for his singing talent and would always be found singing in the college corridors.

Manu remembered that Abhimanyu had joined their class weeks after college had commenced, "After that, I barely saw him in class, all our interactions happened outside. When I joined the SFI, we bonded over politics and while organising activities for the group. If he wasn't in class or busy with SFI activities, he would always be seen singing some old Malayalam songs or folk songs that he learnt while growing up. There are also videos of him singing. He was also a good dancer. He would play football in the evenings and was very good at volleyball too. Even though he often missed classes, he was still friends with all our professors. That's the memory I have of him," Manu said.

His friends say that one of Abhimanyu's greatest dreams growing up was to study at Maharaja's and he didn't spare any effort to make sure that he did. Another dream he had was to be a member of the SFI and eventually become a leader. "He had blind faith in the SFI, every time there was a fight between two political groups he would always defend SFI, no matter whose fault it was. He was fiercely protective and defensive of the SFI, others would ridicule him about this obsession but nothing deterred him," said Abhijit. Through his association, he was also hoping to pave his own way into politics, "Since he had undergone such difficulties while growing up he hoped to join politics and bring about a change in his village as well as society at large," his classmate added. 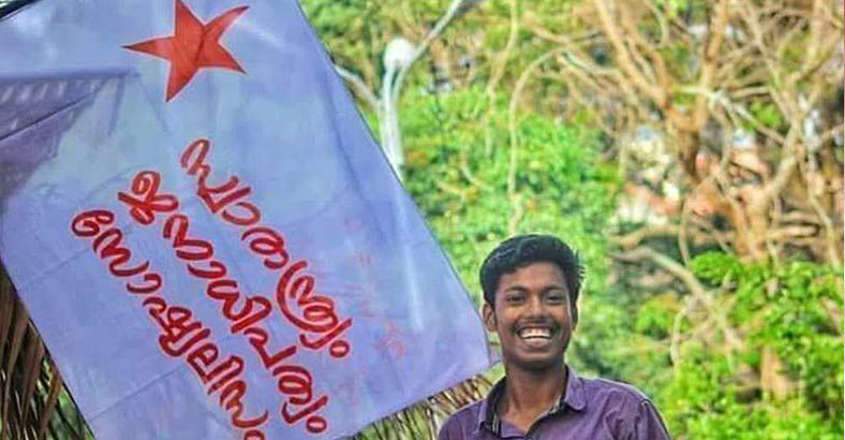 Blind faith: SFI meant the world to Abhimanyu and was always fiercely defensive about it too.

It was this blind faith that probably made him stand up to the members of the Popular Front of India’s (PFI) student wing. The two organisations were fighting over a wall — about who had the right to put up welcome posters for their upcoming batch. Abhimanyu and two of his friends were cornered by the attackers and Abhimanyu ended up being stabbed to death. He leaves behind his parents, his two older siblings, a grieving village and unfulfilled dreams to uplift that very village.

Amal Pullarkkat, a JNU student and SFI member, also recalled speaking to Abhimanyu on one or two occasions, "I did not know him personally but he would often tag me in posts related to SFI and sometimes, he messaged me on Facebook. Speaking about his death, Amal said, “It was only a simple fight but it turned out to be so gruesome that such a young man ended up murdered. We will fight for him, fight till he gets the justice he deserves."

In all the pictures that are being circulated of the late student, he can be seen with that wide smile that his friends never fail to mention and behind him are the long winding corridors of his college. The corridors that won't hear him sing again. "There's nobody who can ever replace him, no one can ever come close to having the infectious energy that he had," his friend Abhijit said. "I'm not a part of the SFI and I don't know too much about it. But I know that if there is one person who deserved to be called sakhavu (comrade) it is him. Only he can rightly lay claim to the word," Abhijit said.

One of his many dreams to come true soon

They are requesting people to start contributing books when they decide to visit Abhimanyu's house or are also inviting people to courier them over. If you would like to contribute the Vattavada gram panchayat, this is the address and contact details -