Imran Ali (23) was a frequent visitor of murdered Pakistani child Zainab's house in Kasur city in Pakistan's Punjab province. The murder and rape of the young girl, who in a video was seen walking off with an unidentified man sent ripples of shock through Pakistan. Today, Imran's confesion of the ghastly crime led to his arrest in the high-profile rape and murder case. Police sources confirmed suspect Imran Ali had confessed to his crime before an investigation team. A DNA test is awaited to confirm the alleged confession.

Imran was familiar with Zainab's family and would also frequent the minor girl's house, police sources said. Punjab government spokesman Malik Ahmad said that Ali had confessed to his crime. "Imran Ali's DNA test is underway and hopefully we will have the report later in the day," Ahmad said, adding the suspect has been arrested from Pakpatan district of Punjab. 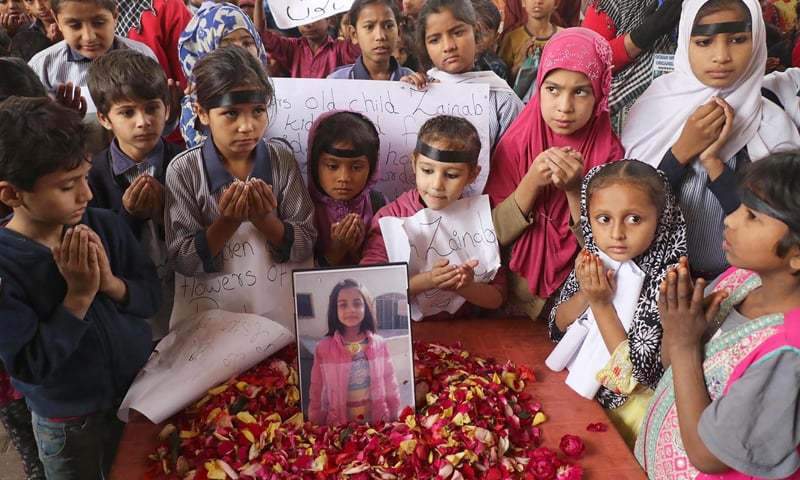 Tragic End: On January 9, her body was recovered from a heap of trash near the Shahbaz Khan Road. The autopsy report confirmed that she was raped

Police have carried out DNA test of over a 1,000 suspects. The Supreme Court last Sunday gave the Inspector General of Police a 72-hour deadline to arrest the culprit.  Violent protests gripped the Kasur city following Zainab's murder that claimed two lives. The Zainab incident also stirred a national outcry demanding justice for her.

Several of Pakistan's Twitterati tweeted their outrage and condemned the incident-

The beast !! Hang him. Reportedly claimed of doing all this on the advice of his "Pir". If true claim, nab the Pir. Hang him too ! #JusticeForZainab #JusticeForKainat pic.twitter.com/cqMnvQFjHd

Shockingly, it was discovered that #Zainab was not #ImranAli's first victim

The suspect, Imran Ali, is a serial killer based in Kasur who is accused of raping and murdering 6-7 girls over the course of two years. #Zainab #childabuse https://t.co/aifEX5bqaP

#Kasur: Speaking to #Zainab’s family & neighbors, a description I’m getting of the said culprit caught by police is as follows. Imran seemed like he doted on children - both girls and boys. Often bought candies for them. Freelanced with construction workers and was Naat khuwan.

What aggravated the situation much further was the nonchalance and lack of seriousness displayed by authorities of the Punjab province. It was worsened by their treatment of Zainab's father, who was in attendance for a press meet. Here is what happened:

I am Speechless!! Look at the face expression's of #Zainab's father after @CMShehbaz has turned off his Mic.
It's a JUNGLE, an Habitat of the Mighty one. Meek & vulnerable have no place.
NO Rule of Law. No Justice.#ShahbazSharif #ZainabMurderCase #ZainabMurder @ImranKhanPTI pic.twitter.com/CYrLEkUfMM

Will #ShahbazSharif utter a word of shame about how his police remained oblivion when this culprit had been doing this for so many years? Will he punish police officers too? #Kasur #Zainab

I do not believe for a second that the arrested guy was the killer of #Zainab He has been forced to confess so #ShabazSharif #PMLN can play poltics over #ZainabMurderCase #JusticeForZainab will be served !