Two months after it first offered security consultancy to schools, CISF experts have begun a mega exercise of auditing some big names in Mumbai, Hyderabad and Kolkata to ensure that any Gurugram-like student killing incident does not recur in educational institutions. The consultancy fee is around Rs 4 lakh for an average school.

A blueprint prepared by the force, accessed by PTI, shows that separate team of experts have begun work to provide foolproof security solutions at the Podar Education Network in Mumbai, Oakridge International Schools in Hyderabad and St Xavier's in Kolkata.

"Separate board of officers have been constituted and they are on job to draw a professional and sound security plan for the safety of students and staff of these schools. "Five more schools across the country have sent in their final approvals and such expert teams will soon begin their work at their facilities too," a senior force official said.

When contacted, CISF Director General (DG) O P Singh said the proposal made by the force to the schools, first in November last year, is getting a "good and positive response." "I have already said we took up this initiative as part of our responsibility towards the society. We are always happy to extend help of our professional services," Singh said. 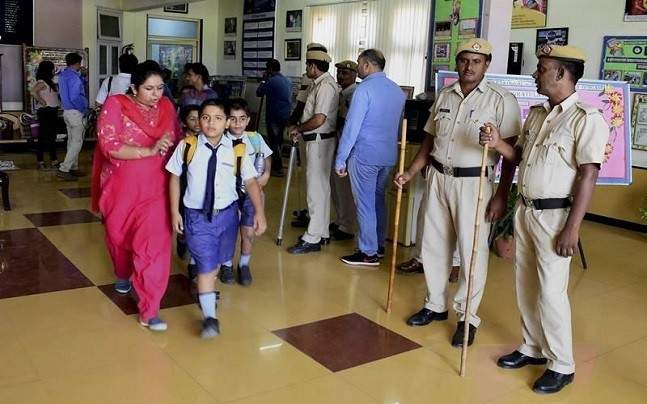 On Alert: A senior official, quoted earlier, added that as of today, the force is in talks with about three dozen schools in various parts of the country

"Members of the elite security consultancy wing has been asked to be prepared and move out to schools at a short notice so that this task is carried out as fast as possible.    "The command of the force has categorised this work as a  priority subject," the official said.

The force, last year, had dispatched letters to a number of schools in the country offering its help in creating a "safe and secure" environment for their students. The trigger for this all-India exercise by the force was the September, 2017 killing of a Class 2 student of the Ryan International School in Gurugram, who was found dead in the school bathroom with his throat slit. The force, in its message, had assured the schools that its professional but chargeable security solutions will be custom-made for them like it does for each of its clients.

"It is felt that in the wake of the recent unfortunate incident in one of the reputed schools in the national- capital-region where a young student lost his life, there is now a need for revisiting the security infrastructure of our schools. You will agree that a healthy and secure environment is a right of every child and schools have a major role to play in the providing the same," the CISF letter addressed to the schools read.

The CISF's security audit provides professional advise to schools as to where to install CCTV cameras, where to deploy security staff, how to check access control, how to train their security staff and install emergency response gadgets. The consultancy wing has shared its expertise with over 150 organisations or institutions, including IITs, IIMs, RBI and the National Police Academy in Hyderabad among others.