Remember those two Muslim students from Jaipur who bagged top positions in a contest on the recitation of the Gita verses? One among them is now passionately learning Sanskrit

Sixteen-year-old Nadeem Khan, who recently won the State-level Bhagvad Gita competition in Rajasthan, is passionate about learning the Sanskrit. He finds the language quite simple, interesting and easy. According to him, the Bhagvad Gita shlokas have in-depth inspiring messages and he loves to recite them.

This Sanskrit lover felt inclined towards the language when he was in Class VI. He feels that there is something magical in the language and hence he started taking a keen interest in it. "My teachers helped me in developing my passion (for Sanskrit)." He first saw the Bhagwad Gita in his school library and as he opened it and started reading it, he found it very interesting. Then and there, Nadeem decided that he would learn the shlokas from there. "We used to have regular assembly sessions in the morning, after which we were given freedom to say anything inspiring.

It was on this platform that I started sharing these inspiring shlokas," he said. Nadeem also shares a strong bonding with his friends, most of whom are Hindus. "Whenever I visit the home of my friends, I make sure I touch the feet of their mothers who treat me as their son. We really share a strong bonding," he added. He gives credit for his success to his parents who always prompted him to follow his heart and never stopped him from reading the Gita. Also, they never pressurised him to learn Urdu. "I always used to recite these shlokas with my father who would sit and listen to them with patience despite the fact that he couldn't understand it," he said. Nadeem felt truly happy when he was felicitated at the Gita Fest. 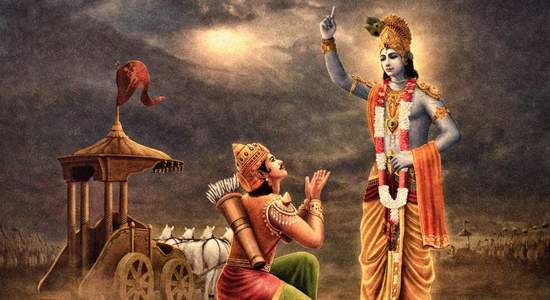 "I also felt proud when our village Sarpanch came to our place and felicitated me. His words were really inspiring. I had tears in my eyes when he said, 'This boy proved that school is a temple of knowledge as he has learnt a language without having any bias for caste, creed or any such parameter'." A student of Rashtriya Adarsh Uchh Madhyamik Vidyalaya in Kanota, Nadeem wants to become a doctor. "I belong to a poor family and have seen financial challenges coming in when any member of my family fell ill... I want to serve the poor by becoming a doctor," he added.

There were two other Muslim students from Jaipur who bagged top positions in a contest on the recitation of the Gita verses. They are siblings -- Zaheen Naqvi of Class II and Zorabia Nagori of Class IV. Their father Tanweer Ahmad is proud of his young kids who, according to him, learnt the Sanskrit verses on their own. "They are yet to have Sanskrit as the official subject in their school, but they made efforts to get their name registered in the competition and then worked hard. Their teachers also helped them come out with flying colours," he said. As the siblings were out on their winter vacation, they could not be contacted. However, their father was determined to help his children carve a niche for themselves in the fields of their choice.