Chennai PG student stabbed by boyfriend when she tried to break up with him. Here's why it shouldn't shock us

The number of incidents in Tamil Nadu where men, young and old, have attacked women who have spurned their advances is downright frightening. Check the list inside

In a continuing series of horrific acts of violence — by men spurned, jilted or ignored by young women — things got terribly worse on Tuesday as a PG student was brutally stabbed in broad daylight, in the upscale Anna Nagar area of Chennai. The second-year post-graduate student was allegedly stabbed six times on Tuesday afternoon at the Anna Nagar Tower Park, by a man who was believed to be compelling her to continue a relationship with him.

The assailant, identified as N Rajesh (23), an electrical engineer, subsequently hurt himself too with the knife he was carrying, police sources said. Ramya, 22 (name changed), pursuing MSc mathematics at a private college in the city, suffered six cut injuries on her chest, right shoulder and stomach and underwent a surgery, while the boy suffered four cut injuries on his chest and stomach and was also admitted to the intensive care unit.

“On Tuesday, Ramya came to meet Rajesh in the park to end their relationship. She was accompanied by a college friend and the duo (Ramya and Rajesh) were standing near the toilet inside the park and were talking. When Ramya was about to leave the spot, Rajesh tried to stop her and allegedly started attacking her with a knife he was carrying and also hurt himself,” said a senior police officer. 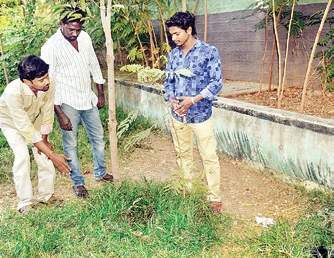 Red-handed: The spot in a park in Anna Nagar where the girl was stabbed
| D Sampath Kumar

Hearing screams, the public rushed to rescue the girl and a tea vendor is said to have taken the girl to a nearby private hospital. The boy was also taken to another private hospital in the same locality.

When Express visited the spot nearly three hours after the incident, there were blood stains on the grass.
Ramya is a resident of Red Hills and her father works as an electrician and Rajesh is a resident of Ponneri.  The duo were schoolmates and knew each other since class 9.

Unfortunately, this isn't the first time a young girl has been attacked by a man or a boy.

Feb 16, 2018
A minor girl was torched by a 22-year-old spurned suitor, at Achampatti near Thirumangalam, in Madurai.

Apr 1, 2017
John Mathew (22) allegedly bludgeoned a girl to death and subsequently committed suicide by hanging at Mamallapuram. Investigation revealed the girl had decided to end the relationship which upset him and forced him to take the extreme step

Sep 15, 2017
S Dhanya (23) was hacked to death at her house in Coimbatore, allegedly by a man whose proposal she had rejected.

Sep 1, 2017
Francina (25), was allegedly hacked to death by her jilted lover J Keegan in a church at Thoothukudi.

Aug 3, 2017
K Sonali (19) was clubbed to death by her senior-Udayakumar (22) inside the classroom at a private engineering college near Karur after she rejected his proposal.

June 24, 2017
Swathi (24), an IT employee, was hacked to death at Nungambakkam railway station by a jilted lover which created an outrage.

(This story was first published in The New Indian Express)