Young survivors of Florida school shooting, which left 17 people dead last week, announced on Sunday a national march to Washington to demand political action on gun control. Students from the Marjory Stoneman Douglas, Florida said they were determined to make Wednesday's shooting a turning point in the national gun debate and march to Washington on March 24 to seek an action on gun control, BBC reported.

"We are losing our lives while the adults are playing around," the report quoted Cameron Kasky, a survivor from the school, as saying. The shooting reignited demands for tougher gun laws, with student survivors gathering in Fort Lauderdale on Saturday to criticise Trump and other lawmakers for their inaction. Raise your voice: The Florida school shooting was seen as the last straw by students and seniors tired of the loose laws around gun control

No more backing down

One of the high school students- Emma Gonzalez, while addressing the rally slammed the US President for accepting political donations from the National Rifle Association (NRA), a powerful gun-rights lobby group.

"If the president wants to come up to me and tell me to my face that it was a terrible tragedy and... how nothing is going to be done about it, I'm going to happily ask him how much money he received from the National Rifle Association," said Gonzalez.

"It does not matter because I already know. Thirty million dollars," the 18-year-old said, referring to donations during US President Donald Trump's presidential campaign.

Trump has blamed the Democrats for not passing legislation when they controlled Congress during the early years of Barack Obama's administration. He also slammed FBI for not acting on tip-off about the suspected shooter Nikolas Cruz. The US news network CNN has invited Florida lawmakers and Trump to attend a town hall event with survivors of the attack on Wednesday, the report said.

Trump was rebuked by students on social media for doing nothing about gun laws and is on their target of people to approach in the waking movement. 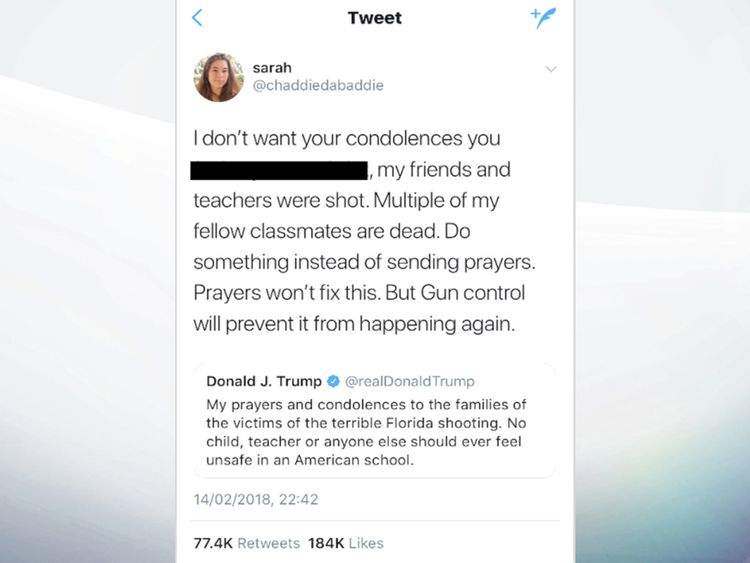 Too late to say sorry: This student had a fitting reply to Trump's condolence tweet, calling for strict action and laws that will make America safe again

Former Marjory Stone Douglas student Nikolas Cruz walked into his school and went on a shooting spree, killing 17 people including three staff members. The boy was later arrested by cops and students were evacuated from the building.