Protests at JNU: Students put up posters asking the VC to permanently 'absent' himself

This past weekend in JNU was reminiscent of the events of February 2016 — the year that brought student politics to the front pages. More than 2000 students took to the streets on Sunday night to protest — but for a whole new reason - to demand a rollback of the much-hated compulsory attendance rule.

Ironically. while the VC has asked them to mandatorily make it to class, the students are now pushing for him to be permanently be marked 'Absent' — by calling for his resignation. The students have decided to make this an indefinite protest, "On Sunday evening we met at Ganga Dhaba and walked till the administrative block at nine in the night. But this protest is not just for the rollback of the attendance rule, we are also demanding that the VC immediately resign from his post. He is morally incompetent to run a place like JNU," said one of the students. "We've stuck posters all around the administrative block demanding his resignation and ridiculing the attendance rule. We are not going to concede defeat. We're not giving up till the VC puts in his papers, back to back protests will continue," the students said.

Watch a video of the protest here-

What is this attendance row all about?

A few months ago, the JNU administration made it compulsory for students to have 75 percent attendance in class. The students' fellowships and scholarships also stood a chance of getting cancelled if the students failed to garner the necessary attendance. The decision has not gone down well with the students but since repeated requests to repeal the rule have fallen on deaf ears, the students have gone the JNU way: protest on campus. And well, those classes are definitely going unattended.

The JNUSU and the JNUTA have maintained that all these years students have only been penalised for their performance and attendance has never been a criterion. In her piece on the issue in The Indian Express, Ayesha Kidwai said, "Teachers over the past five decades of the university will attest to the fact .... not only do students often request regular teachers for extra and unscheduled classes, senior students/visiting faculty/post-doctoral fellows get railroaded by curious, hungry students into teaching completely impromptu month-long courses and workshops. There are also remedial classes run for the weaker sections taught by research students, reading group classes run by research students, and of course, the classes run by various campus political organizations." 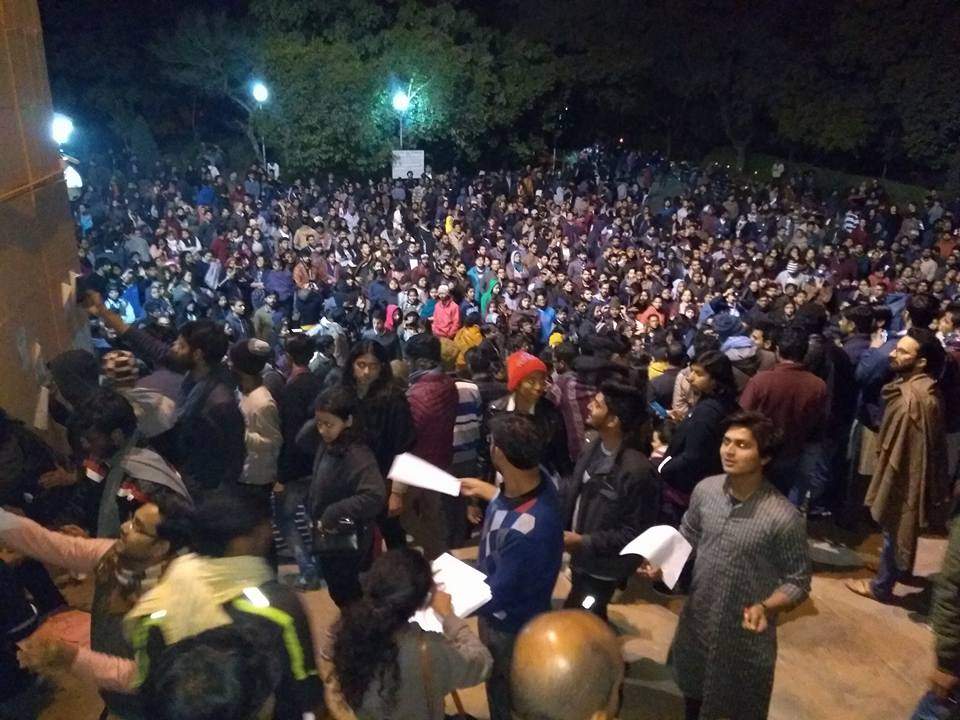 February Flashback: Despite the administrative block being a "no-protest" zone, students are not letting that stop them from holding their protests.

The students, therefore, find it unacceptable that they will be forced to give attendance during every class but as previously mentioned neither their requests nor their protests have gotten the VC to change his decision. Therefore the students came out in masses to put up a united front.The members of the Student Union have already been issued notices to stop the protest claiming that the rule was made only after the academic council approved it, which has completely been denied by the Student Union. The students say that the decision was completely unilateral.  "Thousands of students came out to protest, we have to wait and see how many issues they're going to issue to us. But we will come back every day," the student leader said.