Students and professionals from Jammu and Kashmir who are studying and working in Pune on Saturday met Pune Police Commissioner Rashmi Shukla and expressed concerns regarding their safety in the city. They demanded that a nodal police officer from J&K be appointed to address their issues. The concerns rose after two students from valley were thrashed allegedly by nearly 15 people on February 2 evening in Haryana's Mahendragarh after Friday prayers.

During the interaction with Shukla, Owais Wani, a post graduate student, said youth like him have no one to contact with except Sarhad founder Sanjay Nahar. "....If any incident happens with any Kashmiri student or working professional, his or her only point of contact is Nahar Sir. Someone like a special nodal police officer, preferably from J&K, should be appointed in Pune to address the issues of Kashmiri students studying here," Wani said.

Wani said he was talking to Shukla without any fear now but cannot do so with other police authorities who he might have to approach in case of any incident. "Once I went to a firm for an interview but the moment the company officials came to know that I belonged to J&K, they refused to entertain me and did not even interview me," he said.

While accepting the plea partially, Shukla said a police inspector or an ACP-rank officer will be designated who will coordinate with students and local police authorities, in case of any tension or incident.

"I cannot bring someone from Kashmir. Whatever we can do, we will definitely do for the Kashmiri youth. You can always message me or coordinate with the designated officer and we will definitely help," the police commissioner said.

Some students shared their experience and the discrimination they faced from people and authorities.
"Since we all belong to J&K, sometimes, people including the local authorities look at us with suspicion and even become judgemental," complained one of the students.

On the other hand, a young woman said that after completing her mass-communication course in Shimla, she started working in Delhi before moving to Pune for safety reasons. "Pune is quite peaceful and safe," she said. 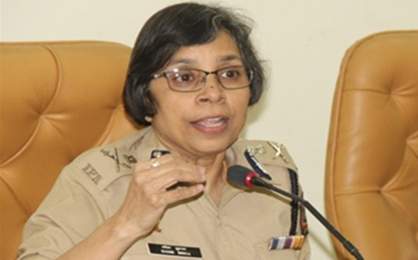 Good encounter: Nahar said the meeting was fruitful, though commissioner Shukla did add that while she couldn't get an officer from Kasmir, she would provide other feasible solutions

Meanwhile, Nahar said "Pune has been the second home for the Kashmiri youth who think that it is one of the safest cities in the country. With the police commissioner promising to designate a dedicated police officer to address the issues of Kashmiri students, we will together create such a mechanism here, which will be ideal for other states and cities also, in order to bridge the gap between Kashmiri students and local people," he said.

A 21-year-old woman Kashmiri student of a Pune college was briefly arrested in April 2017 along with her male friend for allegedly trying to snatch the revolver of a police officer in Bharti Vidyapeeth area. She left to Jammu and Kashmir as she did not want to stay in Pune as she felt "unnecessarily defamed" in the wake of the incident.

Centre's interlocutor for Jammu and Kashmir, Dineshwar Sharma, who visited Pune recently, had also interacted with Kashmiri students and pitched for a "mechanism" to address the issues faced by  Kashmiri youth residing in the country. Sharma had met Shukla and asked her to create a mechanism through which a Kashmiri youth in times of dire need could call the authorities.