M Jagadesh Kumar was accused of tweaking minutes of the JNU Academic Council's meeting without other members' consent, and for weakening sexual harassment watchdog GSCASH, among others

A first in the history of the Jawarharlal Nehru University (JNU), its Teacher's Association (JNUTA) on Monday conducted a public inquiry of Vice-Chancellor M Jagadesh Kumar, where he was unanimously held guilty by a five-member jury of violating statutory provisions and academic norms. The "public trial" is one of four to be conducted daily, starting Monday. The jury recommended an inquiry by the President of India - the ex-officio Visitor to JNU - against Kumar.

The jury held him prima facie guilty and unfit to be the VC of JNU. We recommend a Visitorial Enquiry into the charges and his removal from the office of VC

The 'public trial' was held on the Sabarmati lawns on campus, which began with the reading of charges against him by JNUTA President Ayesha Kidwai, Economics Teacher Jayati Ghosh and Professor Ravi Shrivastav. Members of the jury were JNU professors Prabhat Patnaik (emeritus), P K Yadav, Delhi University professors Nandita Narain and Apoorvanand and senior journalist Akshaya Mukul. 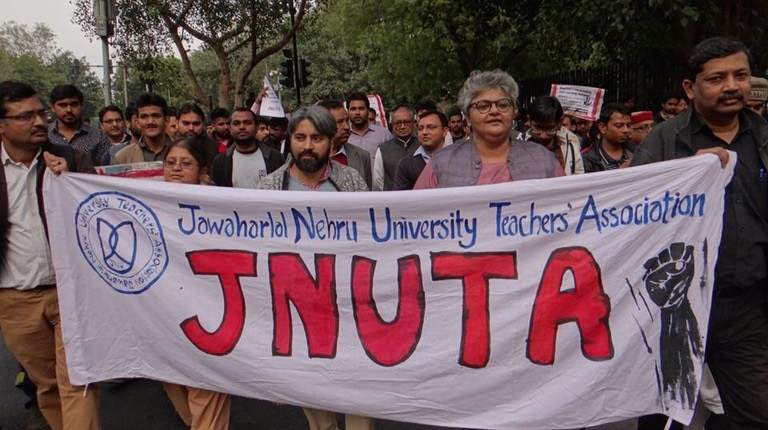 Time Limit: The JNU Teacher's Association has reportedly set a three-day deadline for Kumar to submit his defence

Kumar was held "guilty" for, among other things, allegedly bypassing the JNU Academic Council and tweaking minutes of its previous meetings not consented to by members. Some of the other allegations included undermining the integrity of the faculty selection process, violation of reservation policy, harassing teachers, denying their legitimate dues, undermining sexual harassment watchdog GSCASH and for his callous attitude in missing student Najeeb Ahmed's case.

"All the democratic institutions at all levels, including GSCASH, are being undermined for a specific agenda. The agenda is not an academic agenda but a destruction of critical thinking, dissent and academics," Ghosh told the jury.

The Vice-Chancellor was represented by JNUTA Vice-President Amitabh Singh, who countered all charges by saying that there was no "inserting of minutes" in the Academic Council meetings and in all the cited instances of alleged violations he had duly "upheld the law". Prof Amitabh Singh read out statements which Kumar had issued on various occasions countering the allegations against various decisions the administration had taken.

On October 17, JNUTA had announced a "public inquiry" against Kumar for allegedly violating various conventions of the university. The inquiry would continue over the next four days.