While club football has a global fan base, America's professional league might seem to many as a glorified exhibition

For the Americans, it always has been and will be soccer, rather than football. Perhaps that in itself might suggest to many that the game isn't top priority on their sporting agenda. But jokes apart, even as the juniors get ready to face off against England here come Saturday, it’s been only a week since the senior American team failed to qualify for the 2018 World Cup.

It’s not as if they lack in talent or facilities. If you take a look at the traditional footballing nations, league structure is a major contributor to their success. Club football has a huge fanbase around the world, and some from Europe are regarded as the best. In comparison, America’s professional league — Major League Soccer (MLS) — might come across as more of a glorified exhibition.

On Sunday, Ricardo Kaka — one of the most decorated players of his generation — called time on his career after three years with Orlando City. While superstars like David Beckham and Thierry Henry have graced American football, they did so towards the very end of their career. For a youngster who is looking to play at the highest level, running around with footballers past their prime is not going to be of much help. 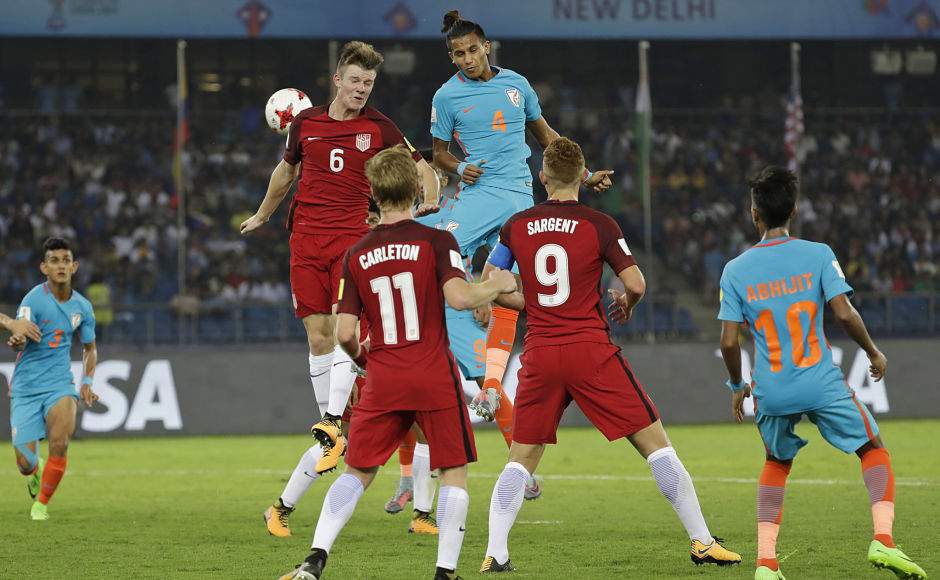 Bleeding Blue: The boys in red beat India 3-0 in the opening match at Jawaharlal Nehru Stadium

If you look at teams like England or Germany, most of their playing eleven are from domestic leagues, which are considered much more superior in terms of standard and popularity. But the South Americans, who have a majority of their footballers playing in Europe, have still been successful at the international level.

So, it’s not just about playing in their home countries. It also depends upon the intensity and competitiveness of the matches they play. “Our league always gets better. I think the number of teams which just take on guys who are going there to retire is getting lesser and lesser. It’s a hard league and we are still in the early phases of that growth," John Hackworth, coach of the USA U-17 team, said.

"In fact, we are also attracting a lot of young, talented players. There is a guy in Atlanta United called Miguel Almiron — from Paraguay — who is currently being considered by many European giants. So, there is a shift and that is really good for both the league and American football.”

While players like Christian Pulisic and Clint Dempsey have been successful while playing abroad, American football's sojourn towards perfection is far from complete. But for now, things are slowly changing, and John is hoping that it will soon reflect in the way people think about the sport in his nation.

"I think six players from our squad have already signed professional contracts with MLS clubs. And there are four in Europe. For an American player, playing professionally in our country is a much easier path. But, American football is slowly getting recognition from some major footballing countries. So it’s only a matter of time, and you have to keep proving yourself on the world stage,” he adds.