No play time for Delhi kids after IMA docs say that polluted air is too dangerous for kids to play outside: Kejriwal asks Edu Ministry to shut schools down till air clears

Chief Minister Arvind Kejriwal asked his deputy Manish Sisodia on Tuesday to consider shutting
schools for a few days after Delhi showed alarming levels of pollution and a dip in visibility, the second time for the national capital after Diwali. The Indian Medical Association (IMA) also called the situation a "public health emergency", and appealed to the Delhi government to stop outdoor sports and other such activities in schools to protect children's health.

Considering high level of pollution, I have requested Manish Sisodia, Education Minister, to consider closing schools for few days," Kejriwal tweeted. Sisodia, who is also Delhi's education minister, has directed the environment department to submit a report on the city's pollution level by this evening. He said that the Delhi government would take a final decision on the closure of schools and introduction of the odd-even car scheme after examining the report.

The city's pollution level has hit alarming numbers, with visibility down to 100m according to reports. The Air Quality Index shot up to 400 in many places in the national capital by morning, the second such spike since Diwali. The IMA stated that children, who play or exercise outdoors need more oxygen, so they take in more polluted air into their lungs, which hampers the growth of their lungs leading to breathing problems later on in life. 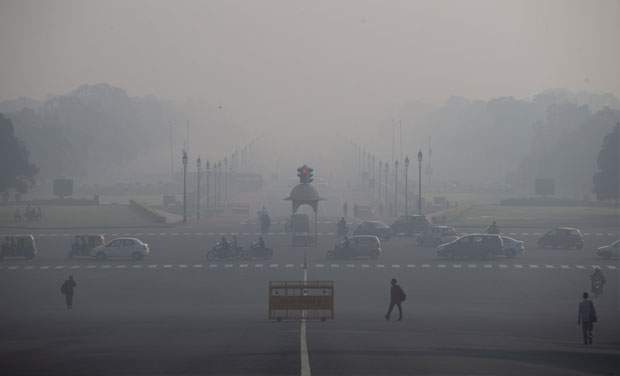 Peek-a-who: Delhi was covered with a misty haze that is said to contain high level of toxins and substances harmful especially to kids

"We are closely monitoring the situation and will take a final decision on it once the report comes. The Delhi government has requested the Centre several times to intervene in the issue of crop burning in neighbouring states but the central government has not responded yet," he told reporters.

The rapid fall in air quality and visibility began on Monday evening as moisture combined with pollutants shrouded the city in a thick cover of haze. By 10 am today, the Central Pollution Control Board (CPCB) recorded 'severe' air quality, meaning the intensity of pollution was extreme.

The IMA mentioned in the letter that when the Air Quality Index (AQI) levels cross 200, it is "generally advised" that time spent outdoors be restricted. "Hence all outdoor sports, marathons and other outdoor
activities in schools should be stopped. Children are more prone to harmful effects of air pollution as their lungs are still growing," the letter said.

The association has also urged organisers of the Delhi half marathon and Delhi Chief Minister Arvind Kejriwal seeking cancellation of Airtel Delhi Half Marathon because of the increased pollution levels in the air. The event is scheduled to be held on November 19.