Breaking barriers: Tribal woman becomes nature's saviour, joins hands with her community to save few trees for the future

Jamuna Tudu, On her journey in saving the mother nature had succeeded and now with 150 committees  comprising more than 6,000 members in her movement to save the forests, she is doing more

Armed with just water bottles and sticks, a group of poor tribal women in Muturkham village of Purbi Singhbhum district of Jharkhand trekked miles to the sal forest that surrounded their habitat, with a mission to save the forest from being plundered and denuded by the "Forest mafia".

Accompanied by just a dog for their safety, these determined women made frequent forays into the deep forest with which they shared a symbiotic relationship and have been able, over the years, to successfully conserve 50 hectares of forest land and its flora and fauna deep in the heart of a territory that has also been a battle zone between government forces and left-wing extremists.

This group was brought together by Jamuna Tudu, who has spent the last two decades of her life fighting against deforestation. It was in 1998, after her marriage, that Jamuna took up this challenge of preserving the forest by making villagers develop a stake in it. Today, her Van Suraksha Samiti (Forest Protection Group) has about 60 active women members who patrol the jungle in shifts thrice a day, as the mafia set fire to the forests in random acts of vandalism and vengeance. Jamuna's fight has not gone unnoticed. The President of India has honoured her conservation efforts.

"Few days after my marriage, when my mother-in-law, sister-in-law and a few other women from the village took me to the forest to cut wood and get it to cook food, I felt that if we keep cutting the trees this way, all our forests will be wiped out," Jamuna recalled 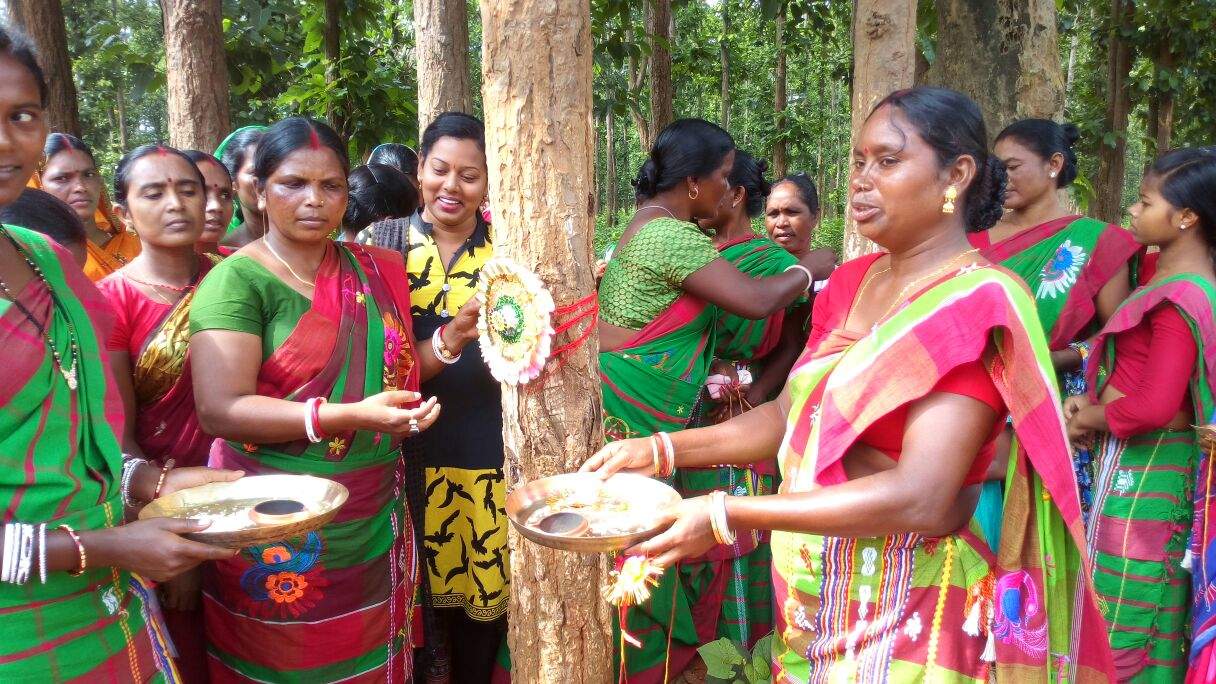 Go-green: Jamuna Tudu who has studied up to Class X, foresaw a bleak green-less future for herself and her community with no trees a to sustain and wanted to save them

In her quest, she had to battle against the mafia that was chopping down trees for their precious sal timber with complete disregard for the law or the tribal tradition that prohibits cutting of the trees. Realising that she would get little help from authorities, who may well have been hand in glove with the mafia, she took matters into her own hands. She spoke to a few women of the village who were quite aghast at the task she had taken on. We won't do it; this will require us to fight the men in the village, they told her. But Jamuna, who has studied up to Class X, foresaw a bleak green-less future for herself and her community with no trees and forests to sustain or protect them.

'Jungle Nahi rahega toh paryavaran kaise bachega (how will we protect the environment if the forest is destroyed)?' she asked. Jamuna's clear understanding of the issue soon trickled down to the other women and even men in her village. "I was brought up with a love and respect for nature. My father used to plant many trees on our farms in Odisha. That's where I learnt the importance of the environment," she said.

Pointing out how the mafia was exploiting the wood from Muturkham to fund their alcohol needs, she said she was bewildered by the passive response of the community at their habitat being slowly destroyed. "I went on to speak to a few women in the village. I held a meeting with them several times to be able to convince them that we needed to protect our beautiful forests," she said.

Gradually, she mobilised a group of 25 women from the village and armed them with bows and arrows, bamboo sticks and spears, they marched into the forest to take on the forest predators. With time, many men also became part of the campaign against deforestation, but most of the effort has continued to be from women, said Jamuna. Jamuna Tudu: I told those women that in this journey, we would come across both good and bad times, but we have to struggle to keep the forest

There are many daunting challenges that came their way, but their single-minded dedication towards their cause kept them going. "There were too many altercations with the village people initially, many scuffles with the mafia and I told those women that in this journey, we would come across both good and bad times, but we have to struggle to keep the forest," said Jamuna.

The group convinced the railway authorities to bar the plundered wood from being exported. "Sometime in 2008-09, we were brutally attacked by the mafia," she said. "They pelted stones at us while we were coming back from the railway station after speaking to the station master. Everybody got injured," she added.

For obvious reasons, Jamuna, the woman whose initiatives were hampering their business, was their main target. She and her husband suffered most in the assault. "My husband got hit on his head as he tried to save me. It was dark and we somehow managed to run away. We narrowly escaped death that day." But she did not give up.

Over 15 years of many fierce encounters with the mafia and relentless sensitisation of the community, Jamuna, and the Van Suraksha Samiti that she formed, have succeeded in protecting and conserving the 50 hectares of forest land not just surrounding her village, but around many others as well. Tribal communities cannot survive without wood. They need it for various things -- mostly to cook food. But they ensure that their requirements remain within sustainable limits.

"We don't cut trees on purpose anymore and use the fallen trees and branches for all our needs," Jamuna said. "The amount we are able to save up during the rains is sufficient for the whole year. "The Forest Department has "adopted" her village, which has led to Muturkham getting a water connection and a school.

In 2013, Jamuna was conferred with the Godfrey Phillips Bravery Award in the 'Acts of Social Courage' category and this year in August, she was awarded Women Transforming India Award by the NITI Aayog. Today, she runs awareness campaigns through various forest committees in Kolhan Division. Around 150 committees formed by Jamuna, comprising more than 6,000 members, have joined her movement to save the forests.

She wants to do a lot more. "I wish to do a lot... to make a lot more difference, but I am bound by limited resources. I can't in many ways afford to go beyond the villages in my state. But if I get more support, many more forests like ours can be saved, she declared.