Lessons from the past: Government announces holidays to prevent possible hardship to students

After the torrential downpour, the city has been affected in its normal functioning for the past week.Though The government seems to have not taken preventive measures even after affected by floods and cyclone for the consecutive years. The schools are the first ones to be closed down and this time its been a week now

Whenever there is a heavy downpour, the government announces holidays for educational institutions, particularly for schools. This prompt action is, in fact, helping children and their anxious parents remain relaxed at home instead of venturing out in the showers, it is pointed out. Of course, a few cry foul over the loss of school days due to the holidays.

Since the sky mainly opens up in the afternoon during the Northeast monsoon, children face the risk of getting stranded if there is torrential rain when they return home. This apart, the convergence of a large number of vehicles around school zones leads to traffic snarls, sometimes disrupting vehicular movement resulting in a ripple effect. 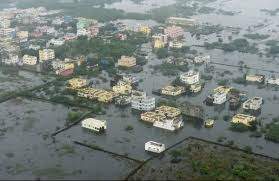 "Besides ensuring the safety of children, rain holidays also help avert traffic congestion that may impede relief works during torrential rain," said K Satyagopal, Commissioner for Revenue Administration (CRA) and Relief Commissioner. Schools located in Chennai city, which have been bearing the brunt of monsoon fury over the last few days, have been closed for four consecutive days ever since rain began to pound.

Rain holidays were of immense help to the authorities involved in relief operations during cyclone 'Vardah' that hit Chennai and its neighbouring districts last year. The official recalls, "On the day when 'Vardah' made the landfall, an announcement of holidays to schools and colleges was of immense help as the cyclone crossed in the afternoon. Had schools been functioning, it would have put the children at risk. It helped us minimise the woes of the public."

Learning from the past, the government now announces holidays to prevent possible hardship to students.
Another major concern of the authorities is resultant traffic snarls impeding relief operations, including cleaning up drains, canals and pumping out stagnant water from the streets.