Baby bats more likely to pick up language and sounds from colony instead of the mother, finds study

The study also shows that bats are different from songbirds, which tend to learn songs by mimicking one of their parents

Baby bats pick up the groups dialect or accent and learn the language from peers in their colony and not the mother, a new study has found on Tuesday. The difference is similar to speaking with a London accent versus a Scottish accent, said the report in the journal PLOS Biology. The findings shed new light on crowd-learning of language, a skill thought to belong mainly to humans and just a few other mammals.

"The ability to learn vocalisations from others is extremely important for speech acquisition in humans, but it's believed to be rare among animals," said lead author Yossi  Yovel of Tel Aviv University. "Young bats pick up the dialect vocalised by their surrounding roost-mates."

For the study, researchers captured 14 pregnant Egyptian fruit bats and separated them into three colonies where they raised the young bats with their mothers. Each colony was exposed to a different recording of bat vocalisations. The juveniles all adopted vocalisation of the group they heard, and not their mothers. 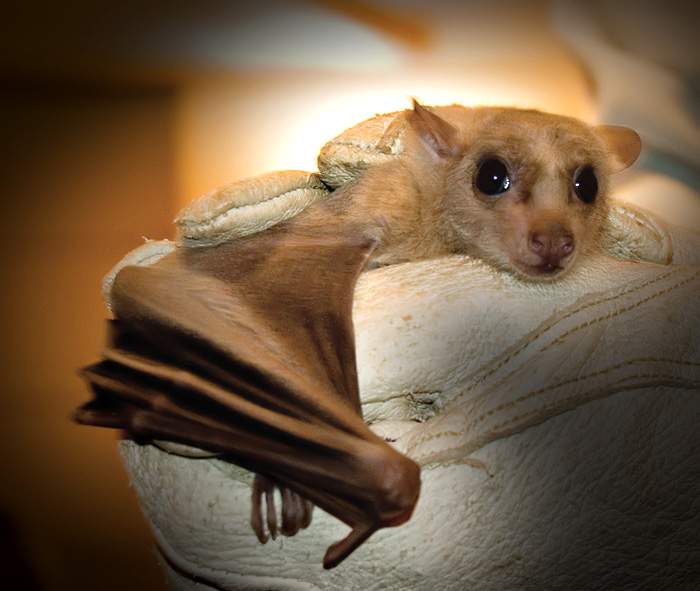 Bat Hears: Ability to learn vocalisation is key to speech acquisition in humans but is rare among animals

"The difference between the vocalisation of the mother bat and those of the colony are akin to a  London accent and, say, a Scottish accent," said Yovel. "The pups heard their mothers' 'London' dialect, but also heard the 'Scottish' dialect mimicked by many dozens of  'Scottish' bats," he added.

"The pups eventually adopted a dialect that was more similar to the local 'Scottish' dialect than to the 'London' accent of their mothers." Researchers hope to conduct future studies to examine how bats' dialects change when they leave their colonies, and if it affects how they integrate with others.

"Will they adopt the local dialect or will they be rejected by the group? Or maybe the local colony will change its dialect to adopt that of our bats," said Yovel. "There are many interesting avenues yet to explore."