Is Junk food taking over the place of healthy food in your kid's lunch box? Here's something you should know

According to Safe and Healthy Food guidelines published by the Indian Medical Association Kerala, the perfect lunch for a child should include rice, pulses and vegetables

For every school-going kid, lunch or tea-break is the one period they longingly await when they get to eagerly open their tiffin boxes and munch the food that their mothers packed for them. Every child prefers junk food over the regular tradition affairs like idli, dosa, chapattis etc. But should a parent relent to their wishes?

Paediatricians and dieticians in the city say the number of parents seeking treatment for their children afflicted by lifestyle diseases has increased in the past few years. After an in-depth investigation it was found that parents are increasingly sending their children to school with tiffins packed with junk food such as burgers, pasta and sandwiches or fried and bakery items such as chips, biscuits and cakes.

Ramya Prasad, a parent of two, says, "I normally pack food items like idli, dosa or chapattis that they have in the morning, for lunch. For snacks, they usually take biscuits or chips." I try to ensure the kids do not eat too much junk or fried food, even though those are what they prefer, she adds.

According to Aster MIMS hospital dietician Sherin Thomas, even having biscuits or chips for tea-break or retaking the food cooked in the morning is classified as unhealthy dietary habits and can eventually lead to obesity. “In most of the cases, the parent is too busy with his or her work and do not have time to prepare a separate lunch. Hence, they give the food prepared in the morning such as chapati, noodles, sandwiches or even the food cooked the previous day. A lot of parents I have met fall under this category,” she says. 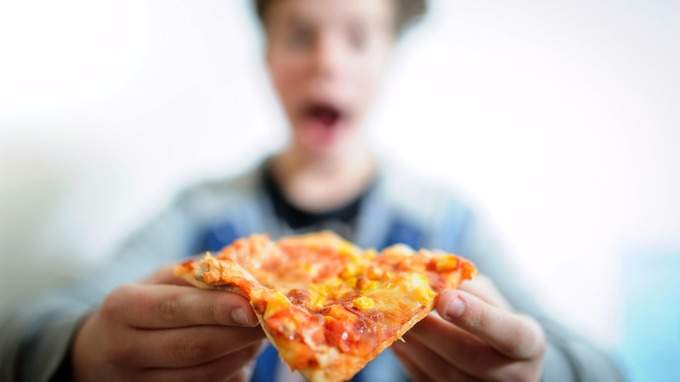 She suggests easily preparable food items such as lemon and tomato rice to be replaced with pulao or a wholesome meal that contain vegetables. "In a number of houses, rice is not usually consumed for dinner. So it should be taken at least during lunch," she says. In addition, the food items given for snacks such as chocolates, biscuits etc should be replaced with fruits and nuts, she adds.

The reasons behind the unhealthy eating habits are manifold.  "In several cases, the child would be extremely health conscious. Peer pressure also plays an important role. The child in order to appear cool wants to show that he or she also has exciting and fancy food items to share. So they insist their parent to pack junk food for lunch. Sadly, many parents yield," says Sherin.

A kid above seven years of age should only have 1,700 to 2,000 calories. But as of now most kids who turn up for consultation exceed the limit. This occurs in cases where a calorie-rich food such as chicken is eaten more than one time a day

According to the guidelines on Safe and Healthy Food published in 2015 by the Indian Medical Association Kerala branch, the perfect lunch for a child should include rice, pulses, vegetable while snacks should consist of nuts, steamed food, buttermilk etc. Indian Academy of Paediatrics (IPA) Kozhikode secretary Ranjith P says a healthy meal should consist of one-third of all nutrients and mineral.

“A kid above seven years of age should only have 1,700 to 2,000 calories. But as of now most kids who turn up for consultation exceed the limit. This occurs in cases where a calorie-rich food such as chicken is taken more than one time a day,” he says.

Though awareness classes are conducted in schools and other institutes for parents and students on healthy eating habits, only a handful of families heed to it. Amina M, who takes care of her daughter’s five-year-old son, says in the PTA meetings held at school, discussions often revolve around dietary issues. "Though we have stopped packing fried snacks or biscuits for tiffin, several parents continue to do so, “ she says.