Children's love for Barbie is boundless, Now India has its own kind of desi fashion doll known to be India's Barbie and Kiyaa is in the making of them.

A Korean research team to visited the Kiyaa Doll studio in Hyderabad to study the doll. The Korean team comprised of Hyun Lee, the researcher from Folk Research Division in National Folk Museum Korea (NFMK), who is working with the curator Koo. Accompanied by Kim, a visual documentarian, and interpreter Danesh Kumar, the team visited the studio at Srinagar Colony in the city

The NFMK is researching on Korea and worldwide dolls as a team. The team has plans to visit representative areas in Asia, Europe, America, Africa, and investigate their toys and cultures related to them. "I first surveyed Japan including Tokyo and Osaka in April, and secondly Europe including the Czech Republic, Germany, and France in July. And then, now I am in Hyderabad and will be visiting Delhi,  Udaipur, and Bengaluru from 19 October to 31 for about two weeks," informed Hyun Lee, the researcher.

"Through the investigation of dolls ranging from traditional dolls to modern dolls in India, I'm trying to identify the diverse perceptions (memories) of Indian dolls and everyday life culture. I will visit a doll museum, puppet theatre, folk research institution, toy industrial complex, toy stores such as RCS Toys, markets and give an interview with them", disclosed Hyun Lee in her introduction mail,  to Hima Sailaja Theerdhala, VSLI Engineer turned Fashion Designer, Entrepreneur, ISB Alumni who gave India doll of its own. 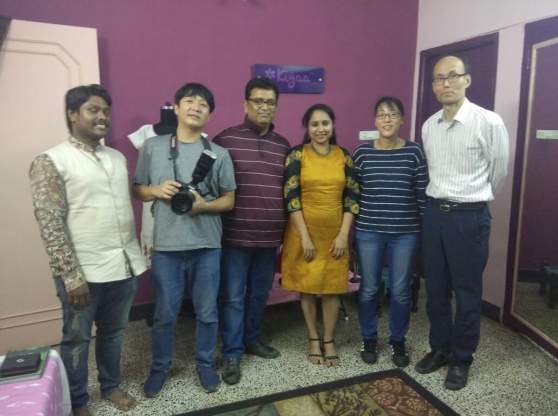 "I'm interested in your design studio and Kiyaa dolls. While I Googled for India's own fashion dolls, I found some articles on your works. They said that you created Kiyaa. I want to deal with the doll's social role. Therefore I think that it will be meaningful if you introduce me beginning of your work, programs, and plans' Hyun wrote before meeting Sailaja.

The whole research will result in the publication of a research report in October next year. It will be distributed to Korea and international academic associations, libraries, and research institutes.

The pride of India, Kiyaa, has realistic India face, features, contemporary teenage character, carries heart & soul of the nation. It is the doll for girls and collectors who are looking for a doll that represents real India girl says Sailaja. And not it is all the more pride that it would be exhibited to the world audience through a Children's Museum in September 2019 by NFMK. It is pride moment for me said Sailaja.

Sailaja's start-up company, Shel Studio has worked on the doll for many years.  We have already invested little over an INR ten million on product development, market seed program, Shailaja informed.  It is named Kiyaa, means ‘cooing of the bird’ in Sanskrit.

“Many children worldwide proudly own UAE 'Fulla,' Korean Pullip, Iranian Sara or American Barbie." We also have Indianised Barbie, but, its character is still American teenager. “It is a matter of great pride for every Indian to idolize their doll rather than western dolls or Bollywood celebs,” says Sailaja