The video posted by the young actor shows her breaking down several times and recounting the horrid torment. The arlines said it had no idea this happened until they descended for landing

A viral video of a teary-eyed Zaira Wasim breaking down while alleging that she was molested by the man sitting next to her is spreading like wildfire on the internet. The Dangal actor's allegations that she was molested by a co-passenger, who rubbed her neck and back with his hands and foot during a Delhi-Mumbai flight, has prompted the Maharashtra State Commission for Women to seek an inquiry into the "shameful" incident.

The airline took to twitter condemning the incident. It apologised to Wasim and said it was probing the incident, asserting that it has "zero tolerance" for such behaviour.

The actor had alleged that the Airlines remained mute spectators and did not help her. She narrated her ordeal on Instagram via a live video. Her tear-stained face and laboured breathing was hint enough of her torment. 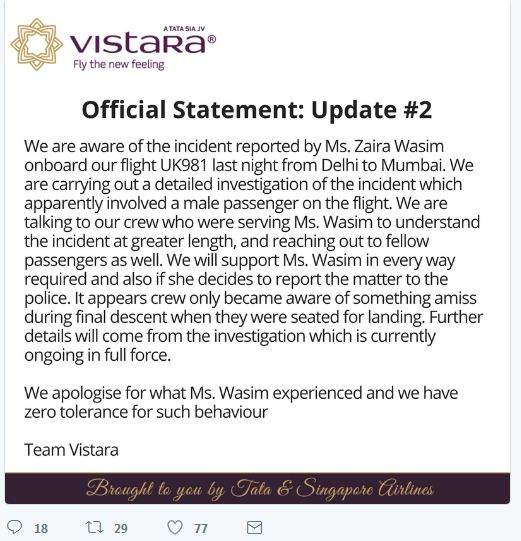 Creep Alert: Wasim said she was on a Vistara flight last night from Delhi to Mumbai when a co-passenger sitting behind her put up his feet on her armrest. He claimed he was "resting it because of turbulence"

"So, I was in a flight travelling from Delhi to Mumbai today and right behind me one middle-aged man who made my two-hour journey miserable. I tried to record it on phone to understand it better because the cabin lights were dimmed, I failed to get it...," she said.

"The lights were dimmed, so it was even worse. It continued for another five to ten minutes and then I was sure of it. He kept nudging my shoulder and continued to move his foot up and down my back and neck," the Kashmiri teen, who shot to fame for her stellar role in Aamir Khan's blockbuster "Dangal", said in the post. 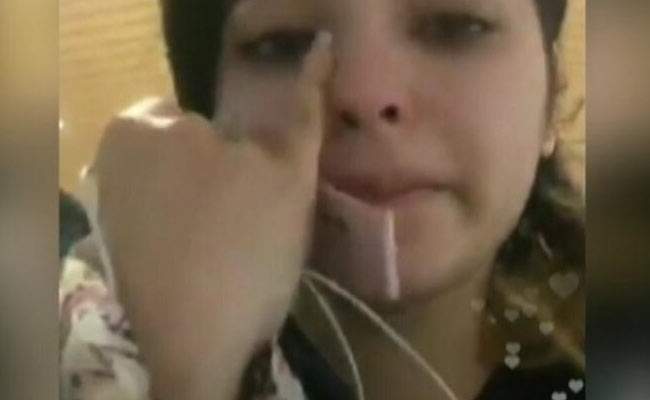 This is not done, I am disturbed...Is this how you're going to take care of girls? This is not the way anybody should be made to feel. This is terrible!

"No one will help us if we don't decide to help ourselves. And this is the worst thing," she added.
Terming the incident as "shameful", Maharashtra State Commission for Women's (MSCW) chairperson Vijaya Rahatkar said they will seek a detailed inquiry into it from the Directorate General of Civil Aviation (DGCA).

"The commission will direct the DGCA to conduct an inquiry into the matter and will also inquire into the steps taken by Vistara to address the complaint," Rahatkar said. She demanded that there should also be an inquiry into why the cabin crew did not help the actor.

"We have directed the Mumbai police to look into the matter immediately. It is sad that none of the co-passengers came ahead to help Wasim. We are with her, and will ensure she gets justice," Rahatkar said. Meanwhile, a woman police official has been sent to the hotel in Mumbai where the actor is put up to record her statement, a senior police official said. Appropriate action will be taken after her statement, the official said, adding that no case has been registered so far.

The aviation regulator DGCA has sought a report on the incident from the airline, sources said. Former Jammu and Kashmir Chief Minister Omar Abdullah also demanded action against the male passenger.

"The passenger should be identified to the police by @airvistara & a case filed for legal action. None of this "he fell at my feet so I forgive him" rubbish!" Abdullah posted on Twitter. 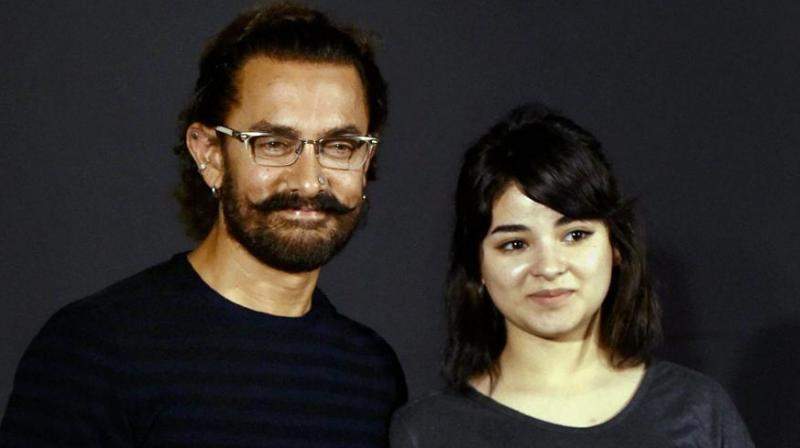 No comment: Surprisingly screen-daddy and mentor Aamir Khan is yet to express his reaction to the incident

Later, Vistara's chief strategy and commercial officer Sanjiv Kapoor in a statement said, "We are aware of the incident reported by Zaira Wasim on board our flight UK981 last night from Delhi to Mumbai. We are carrying out a detailed investigation of the incident which apparently involved a male passenger on the flight."

"We are talking to our crew who were serving Wasim to understand the incident at greater length, and reaching out to fellow passengers as well. We will support Wasim in every way required and also if she decides to report the matter to the police," he said.

Kapoor said it appears the crew only became aware of something amiss during final descent when they were seated for landing. Further details will come from the investigation which is currently going on in full force, he said.

Enough: Minister's Mehbooba Mufti and Omar Abdullah were quick to Tweet their discontent regarding the incident

"We apologise for what she experienced and we have zero tolerance for such behaviour," Kapoor said.
Condemning the incident, Shiv Sena spokesperson Neelam Gorhe said a criminal offence should be registered against the male passenger and he should be asked to apologise for the indecent behaviour.

"Those travelling by airlines usually work in good positions in companies. If the owners of such companies do not take suitable action against such employees their conduct will never change," Gorhe said.