Suicide letter has been replaced by authorities, say Osmania students after topper's suicide

The student who committed suicide was a topper, but his letter said that he was committing suicide because he was scared of exams. This is why students claimed the letter was a fake and protested

Students of Osmania University are claiming that the suicide letter left behind by E Murali who died yesterday has been replaced with a forged one. In the suicide note which is in the possession of the police, Murali said that he was committing suicide because he feared the upcoming examinations. But Murali was a class topper, so his peers are asking why he would have been pushed to suicide.

Murali is a first-year PG student from the Physics department who hung himself in the men's room in the University hostel on Sunday. The suicide led to heavy protests on campus. Police are saying he was stressed about exams, but the students claim it was the delay in job notifications that pushed him to commit the act. 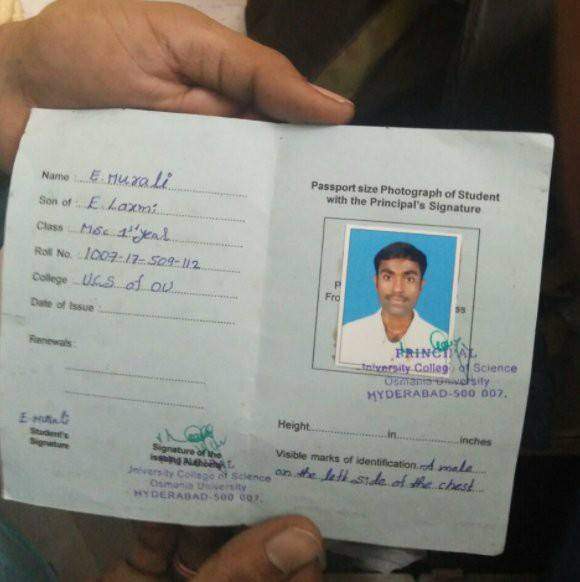 Seeking justice: E Murali was one of the brightest students in his class so the suicide came as a complete shock to his peers

The protestors claimed that friends of the deceased did not recognise the handwriting in the letter and are saying that the original letter is missing. In the original letter, the student allegedly wrote that he was upset with the TRS government over unemployability rates, especially because he did not receive his job notification.

Various student bodies on campus had demanded a shutdown but things began to get out of hand early last evening. Police took over the campus and started lathi-charging the students. Students have also alleged that the Police also arrested around 20 people and slapped cases on the more prominent students.

Pradeep A* (name changed)  who was one of the people detained by the police said that several students had been injured in the lathi charge but the protests would carry on. "We want to ensure there is a committee that will investigate the suicide. Murali comes from a very poor background so we want to make sure they are compensated with 50 lakh rupees and also provide at least one family member with a job," he added.