Rahul Gandhi to Modi: Why is Gujarat on 26th position in terms of expenditure on education?

Taking his "one question a day" series forward, Congress vice-president raised a question to Modi about the unaffordability of education in Gujarat

Posing the fourth question in the series "a question a day", Gandhi asked, "Why is Gujarat on the 26th position with regard to spending on government education? What wrong has the youth of the state done?" The Congress leader, who is leading his party's poll campaign in the western state, accused the prime minister of "commercialising education at the cost of government schools and institutions and hitting students hard with fee hikes". 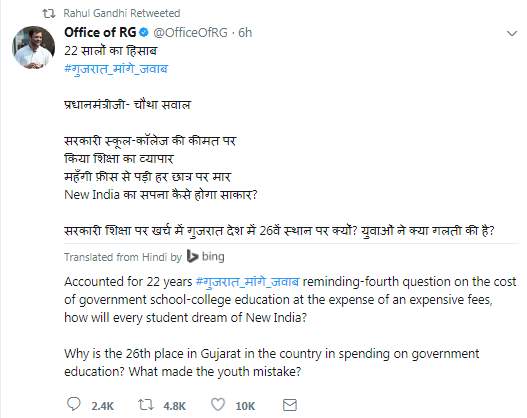 "How will the dream of a 'New India' be realised this way," Gandhi asked Modi, who has been canvassing for votes for his party for the assembly polls. Gandhi earlier asked Modi why public money was "squandered" in purchasing power at higher rates from private companies in Gujarat. He also asked why the people of Gujarat should pay up for the "financial mismanagement" and publicity by him.

He asked whether it will take 45 more years to provide new houses to Gujaratis as the incumbent BJP government in the state has provided only 4.72 lakh houses in the last five years against the promised 50 lakh. Gujarat, the home state of Modi and BJP president Amit Shah goes to polls in two phases on December 9 and December 14.