From K-Drama to earning third place in an international Korean speech competition, this aspiring Army Lawyer will have you wowed

To the people of Tamil Nadu, Korean may sound like a mix of sounds and incoherent speech that are as distinct as kimchi and chutney. But city girl Sadhana S has broken that stereotype and brought home the third prize in a Korean speech competition held in Korea. She also discovered that while there may be differences in terms of grasp and pronunciation, Korean and Tamil have "many similarities" in structure and vocabulary.

The K-Pop-loving law student studying in VIT, Chennai, recently won a Korean speech competition conducted by the InKo centre across 105 King Sejong institutions across the world. The entries, before the finals, were evaluated by a jury of experts in Korean language training of which 25 students made it to the second round. Sadhana was among the final 12 who were selected to participate in the speech contest held at the Korean Broadcasting System (KBS) office. She was one of 140 students from over 50 countries to participate in the programme.

But in a heart-touching gesture the sponsors, after finding out that she eats vegetables and that fish is infact not considered vegetarian in India unlike Korea, went out of their way to whip up some salads and non-meaty items

How it began: Though Korean as a language to her is just a year old, her love for all things Korean started in 2010 when she watched the Korean drama Boys Before Flowers (2009). In 2016, a two month event called K Pop Academy by the King Sejong Institute with K-Pop experts got her grooving to Korean music and dance and from there it was a course in the language at the InKo centre.

"We were all into K-Pop back then but thought it was a great opportunity for us to learn dance and music from experts. That's how I got into the InKo centre and really liked the atmosphere and decided to pursue Korean," she says. But had she been told a year ago that she'd win a Korean speech competition and  go to Korea, she'd either have looked at you with disbelief or as is a human way to de-stress; laughed on your face. 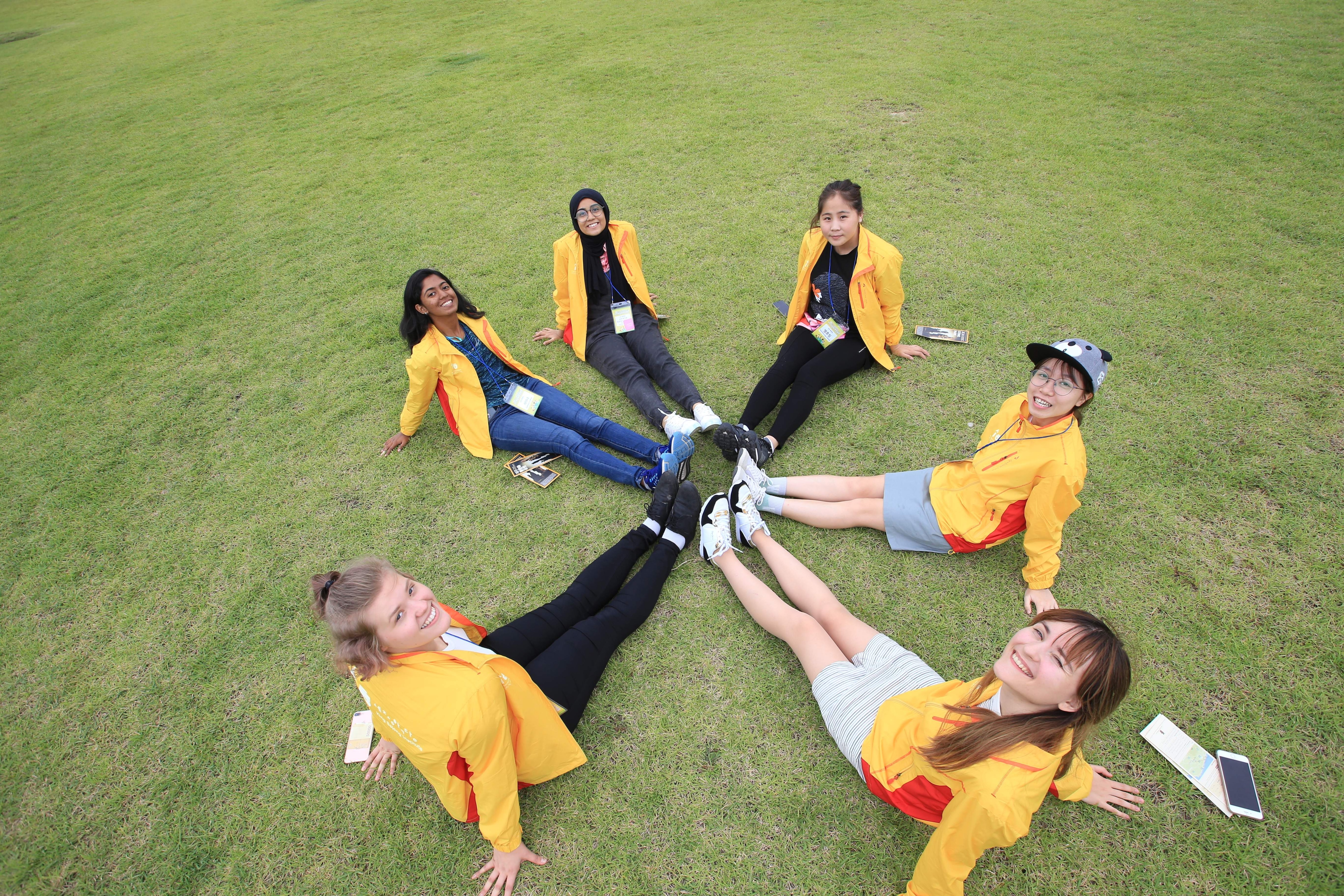 The process, however, was a long one she says, adding that unlike last year where the winners were immediately notified, she had to spend two long months awaiting the news, a ball of nervousness no less. It was a stressful 2 month wait where her recorded speech was sent to Korea for the jury, she recalls, albeit a little mournfully. But as she draws closer to talking about her trip, the excitement seeps back in.

I had to wait for two months before I knew that I'd actually be going to Korea. Even when the mail came I wasn't that sure and even a month before I had to leave I literally crossed the dates on my calendar and didn't go shopping till a week before I left the country, I was that nervous

Are you serious: The win came as a huge surprise for the chirpy fourth-year law student who says she was shocked, having only entered the realm of Korean language a year ago with most of her knowledge being from K-Pop or K-Drama. While the trip and the lessons learnt have been incredible, it did not come without effort and hard work. Sadhana spent two weeks before the competition working on her two speeches.

The students were divided into groups of four, and a different topic was assigned to each group with Kimchi v Cheese being Sadhana's. Members of each group had to then speak on the topic followed by a Q&A session on stage. Kimchi is a Korean pickle made from lettuce, radish or cumber, and cheese is something she's "eaten all of her life".

What she said: "Kimchi and Cheese are similar in lots of ways because they're both traditional items that have been around for thousands of years and have been in the world since before refrigerators and even then did not spoil. Somehow I like Kimchi better because cheese is readily available but kimchi is difficult and I can get it only at Korean restaurants." 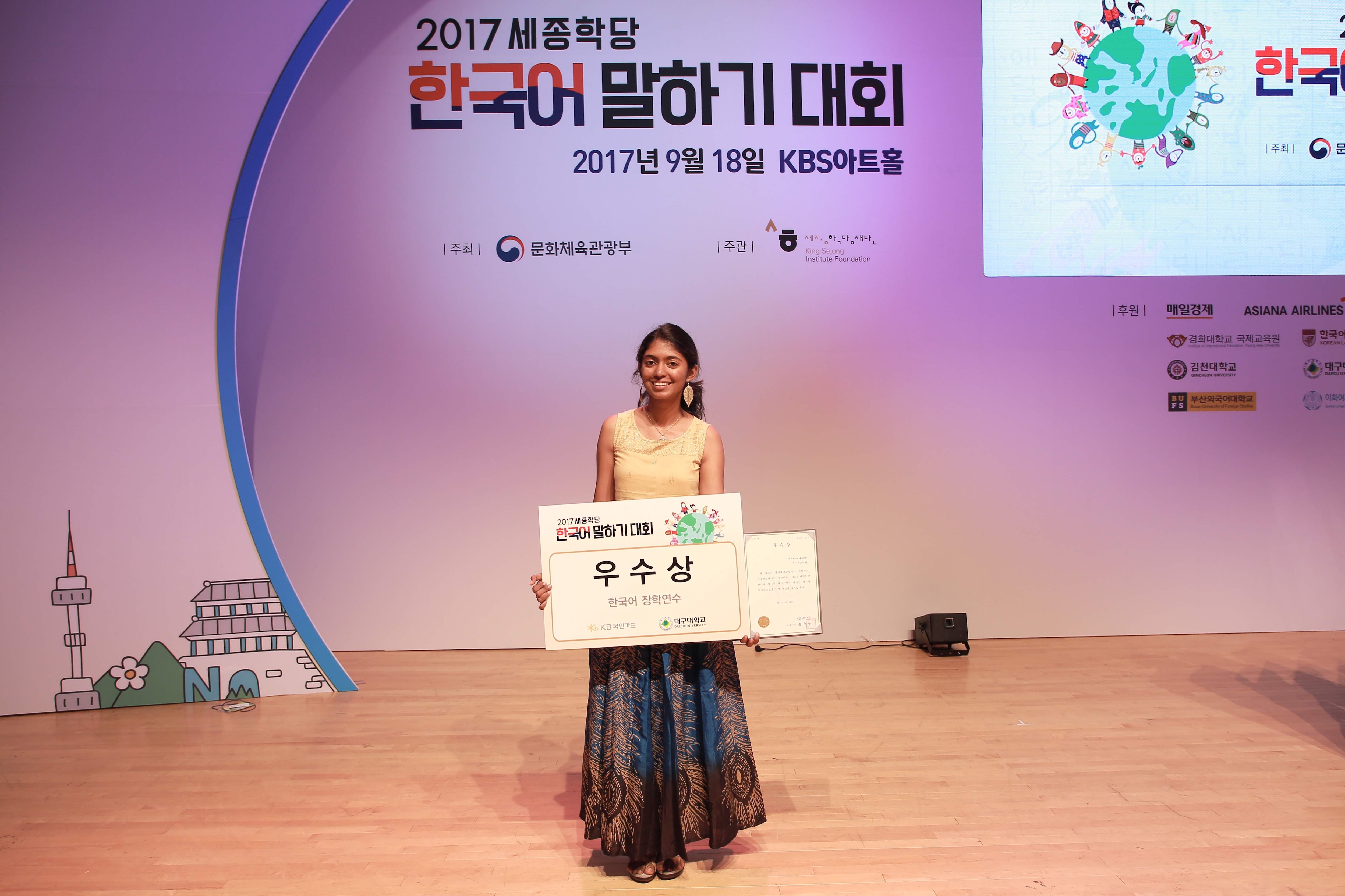 Not So Cheesy: The trip, and her win have been a distant dream that she would have dismissed had it been mentioned earlier

And is dairy or spice this girl's choice you ask? Well, she opts for Kimchi, a rare cuisine to soothe her cravings unlike cheese which "is always available".

The finalists were also taken to the Korean Broadcasting System (KBS) office and taught pronunciations and the ability to bring out the essence of those words by Korean announcers. While it was a tough task, Sadhana says it came easily to her because of the similarities between Tamil and Korean. "The two languages share similar sentence structure, alphabets and even some vocabulary," she adds.

Head in the game: Well,  it doesn't just stop here. Apart from going and being çheesy in foreign countries, she dreams of becoming an Army Lawyer and is currently studying an honours paper in International Organisations. She also volunteers part time at event management company Evam owned by stand up comedian Karthik Kumar and is part of the rescue team at the Blue Cross Chennai.

But while the preparation was a tough mix, you can't go to Korea and not experience it, whether by sight or through your foodpipe . While Asians are known for their carnivorous appetites, it was a tough task to expect edible greens for Sadhana, who is a pure vegetarian. But in a heart-touching gesture the sponsors, after finding out that she eats vegetables and that fish is infact not considered vegetarian in India unlike Korea, went out of their way to whip up some salads and non-meaty items.

"Ït was so touching, something I never expected them to do. I had prepared myself to eat some light salad or a starter but after they were told I didn't eat fish... because in my country fish is not considered vegetarian, they went out of their way no matter how fancy a restaurant we were at and got me vegetarian food," reminisces Sadhana.