How it is like for a man to wear a saree and step out of his house? Let's solve this criss-CROSS puzzle

Crossdressers are not new to India, neither is people staring at them strangely. But isn't it time to get over it? Here's what these men have to say about the lack of acceptability of the concept

In a country where women are subjected heavy moral policing over their choice of cloth, a man wearing costumes of a woman is sure to turn some heads around. Unfortunately, that's the last thing these men want.

Karan Vig, a fashion designer based out of Jaipur and London, believes in looking as pretty and presentable as he can. He finds his calling in rich drapes and designer sarees. And he doesn't shy away from embracing his picks in clothes. "If nothing else, I look prettier than those you give the judgemental stares," he says.

According to Hindu mythology, Bhagavata Purana describes Vishnu taking the form of Mohini, a dancing lady, to dissuade the demons. Ardhanarishvara is a concept that talks about the merge of God Shiva and Goddess Parvathi

We agree. But is it always that easy? To crossdress and not care about what does the world think of you? According to Karan, it is all perspective. "You might find it weird but I get motivated when someone questions my cross-dressing. I am going to be stubborn if you make me feel inferior," he says.

As rebellious as it is, it is also unfortunate that someone is scrutinised for something as basic as clothing. Vikram S aka Delfina, a cross-dresser and believes so too. In fact, if given a choice, he would not use the word crossdressing at all. "Who decided that what's normal dressing and what's cross? There can be no one particular definition to it," he says, rather believes. He further adds that it is not about the dressing but the interpretation of gender in our society. 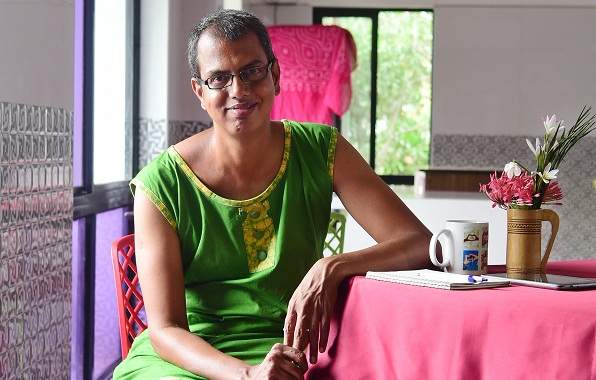 Gender bender: Delfina believes that the problem that I have to deal with are the problems a woman has to deal with, like being up for a display and being unsafe

"In the contemporary society, the children are forced to confine to certain dressing norms. They are made to wear certain kinds of clothes. People say it is related to Biology. I want to ask which aspect of Biology teaches you that? Or why is floral pattern related to certain gender? I do not understand that," he says.

But there were always challenges that he had to face. But again, he does not believe in gender-specific clothing.

I am just choosing what appeals to me. I am not trying to prove any aspect of masculinity or feminity.  I don't think that is too much to ask for

Moreover, there is a greater problem though and it is not about the clothes. "Feminity itself is seen as a sign of weakness. I think the problem that I have to deal with are the problems a woman has to deal with, like being up for a display and being unsafe. This is just because I wear the clothes that society expects them to," he says.

In the end, it all boils down to accepting what you are and who you want to be. For Karan and Vikram/Delfina, too, is the same case. Vikram/Delfina says,"There are many places where I can't wear what I want. But I try to be true to myself and go for it. You have to accept your personality at some point," he says, Karan would agree. "This is what I am. As long as someone is not paying my bill, I am not bothered what they think of me," he shoots.

Well, knowingly or unknowingly, there is clearly a fight that these men are fighting. It's for us to see how long will it take before people don't stare people for the kind of clothes that they wear.