Reena Puri, the lady behind all the nostalgic memories you had in school, talks about Amar Chitra Katha and Tinkle

For most Indian kids born before the year 2000, Amar Chitra Katha and Tinkle were synonymous with growing up, weren’t they? Remember those days when you’d wait for school to get over to pick up your own copy and indulge in a world of stories? Be it Shikari Shambu or Suppandi, Karna or Krishna — you’ve loved all their stories. And how many of you had written letters to Tinkle and received personal replies from Anant Pai (aka Uncle Pai)?

Nostalgic much? Now, let me introduce you to Reena Puri, Executive Editor of Amar Chitra Katha. Having been in the comic book industry for as long as she has, it shouldn’t surprise you to know that she was once the Assistant Editor of Tinkle, who’d penned many of the most adored short stories you’ve probably read as kids. Tale time: For Reena, the story of Ammu, a fisherman's daughter that she penned for Tinkle is her favourite

When we caught up with her prior to the Neev Children’s Literature Fest, Bengaluru’s first lit fest for children, we initially expected someone as vibrant as her to have grown up reading Amar Chitra Katha. “Haha..no, I’m much older than that,” she says, laughing.

But what’s that cliche about age being just a number? At 60, she still engages us in stories from the comic world with the enthusiasm of a 20-year-old.

Reena is involved in rescuing animals. She owns two rescue dogs and has founded an NGO for animal welfare in Mumbai. If given a choice to be an Amar Chitra Katha character, Reena would be a mix of Jagdish Chandra Bose, Mirabai, Rani Laxmi Bai and Jim Corbett

Were you always inclined towards comics?
I loved to read. I loved books and comics. But I got interested in comics after I joined Tinkle in 1991.

Even though there are various genres in Amar Chitra Katha, why is mythology popular?
Our mythology is a living mythology unlike other countries, where the mythology is the past. We still worship our gods. Because of this, adults want kids to know these stories. Many people still tell me that mythology is history. Everybody connects with it easily and it’s relevant.

How would stories help a child?
It is important for children to read and to hear stories. A good story has the potential to mold a child’s character and comics are a good medium for that. My younger son would refuse to read. He bothered to flip a few pages only after he saw Tinkle. Children pick up comics more easily because they’re colorful, easier to read and have a lot of pictures.

Amar Chitra Katha requires a lot of research. We have to go very deep into the subject and prepare the script. My script writer for Mother Teresa went to Kolkata and volunteered with the Missionaries of Charity for a week

What role should a parent play in developing this habit?
Parents should read to their child. Read them a nice story before they sleep. My father would create a new story for me every night. These were very precious moments. It also strengthens the bond between them.

Of all the stories in Amar Chitra Katha and Tinkle, which one is your favourite?
My favourite story is one called Ammu that I’d written for Tinkle long ago. It was about a fisherman’s daughter. Her father favoured his son all the time and the little girl felt ignored. At the end, she shows her father that she can be as good as her brother. She goes out to search for her father in the sea. Amul picked up the story and made a booklet out of it later. 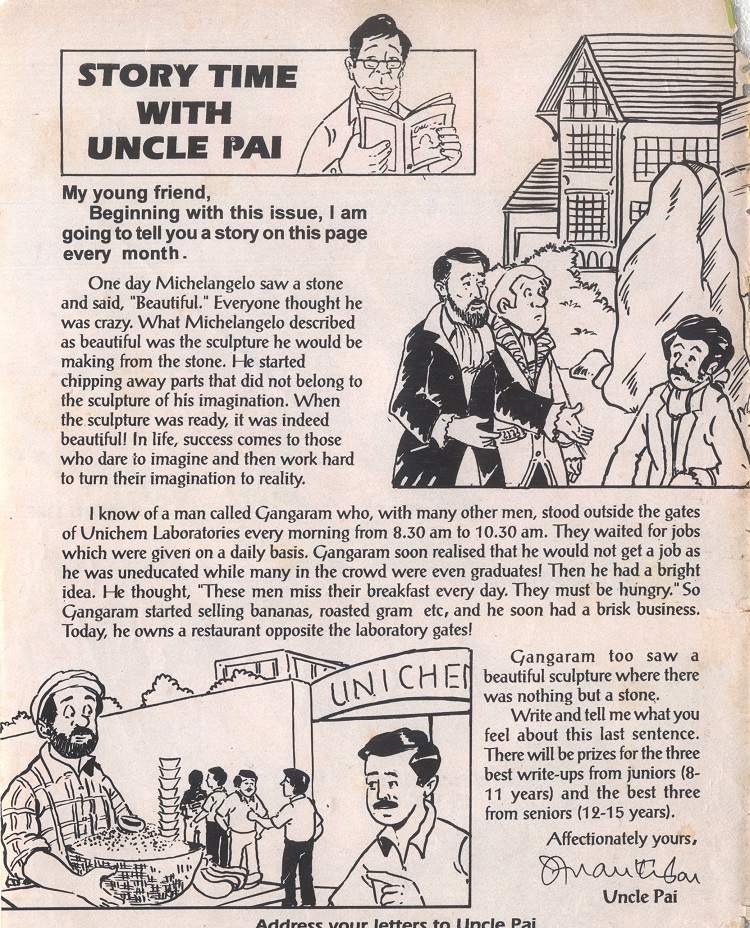 Tell us a little about your time in Tinkle.

We’d get around 10,000 letters a month from the readers. There was someone who’d go through all these letters. Many of the children would send us story ideas. Even if there was a germ of an idea, we’d pick it up. There were mysteries, adventures, and everything. Approved stories were sent to Anant Pai. Each of those letters was answered personally by Uncle Pai, even if the message was about a rejection. Children were, in fact, encouraged to write better.