It's official! Terribly Tiny Tales are launching their first book through an FB live with Tanmay Bhat!

We’ve all read TTT online and loved them. Now it's time to read these tales on paper! Find out about the story of their first book and the story behind it

What does having more than one million followers on Facebook mean to the founders of Terribly Tiny Tales, Anuj Gossalia and Chintan Ruparel? A lot, of course! But at heart, the duo are from a generation that has grown up reading books, so books will always be more special to them. "It's something tangible in our hands," says 29-year-old Chintan. And that is how they feel about their first book, published by Penguin Books. Agreeing wholeheartedly is 30-year-old Anuj who adds that, "it feels nice in a way to see ours and the TTT community’s favourites have some sort of permanence through the book." And so, 250 stories of 140 characters each went into the book, which has been four years in the making, during which the duo sifted through more than four lakh stories with just one agenda — "if we were to open the book ten years down the line and read the story, would we still want it in the book?" Themed to go
With the turn of every page, you enter a brand new world. And this was intentional. Though debates on whether they should have a common thread running through the stories or divide the book into
different chapters arose, they decided to settle with simplicity. Much like their posts, the stories in the book feature in white against a black background. "We decided that this is the best way for the book to operate," says Anuj, who confesses that these stories aren’t the most viral ones, but they are the ones that have connected in ways no other story has. The duo has spread out the mood, making sure tales of the same genre don't feature side by side, thus making this journey of 312 pages a roller coaster of emotions.

Why they did it
Every workshop they conducted, every feedback they ever received about what the community expects from TTT next, be it web series, short films or a book — the latter always trumped every other option. "It's like they wanted it just as much as us," says Anuj. But on the other hand, he mentions how a couple of years ago they had approached a few publishers and for reasons unknown it did not work out. This time around it was Penguin that approached them to write a book, and with the backing of an international publishing house, they feel it clicked because it fulfils their objective of reaching out to a larger, global audience. Along with this, Tanmay Bhat, co-founder AIB will join the TTT team for their first Facebook live event between 12.30 and 1.30 pm tomorrow to announce the launch of their book Honestly, the only reason I’m involved in the launch is because I get to get my hands on the book before anybody else!

The clientele
Cornetto and United Colours of Benetton are some of the clients that this page-turned-company has associated with. But this doesn't mean that they have forgotten their goal of storytelling. "We are not a sales platform. We are a platform to engage with the youth. So we chose to associate with brands that are excited about telling their stories, not plugging in products," Anuj clarifies. And outside the data and numbers, the most fruitful relationships have been with those clients who have believed in the power of storytelling more than anything else, he adds.

Insta hit
Calling Instagram a "sweet spot for our user base," the duo truly believe that the audience engages more with them on this particular social media platform. With more than six lakh followers, Instagram and even Snapchat have been seeing a lot more from the TTT team. Anuj credits this to the fact that most users on Instagram are below the age of 30, who connect to these ‘snackable’ stories naturally.

Going ahead, no matter how cynical we become as people, we want stories to survive and hopefully, TTT will still be there, adapting and moving along

Big plans
Scrolling through the posts of TTT, one doesn't just see stories, but there are also the Terribly Tiny Talkies, which are short films featuring Anupam Kher, Jackie Shroff and others. There is also Backspace, which are videos of texts exchanged between two people. Clearly, experimentation is a way of life for TTT. But their biggest one is yet to come. Early next year, they are looking to evolve their already launched app into a full-blown social media app. "We hope for it to become the de facto network for all readers and writers, where one can write stories, publish them and follow others. Think of it as an Insta for stories," says an excited Anuj. The team is also incubating a bunch of other video formats as we speak, so you can expect a lot more from TTT. 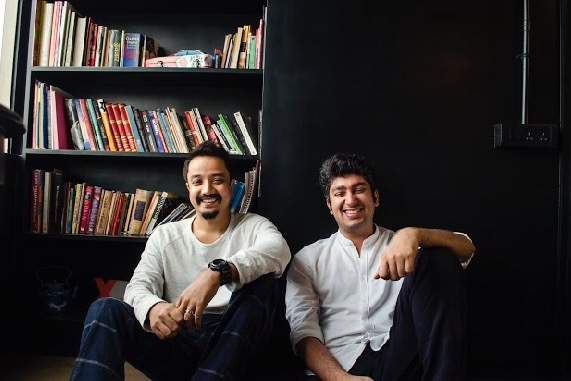 Two together: The founders in one of their jovial moods

Tips from TTT
When Anuj and Chintan started this format, they did not realise that it was possible to say so much in a limited number of characters. "So many words and sentences are unnecessary sometimes," says Anuj. So he advises future TTT aspirants to edit ruthlessly to get to the crux of the idea, trimming away the excess to write a story which doesn't only convey, but connects in a short time.

The moment of truth
When at the Jaipur Literary Festival this time, a curious thing happened. On January 21, the founders were to make their debut at one of the country's most renowned literary fests. They were given a venue with a seating capacity of 50-60 and the duo internalised that even if it was half-full, they would be grateful, because there could be participants or panelists who would think of the widely viral tales of TTT as "a shallow reading experience." But to their surprise (not ours, mind you) the venue was bursting at the seams. Realisation dawned then that they were serving a community that likes to read but doesn't have the time or people who enjoy reading all kinds of formats.

Check them out at facebook.com/terriblytinytales/?ref=br_rs