Archaic system in BHU ensures that only boys have all the fun, female residents imposed with biased rules

Petty discriminatory rules include no access to free wifi in hostel, dress code, no non-veg food on campus and no participating in protests, none of which is imposed on the male students

On August 28, 2017, a public interest litigation (PIL) of gender discrimination at Banaras Hindu University (BHU) came up for hearing before Chief Justice of India, Deepak Mishra.

Although the petition was about the suspension of eight students of BHU Mahila Mahavidyalaya, it brought to the fore a slew of rules and regulations forced only on BHU's female students no non-veg food menu in the hostels, no talking on phones at night, no participating in protests and no venturing out after sunset.

So was the guard who, when contacted by the victim of sexual harassment on the evening of September 21 on campus, instead of helping out, gave her some sniping remarks about being 'out so late', just following the BHU rule book?

The BHU administration has been saying that these rules have existed since the beginning and are placed for the benefit and safety of female students. But when it actually came to the safety of a student, the administration showed a collective failure on September 21. The patience of the girls, subjected to such incidents every now and then, has hit its threshold

Archaic and discriminatory rules for girl students in the garb of a 'protective cover' at BHU have been hitting the headlines for over a year now. It is alleged that the administration has been showing a new found alacrity in enforcing these rules ever since Prof GC Trpathi took over as Vice Chancellor three years ago.

However, when their petition couldn't come up for hearing due to paucity of funds, noted lawyer Prashant Bhushan came to their help and filed a petition in the Supreme Court seeking annulment of such discriminatory rules. The CJI agreed to look into the matter.

Bhushan, assisted by lawyer Neha Rathi, apprised the apex court of the rules enforced on the girls by the BHU. Girl students were also not allowed wear shorts to the mess or access free wi-fi and internet in their hostel rooms. The same restrictions were, however, not imposed on  male students. Girls also cannot eat non-vegetarian food on campus or participate in protests, demonstrations or even political debates while those restrictions do not apply to boys.

"The petitioners submit that there have been various instances of gender-based discrimination in the rules and regulations at the MVV Hostel inside the BHU campus. A girl student is asked to leave the MVV hostel if found to be flouting any of these discriminatory rules," Bhushan told the bench. 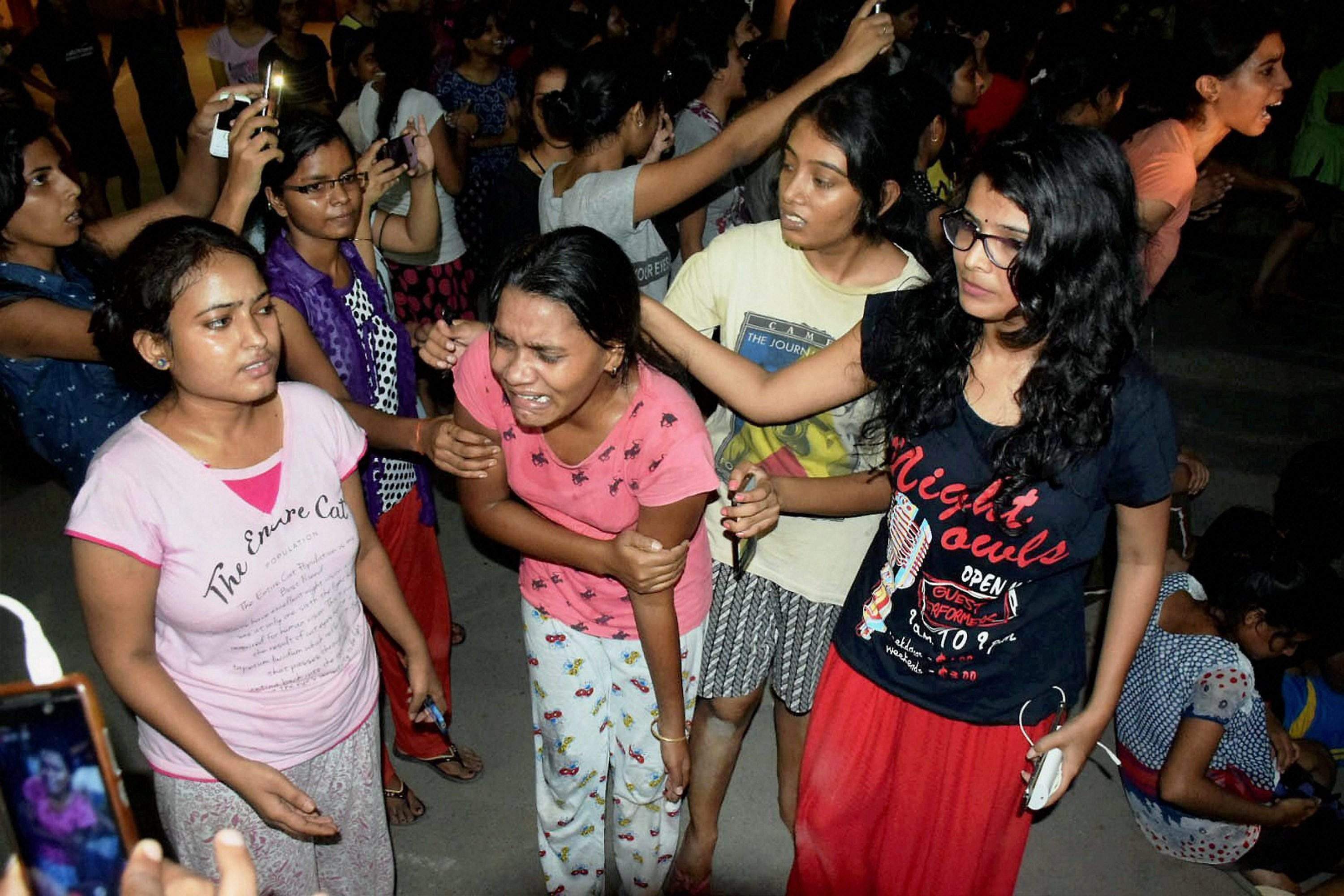 Violent Vents: Several female students and hostel staff were seriously injured in the recent clash between students and police

This insensitivity towards girls was evident on September 21 and snowballed into a bizarre violent scuffle between students and  police called by V-C Prof GC Tripathi to muzzle protesting voices instead of listening to the victim and taking timely action against her perpetrators.

What some of them had to say:

This kind of harassment is routine on this campus now. We face discrimination of all sorts. We are living a life of isolation

-A hostel student in Trivani sankul

Our silence was construed as our weakness. Enough of ridiculous  suggestions and mere lip service. We can't be taken for granted anymore. We not served non-vegetarian food in hostels since it is not there on the menu of our mess. We are not allowed to have eggs even but boys have no such restrictions. They enjoy everything

There is hardly any rule for boys. While they are allowed to be out till 10 pm, we have to be indoors latest by 8 pm. For us registers are maintained. It's not that we don' t want to follow the rules but disparity should not be there. We can't be subjected to suppression any longer. We have shown it this time around and now there is no looking back. We feel like second class citizens on this campus and now even our security is not guaranteed

(This article was first published in the New Indian Express)