U.S president Donald Trump imposes Muslim ban in the country, but judges are against it. The judges claim that the travel ban likely violates the Constitution by disfavouring Muslims

The nearly two-hour hearing on Monday before the 4th Circuit Court of Appeals in Richmond, Virginia, came about two months after a federal judge in Maryland imposed a nationwide halt to the core portion of the President's revised executive order.

"He's never repudiated what he said about the Muslim ban," Judge Robert B. King said, underscoring a key rationale for the Maryland federal district court's halt to the ban.

But Judge Paul V. Niemeyer questioned the plaintiffs' attorney about his motive for opposing the ban.

"If some other candidate had won the election and issued this order, I gather you would have no problem with that," said Niemeyer, who was appointed by former President George H.W. Bush.

District Court Judge Theodore Chuang said that the travel ban likely violates the Constitution by disfavouring Muslims, and the Justice Department appealed that decision in March.

Jeffrey Wall, the acting solicitor general, however, argued that Trump's statements about Muslims prior to taking office should not be considered evidence of discrimination. 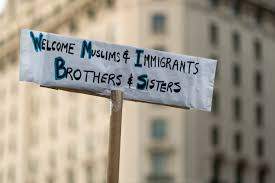 Trump made it clear he was not talking about Muslims all over the world, that's why it's apparently not a Muslim ban.

Normally, such an appeal of a district court's decision would be heard by a randomly assigned panel of three judges, and the losing party may ask for it to be reheard by the full court.

Yet in this case, the judges on the 4th Circuit decided it should be heard by the full court -- otherwise known as "en banc" -- in the first instance.

The suit in front of the 4th Circuit on Monday was brought by several refugee rights organizations, along with individual plaintiffs who claim the executive order, if allowed to go into effect, would separate them from loved ones abroad.