Binu Krishnan, Ananthu RL, Basheer C, Midhun Madhav and Midhun Krishnan of Sree Narayana Guru College of Engineering has come up with an efficient way to tackle the shortage of potable water

A group of students from Sree Narayana Guru College of Engineering and Technology, Payyannur in Kerala, has come up with a device that could turn atmospheric vapor into potable drinking water. It had been adjudged the best work among the 180 papers received for the National Conference on Technological Advancement in Engineering Aspects (Nactae) 2017 that concluded last week.

It all started when five fourth year mechanical engineering students - Binu Krishnan, Ananthu RL, Basheer C, Midhun Madhav and Midhun Krishnan - was on the lookout for an idea to be presented at Nactae 2017. They were unanimous in their resolve that they wanted to create something that would be of some social relevance and has the potential to be developed beyond the confines of a college project. "We wanted to work on something that has a real social significance and the question of clean drinking water was something that was on the top our minds. But, we were not sure on what exactly has to be done," says Binu Krishnan. 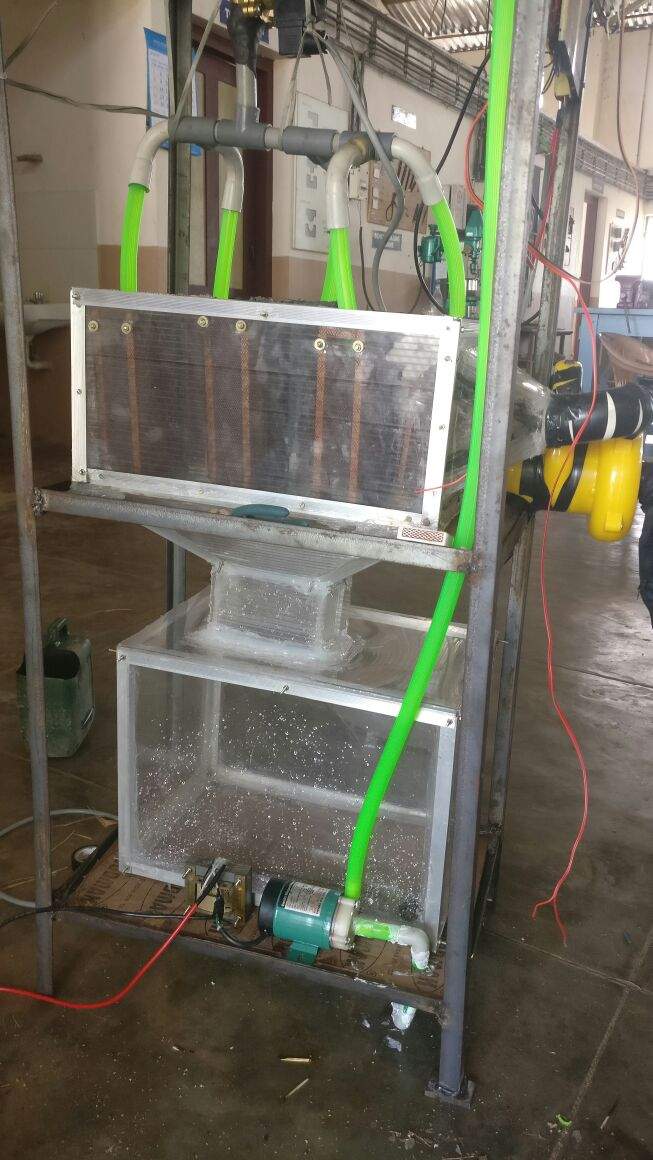 Water machine: The devide made by the students that could turn atmospheric vapor to drinking water

Enter Chandrajith, a professor at their department. He suggests the students to check out the process of wet desiccation, a method of extracting water from air through absorption. After doing their research on the process, the students became excited with the idea of creating water from thin air. "Desiccation is a process that is not quite popular when it comes to making water out of vapor. The popular processes followed world over were pressurization and condensation, which consume lot of energy and were expensive. But, desiccation consumes less energy and is an underexplored option," said Chandrajith.

The gang of five took to the project with all their enthusiasm. They decided on calcium chloride as their desiccant, the substance that would absorb atmospheric vapour. The design of the machine was completed much before the time they officially launched the project. But, it was put together in the last days leading up to the conference. As the process involved a lot of chemistry, which is outside the expertise of the teacher and the students, the vice principal and professor of chemistry K Ravindran chipped in with his knowledge.

Desiccation is a process that is not quite popular when it comes to making water out of vapor. The popular processes followed world over were pressurization and condensation, which consume lot of energy and were expensive. But, desiccation consumes less energy and is an underexplored option

In its present state, the machine could generate close to 3 litres of water after working for six hours. "But, it is just a prototype now. If we can do it in an bigger, industrial level, more water could be generated in less time and more cheaply," says Binu. The machine cost them more than Rs 15,000 and is not yet in a stage where it could be installed in individual households or offices. "Still, a lot of work has to be put in for it to be converted into a commercial product," said Chandrajith.

Do they have plans to enter the commercial market? "Right now, all of us are in the final semester of the course. Hardly, anything other than the final exams enter our mind," quips Binu. But, he adds, the recognition for the project has given them a fillip to work on it after their course is done.