If there aren't enough jobs, there will soon be bloodshed, warns  R Sarathkumar

AISMK President R Sarathkumar talks about how FDI, a more modern education system and stricter laws are the only way to ensure the youth of today don't end up revolting when the jobs dry up

R Sarathkumar is one of the few heads of a political party in Tamil Nadu who will tell you that he doesn't want to be the next Chief Minister. Rather idealistically, the actor-turned-politician says that it would give him more joy in empowering a young, educated man from the rural heartland to get that top spot. Incidentally, the AISMK founder-president is one of the few active politicians who hasn't started an engineering college, as has been the wont these past few decades. Reflecting on capitation, violence against women and the need for FDI in education, Sarathkumar opened up on a host of issues. Excerpts:

You were one of the few people who said that you got why colleges took capitation. That's not a popular thing to say.

There has to be a total change in policy when it comes to capitation. I'm not for it at all. Private colleges are pumping money into colleges and they are very clear that they have to make money out of it. And they start thinking that the infrastructure they need to provide requires resources. If they run at a loss, they can't run an institution. The way to ensure there is funding is the government finding ways to bring FDI in education — this will bring in uniformity.

Today, a lot of engineering colleges are empty, several others are closing down. In a country where college education is still low, isn't this a bigger issue?

It is sad that institutions are closing down. It's because people are unable to pay huge amounts of capitation. So many engineering colleges are empty, nobody even goes there. This mismatch will really create a huge problem. We talk proudly about how we have one of the youngest populations in the world, if they're jobless and educated, there's going to be a revolution and there will be bloodshed. 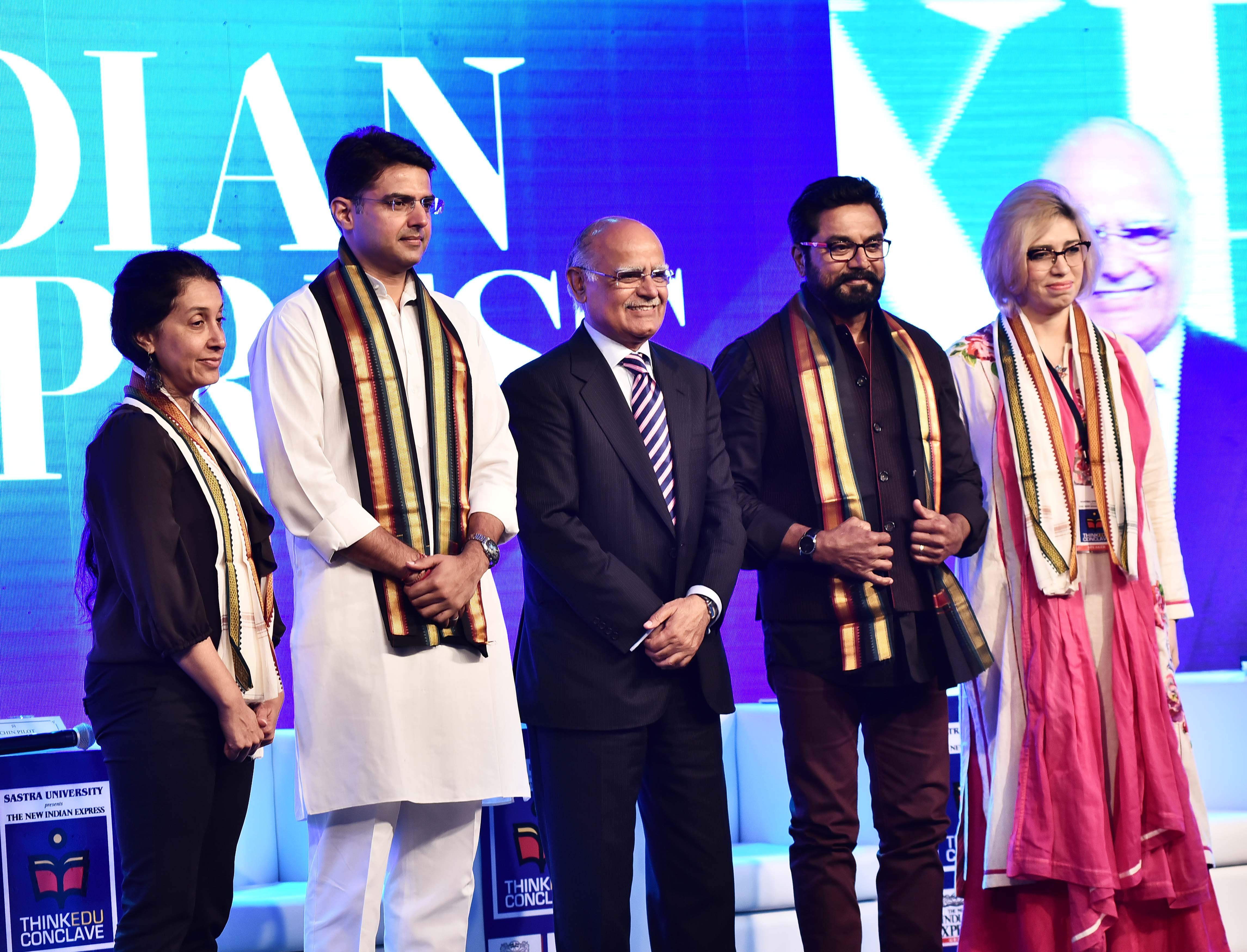 EduTalk: R Sarathkumar, along with other panelists at the ThinEdu conclave

They're already coming together en masse for issues like Jallikattu and Neduvasal. Can this boomerang on them?

Educated, unemployed and frustrated. That is the issue bothering youth today. Boys from small towns are exposed to things they've never been exposed to. They want to be America overnight, but you're some 150 years behind - how will it happen? Reverse migration is a real issue. Sons of farmers want to study engineering and leave their villages. They want to move in different social circles and leave their village lives behind. Amitabh Bachchan keeps talking about every every villager needing to have their own toilet, but this doesn't exist there. The villager doesn't have a proper sewage system or toilets. He doesn't want to take his affluent friends back there and show the village where he comes from. I want to educate and empower this youth to understand how to live. I don't want to be the future CM of Tamil Nadu. I'd rather make this youngster worthy of being the CM of Tamil Nadu.

Recently, your daughter Varalaxmi came out and posted on social media about how a studio head propositioned her. Crimes against women are increasing. is it frightening that most of the perpetrators are young men?

Every profession has it's drawback, not just the film industry. I won't say men will be men, because there are decent men too. It depends on the bringing up of the individual. Men should know where to draw the line in a relationship. Not every man gets the woman of his dreams and so maybe, he starts thinking its the only way to get his woman. And that's how the attacks begin. He begins to think that he won't get a good looking girl. People are going to look at your personality, your position, how you've come up, your character. That will attract women to you. That has to be inculcated in the child. Women becoming empowered is bothering men and as competition goes up, a woman has a better leverage to propel herself to success and that bothers men. This is pushing up crimes against women.

They say that movies are adding fuel to the fire. Stalking is one particular aspect that some movies have glorified recently. As a former head of the Nadigar Sangam what's your take on how much cinema influences today's 'angry young man'?

I don't want to criticise scripts today. But when you go to the movies, what do you see? Your hero is jobless. He leaves the house and his only aim in life is to get a beautiful girl and marry her, even if she's engaged to someone. Do you mean to say that it's OK for a man to not have a job but run behind a girl full-time? These are the scripts that bother me. It may be entertainment, but it has to have some value, I don't want a sermon or something that is preachy. Every other film that I've seen recently is depressing me. You always have a man, who may be from the lower strata of society and he will always want to get a girl who is very rich. 'Why can't I' is the question that a lot of people ask themselves when they watch such movies. I used to watch MGR movies, where he doesn't drink or smoke and I was inspired by that. There is a certain amount of hero worship, but that has to be within the parameters of morality.

What's the solution? Not every woman can talk about it openly.

Women should come to the fore. They need to be independent and think out of the box. They have every single right and they should not lean on old sayings about how women should be seen and not heard. They have to fight for themselves and be bold in their approach. That is what is required of women across the country. There is so much violence against women that it is depressing that so much is happening in our so-called educated society. Stricter laws and better implementation are what we need.

Some colleges are still keeping boys and girls apart, in buses, classes, everywhere. They call this segregation a type of 'discipline'. Isn't that adding to the issue?

They're still debating whether sex education needs to be a part of the curriculum. Why not? My son is 12. I'm talking to him about these things. I am telling him about physical and hormonal changes that he will undergo. It's better to tell him now rather than him finding out later and not knowing what is right and wrong. I think raising children in a sheltered manner has spoilt them. Social media is bringing youngsters together. Nobody can stop them from moving together. Parents need to teach them values, draw a lakshman rekha and give them independence. By segregating them and not letting them talk to boys and girls, that has to go. Moral policing needs to go, When a man and a woman, who are young, literate, modern want to talk, you cannot stop them.